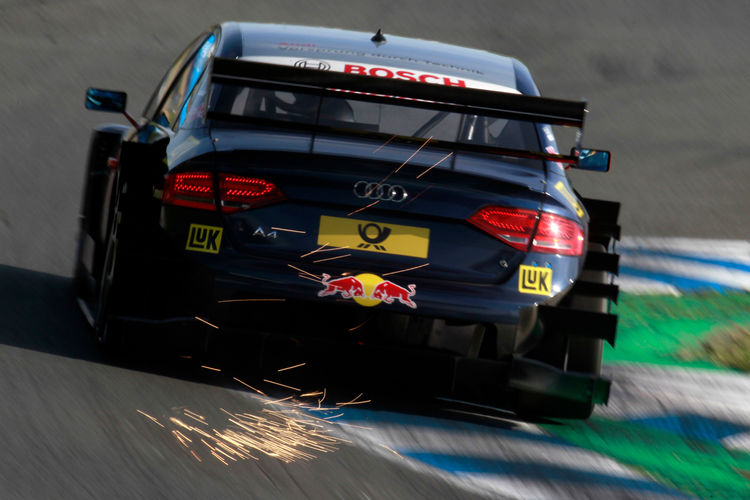 The 2010 DTM will be decided at the German finale at Hockenheim on October 17 at the earliest. After clinching third place at Oschersleben Mattias Ekström (Audi Sport Team Abt Sportsline) is the only Audi driver with chances of winning the title.

Timo Scheider on the other hand, who was on the verge of achieving his third consecutive win at Oschersleben in front of a crowd of 62,000 spectators, is no longer in the race for the title. An early second pit stop put Scheider between the two Mercedes cars that had started from the front row and in front of the leader of the standings, Bruno Spengler. With record laps and a new DTM track record the reigning champion even seemed to be in a position to overtake the quickest in qualifying, Paul di Resta, but a puncture on lap 34 deprived Scheider of a possible victory.

“That was very disappointing,” said Head of Audi Motorsport Dr. Wolfgang Ullrich. “We saw the good pace that Timo (Scheider) had. We did all the right things in terms of strategy and put him in a position from which he was able to win. But apparently it just wasn’t meant to be. Unfortunately Timo, of all drivers, was the one to get something in his tire ...”

Mattias Ekström, who in his 101st DTM race was unable to keep the pace of the front runners on the first two sets of tires, benefited from Scheider’s misfortune. On the third set the Swede managed to keep Gary Paffett at bay and secured third place. After this result Ekström, with a gap of 26 points and 30 points yet to be awarded, has kept the title fight open, at least mathematically. “There’s no doubt in my mind that ‘Eki’ will give everything until the very end and we’ll give him all the help in the world,” said Dr. Ullrich. “Today we came very close to clinching victory. At Hockenheim we finally want to achieve it.”

With Mike Rockenfeller and Alexandre Prémat in places five and six, Audi Sport Team Phoenix scored points twice. The team based in the Eifel had the two best 2008-specification vehicles at Oschersleben.

Martin Tomczyk in his 100th DTM race scored one point with an eighth-place finish despite having lost important aerodynamics components on the rear of his Audi A4 in a tough duel with Gary Paffett as a result of which he was struggling with a lack of downforce at the rear end.

Oliver Jarvis, who finished in 13th place behind Timo Scheider, was another driver suffering from a vehicle that was damaged in a battle. The Briton was attacked by Gary Paffett on the first lap and pushed into the car of his team colleague Miguel Molina. Due to this chain reaction Molina’s race ended as early as on lap one.

A total loss was suffered by Audi Sport Team Rosberg: Markus Winkelhock hit the kerbs too hard in the fast chicane and spun into the gravel trap. After body contact with David Coulthard Katherine legge parked her A4 in the pits early because the car had become difficult to drive as a result of the damage.