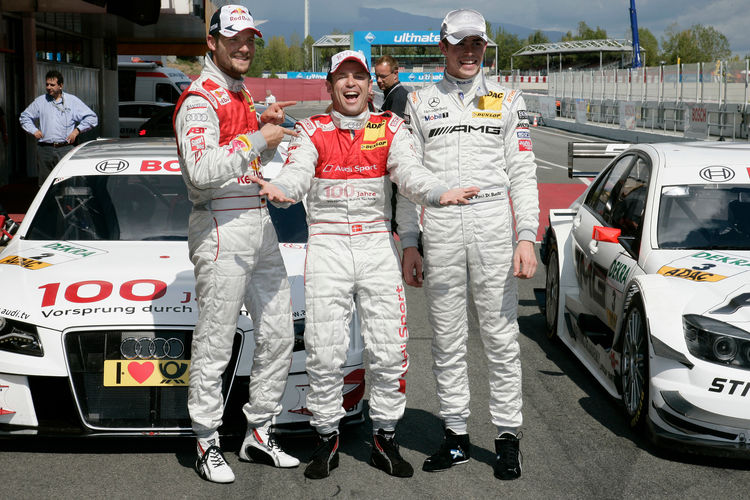 Audi increased its lead in the qualifying duel to 7:1 at Barcelona. In the eighth race of the season, the Dane Tom Kristensen clinched the seventh Audi pole position this year. With a time of 1m 06.413s the 42-year-old achieved an impressive new track record at the Circuit de Catalunya. With six A4 DTM cars on the top nine grid positions Audi has a good overall starting base for the race on Sunday (broadcast live starting at 1:45 pm German time on “das Erste”).

In a qualifying where thousandths and hundredths of a second counted, Tom Kristensen caused a sensation particularly in the third qualifying segment: His fastest time beat Bernd Schneider’s track record by an impressive 0.835 seconds. In the crucial fourth session the Dane then did not manage equaling his own best mark. Nevertheless, at 1m 06.825s, he clinched the pole position in front of Paul Di Resta (Mercedes).

“Of course I’m happy about the pole position,” said Kristensen after setting his ninth best time in his entire DTM career and his second in the 2009 season. “It shows that I’m still quick enough. My pole lap was good although I had pretty heavy understeer. Except for that, my Audi was perfect today.”

Kristensen’s team-mate Martin Tomczyk secured position three on the grid in front of Bruno Spengler. This means that one Audi and one Mercedes, respectively, are on the two front rows. The line-up immediately behind them is even more explosive: The three drivers with the best point scores – Gary Paffett, Timo Scheider and Mattias Ekström – will start to the race from positions five, six and seven.

“We’re racing in the DTM, so the competition is simply close – and today it was extremely close,” said leader of the standings Timo Scheider. “Sixth place isn’t fantastic but at least I’ve got my rivals in the fight for the title immediately surrounding me. My goal is to overtake Gary (Paffett) right at the start and then to stay in front of him.”

With Alexandre Prémat and Oliver Jarvis on positions eight and nine, Audi also put the fastest year-old cars on the grid.

“We were in front in each session today,” said Head of Audi Motorsport Dr. Wolfgang Ullrich, making a positive assessment of the day. “That Tom (Kristensen) clinched pole shows that he shouldn’t be underestimated in the DTM either. Particularly his record lap in Q3 was impressive. No other DTM car has ever run this fast at Barcelona. The best Mercedes, adjusted by the weight difference, was 1.5 tenths of a second slower – on a circuit that is merely about three kilometers long.”