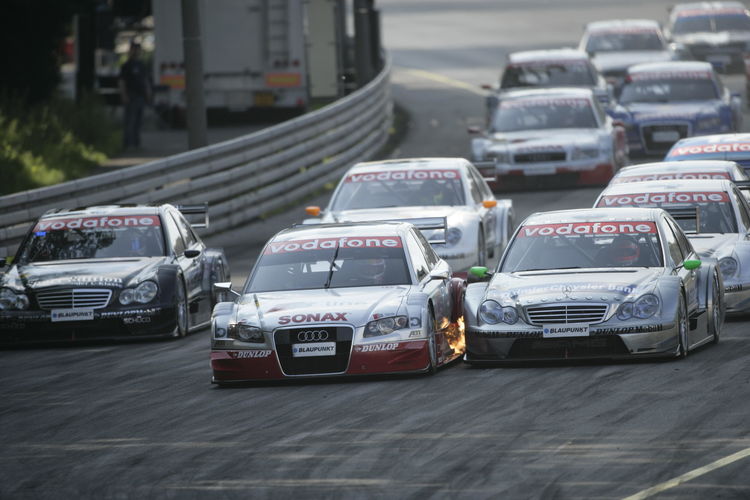 It is only just the half-way point of the DTM season and the title fight in Europe’s most popular touring car series is coming to a head. With Mattias Ekström (Sweden) and Tom Kristensen (Denmark) lying second and third in the table, the defending champions Audi have two hot-irons in the fire, who will stop at nothing in their quest to notch up Audi’s second win of the season at the seventh round at the Nürburgring on 7 August.

While Mattias Ekström wants to reclaim the lead in the Drivers’ Championship, which he lost to Gary Paffett during a turbulent race at the Norisring, his Audi Sport Team Abt Sportsline team mate Tom Kristensen aims for his first win of the DTM season. The record breaking Le Mans winner took pole position with his Audi A4 DTM twice in succession, but luck deserted him in both races.

During the three day test at Most in the Czech Republic at the end of July Kristensen concentrated on optimising the Audi A4 DTM car’s suspension geometry and damper set-up, which plays an ever increasing role in this year’s championship due to the close competition, together with the Audi engineers. Allan McNish and Martin Tomczyk, who both want to climb onto the podium for the first time this year at the Nürburgring, will both benefit from the results.

Audi Sport Team Joest also fancies their chances with last year’s cars at the Nürburgring – at least to score more points. Just how far up the field you can get in an Audi used car was proven by Christian Abt at the Norisring with his second place.

Last year, 103,000 spectators watched the DTM event at Nürburgring’s 3.629 kilometre sprint circuit, which is the “home game” for both Pierre Kaffer and Frank Stippler. The organisers expect even more spectators this time. The grandstand seats have been sold out for weeks. The ARD broadcasts Qualifying (Saturday 6 August from 2 p.m.) and the race (Sunday 7 August from 1:45 p.m.) as always live.

Quotes before the race at the Nürburgring

Mattias Ekström (Audi Sport Team Abt Sportsline #1): “I’ve always been good at the Nürburgring and really love the circuit. The only thing that’s been missing from the Nürburgring is a win. Obviously I want to change this. However, it’s incredibly close in the DTM this year and you have to find the perfect set-up to squeeze out the last hundredth of second from the car. Only then can you win.”

Martin Tomczyk (Audi Sport Team Abt Sportsline #2): “I’m really looking forward to the Nürburgring. I like the circuit and since we’ve driven there in the DTM, I have in fact always had good results. This time I want to get on the podium. I believe it should be possible.”

Tom Kristensen (Audi Sport Team Abt #5): “Norisring was disappointing for me. The Audi A4 was once again very competitive and after setting the fastest time I was hoping to win the race. I was testing at Most after Norisring, fine-tuning the car and I believe it will now be even faster over the race distance. I’m very confident and I’m always looking forward to race at the Nürburgring. For me it is the home of German motorsport where I won the German Formula 3 title many years ago.”

Allan McNish (Audi Sport Team Abt #6): “The weather plays an important role at the Nürburgring. Up till now I’ve only ever experienced the extremes: pouring rain or incredible heat, which makes things exciting because you never know what to expect at the Nürburgring, I think that the circuit should suit our A4 just as Brno and Oschersleben did. I’d like to follow on from my good results at the last races and get onto the podium for the first time in the DTM as soon as possible.”

Christian Abt (Audi Sport Team Joest Racing #14): “I’ve always been able to score excellent results at the Nürburgring – I hope that it will be the same again this year. I like the circuit. It’s demanding from both the driving and technical point of view, because you have to set the car up perfectly for the Nürburgring.”

Pierre Kaffer (Audi Sport Team Joest Racing #15): “I grew up 20 kilometres away from the Nürburgring and look forward all the more to my home race. A lot of friends and acquaintances will come. Up till now, the Nürburgring has always been a good hunting ground for me. Winning the 1000-kilometre race in the Audi R8 last year was a really fabulous experience. I don’t think a victory is possible this time around, so my goal is to score points.”

Rinaldo Capello (Audi Sport Team Joest #18): “The Nürburgring – finally a circuit that I know and on which I have always enjoyed driving. My car is, in the meantime, really good, and that’s why I was so disappointed that I made a mistake at the Norisring. In the DTM everything simply has to fall in place if you want to score points. My family are coming with me to the Nürburgring – perhaps they’ll bring me some luck.”

Frank Stippler (Audi Sport Team Joest #19): “The Nürburgring is, as it were, my home race. It doesn’t give me an advantage because the other drivers also know the circuit very well. It is, however, very pleasant to race so close to home. Lots of friends and fellow students from my time at university will be at the ring and keep their fingers crossed for me.”

Hans-Jürgen Abt (Team Director Audi Sport Team Abt Sportsline): “Although we scored points with all four cars at the Norisring and Audi took the lead in the Manufacturers’ Championship, we were not completely satisfied with the result. Everybody in the team will therefore do everything possible that we win at the Nürburgring and reclaim the lead in the Drivers’ Championship. I think that we have a good chance since we were always very strong at the Nürburgring. We have won three of the last five DTM races held there.”

Ralf Jüttner (Technical Director Audi Sport Team Joest): “It goes without saying that the Norisring race was magnificent for us. Christian Abt’s second place did the team the world of good and gave everybody an extra dose of motivation. The Nürburgring suited both the A4 and Christian perfectly last year. That’s why we’ll keep with our motto: in Qualifying not in the top ten, but to score big points in the race in return…”

Dr Wolfgang Ullrich (Head of Audi Motorsport): “We have a clear goal at the Nürburgring: We want to reclaim the lead in the Drivers’ Championship. Both our teams have prepared very well, although they had plenty of work to get the heavily damaged cars back into tip-top condition after the Norisring race. At the same time we tested with Tom Kristensen at Most. Every tenth of a second counts in the DTM – especially in the dash for the finish.”