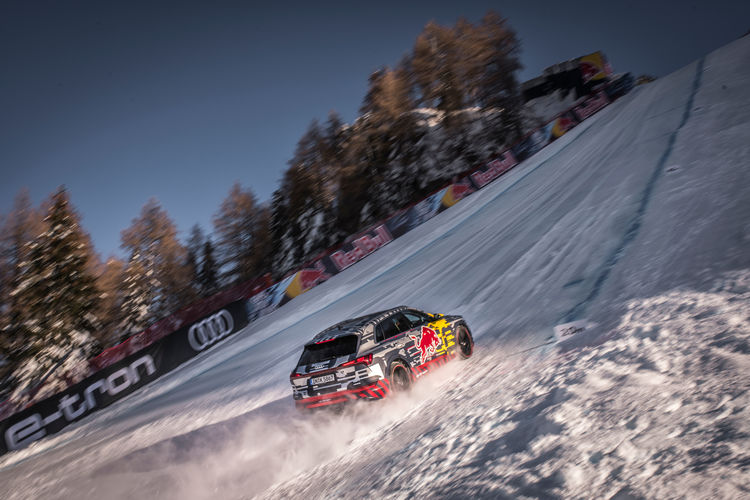 In late January, Audi sent its first fully electric-powered SUV onto the slopes where the world’s best ski racers battle for victory in the Hahnenkamm Race. The specially equipped Audi e-tron climbed the “Mausefalle” on the legendary “Streif”. With an 85 percent gradient, it is the steepest section of the spectacular downhill course.

“We already proved the mettle of the electric SUV last year in a number of Audi e-tron extreme events. From Pikes Peak to the salt plains of Namibia to the high-voltage test bay in Berlin – the Audi e-tron prototype mastered the greatest of challenges,” says Peter Oberndorfer, Head of Product and Technology Communications. “With the sensational drive up the ‘Mausefalle’ we have pushed the boundaries even further and demonstrated all the technical possibilities of quattro technology in an electric car.”

With an 85 percent gradient, the “Mausefalle” is the steepest section of the famous “Streif” downhill course in Kitzbühel. To climb this passage, the Audi e-tron technology demonstrator was equipped with a special quattro powertrain with two electric motors on the rear axle and one electric motor on the front axle. The technology demonstrator achieved a total boost output of up to 370 kW and wheel torque of 8,920 Nm (6,579.1 lb-ft). This ensured full performance on the steep gradient. Audi also modified the software with respect to drive torque and torque distribution for the special conditions on the “Streif”. 19-inch wheels with spikes developed specifically for this driving event provided the necessary grip on snow and ice.

“Conquering an 85 percent gradient sounds impossible at first,” says Mattias Ekström, who was behind the wheel of the Audi e-tron technology demonstrator. “Even I was impressed with the way this car handles such difficult terrain,” adds the World Rallycross champion and two-time DTM champion. He considers this event to be one of his most extraordinary experiences.

For the greatest possible safety, the Audi e-tron technology demonstrator was equipped with a roll cage and a racing seat with a six-point harness. The vehicle itself was equipped with a belay, through which a safety cable was run. There was no pulling device.

Audi had a strong partner at its side for this project: the Austrian beverage producer Red Bull. The two companies are long-standing partners of the Hahnenkamm Race and conducted this event together. The Audi e-tron technology demonstrator also illustrated this collaboration with a special set of decals.

The video clip from the event is available here.

For download of photo and video material please visit the Audi MediaCenter.