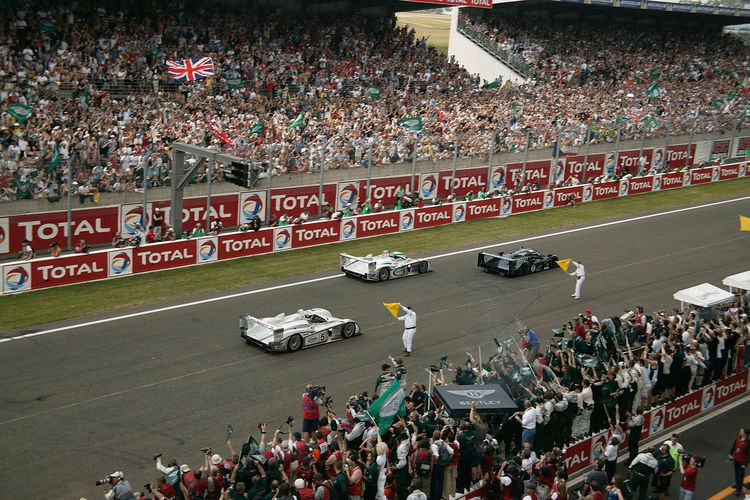 The balance of Audi at the famous Le Mans 24 Hour race remains unique: Following three consecutive victories of the Audi factory team in the years 2000, 2001 and 2002, an Audi customer team repeated the result, that Audi had achieved in 1999 on their Le Mans debut. Finishing third with the Audi R8 of Team ADT Champion Racing, Stefan Johansson, JJ Lehto and Emanuele Pirro made it the fifth time in a row that Audi drivers have stood on the podium at Le Mans. The R8 of Audi Sport Japan Team Goh finished fourth. The R8 of Audi Sport UK ran out of fuel and retired already in the early stages of the race.

The race at a glance

Emanuele Pirro (Team ADT Champion Racing Audi R8 #6): “It’s an amazing feeling to be on the winners’ rostrum for a fifth consecutive year here at Le Mans. We did the best job possible in the circumstances and for a privateer team to climb on to the podium here is an incredible achievement.”

Marco Werner (Audi Sport Japan Team Goh Audi R8 #5): “We were fast but did not have the necessary luck. After finishing third last year, of course I would have liked to step on the podium again. But a third and a fourth place in my first two Le Mans races are still quite an achievement.”

Frank Biela (Audi Sport UK Audi R8 #10): “I am just so upset for the team. I found myself baulked by another car beside me and I couldn’t turn into the pit-lane which meant I had to start another lap. I knew immediately that I would not have enough fuel to do so. When the engine died, I tried to get back to the pits using the starter but it was impossible.”

Dr Wolfgang Ullrich (Head of Audi Sport): “The Audi customer teams have done a great job and proven how good the Audi R8 is as a year old ‘used car’. You should not forget the basic concept of the R8 is now four years old. Bentley has developed a completely new car for this year’s race and has earned the victory. The early retirement of Audi Sport UK was a shame. But it proves once more how difficult it is to win Le Mans. Even the smallest mistake can upset your plans.“