Audi drivers agree: “Hockenheim will be a close battle” 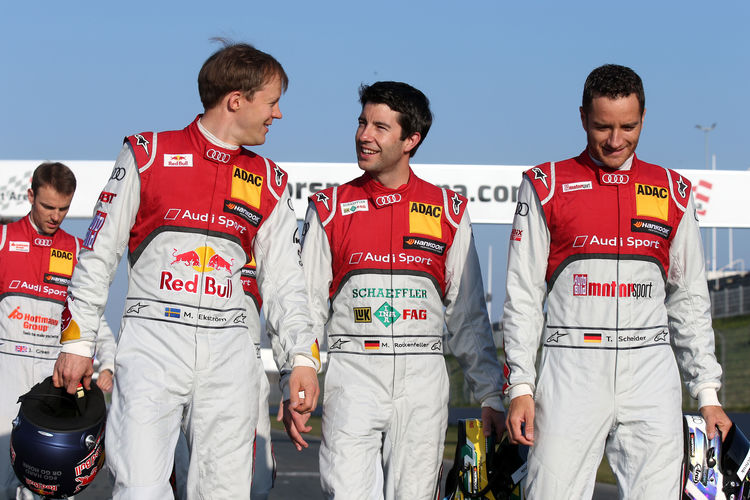 Before the DTM season opener at Hockenheim next weekend, the three DTM Champions from the Audi squad wouldn’t venture a prediction for the race.

“I think it’s going to be a really close battle,” said Mike Rockenfeller, the 2013 DTM Champion at an Audi telephone conference on Wednesday. “Anyone can be in front.”

Mattias Ekström, the 2004 and 2007 DTM Champion, shares Rockenfeller’s opinion. “My guess is it’s going to be even closer than last year,” says the Swede. “Everyone worked hard last winter. But with just 20 minutes of qualifying, the car’s performance won’t be the thing that counts 100 percent. There’ll be a lot of other factors. I’m expecting all three manufacturers to be in the top six in qualifying.”

“All of us are eagerly awaiting the first qualifying on Saturday,” says Timo Scheider, the 2008 and 2009 DTM Champion. “Everyone’s simmering with excitement to see how the strengths will really be panning out between the manufacturers. With 24 cars in the field, the DTM is as strong as never before. I expect 15 drivers to be in contention for victory.”

The three Audi stars prepared for the DTM Festival in very different ways. Mike Rockenfeller spent a week with his family in Majorca and combined his vacation with daily training on his bike. Mattias Ekström contested the season opener of the FIA World Rallycross Championship in Portugal and will have a double commitment next weekend. His privateer rallycross team, EKS RX, will be racing at Hockenheim as part of the supporting program. “I’m inviting everyone to an open house hosted by our team on Thursday night,” he says. “From Friday on, I’m going to concentrate on the DTM 100 percent. But for the fans it’s great to be able to witness the World Rallycross Championship as part of the DTM program.”

Timo Scheider celebrated his debut as team boss in the new ADAC Formula 4 last weekend but can hardly wait to be taking the wheel of his Audi RS 5 DTM again. He welcomes the fact that Audi Sport is making more extensive use of social networks in communications this year: “We’ve got to keep up with the times. It speaks for the DTM and for Audi that we’re doing this.”

Audi Sport will be offering fans and media live interviews with the drivers on the new social media platform ‘Periscope’ for the first time at a DTM race next weekend. “I had the chance to try this during the winter tests and think it’s a great new opportunity,” says Scheider.

The Audi factory driver refused to reveal any details about his wedding plans. “It’s planned to happen before the year is out. But, between Formula 4 and DTM, we haven’t been able to find a suitable date yet …”