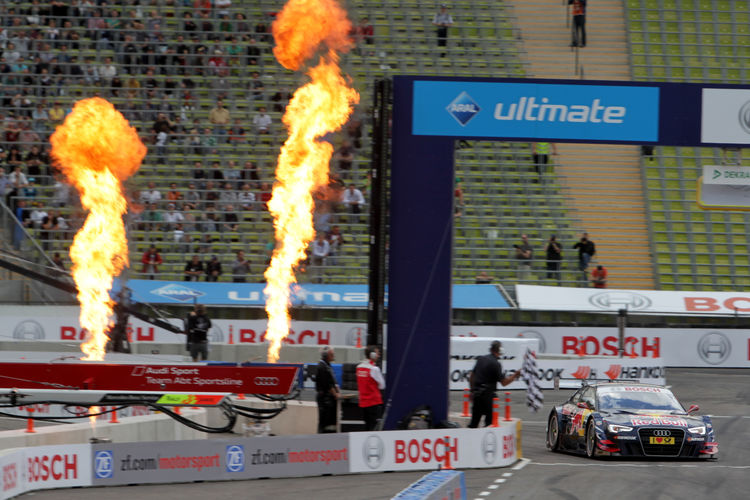 The winner of the single competition at the 2012 DTM show event in Munich is Mattias Ekström (Audi Sport Team Abt Sportsline). In front of 45,000 spectators (throughout the weekend) the Audi factory driver at the wheel of his Red Bull Audi A5 DTM prevailed in a spectacular finale against Jamie Green in the Mercedes-Benz.

With three triumphs at the “Race of Champions” under his belt, Mattias Ekström proved his outstanding class in stadium competitions several times before. Now, he has entered his name in the winners’ list at the Munich Olympic Stadium as well. One day after his 34th birthday, the Swede gave himself the best belated birthday present by clinching his first victory this season.

“It’s been a long time since I last stood on the very top of the podium,” said the Audi racer after his triumph. “Winning here in front of so many fans is particularly nice. I had the impression that the Olympic Stadium was pretty much in BMW’s hands – but today we showed to the whole crowd that Audi’s best.”

As the best-placed Audi driver in the DTM standings, Mattias Ekström had been placed for the eighth-final on Sunday in which he easily defeated BMW racer Joey Hand. In the quarter-final, Ekström took another BMW out of the race, the car driven by the current DTM Champion Martin Tomczyk. That his advantage of 0.090 seconds turned out to be extremely narrow was due to the fact that prior to the pit stop Ekström had accidentally shifted into idle on the track that had meanwhile become wet from rain, which caused him to lose nearly his whole advantage.

A clear decision was made in the semi-final in which the Audi driver on six laps snatched almost two seconds from the leader of the standings, Gary Paffett (Mercedes). And the two-time DTM Champion did the best job of handling the flooded track in the finale as well. After a slow first pit stop he made up a gap of nearly two seconds in the second of the two final heats within just three laps and ultimately crossed the finish line as the clear winner with a 1.476-second advantage.

“It was a very thrilling finale and a nice event that was good fun,” commented Head of Audi Motorsport Dr. Wolfgang Ullrich. “Even spectators who weren’t into motorsport very much before were able to see how exciting and captivating the DTM can be. In the end, it was especially nice that Mattias (Ekström) managed to win for Audi.”

Edoardo Mortara (Playboy Audi A5 DTM/Audi Sport Team Rosberg) experienced an even closer outcome. In the eighth-final, last year’s runner-up had to admit defeat to former Formula One racer David Coulthard by as little as 0.062 seconds. His team-mate Filipe Albuquerque (TV Movie Audi A5 DTM) lost by a similarly narrow margin against Jamie Green. One of the most nail-biting eighth-final heats was delivered by Adrien Tambay (Audi ultra A5 DTM), who, running on slicks as rain was setting in, defeated Bruno Spengler by a razor-thin lead.

With a commanding victory in the preliminary round against BMW racer Dirk Werner, Rahel Frey (E-POSTBRIEF Audi A5 DTM) managed to advance into the eighth-final as well. The gamble of competing against Gary Paffett with rain tires fitted to the front wheels, though, did not work out. In 15th place, the Swiss was the best lady in the field in the end nonetheless.

The two-time DTM Champion Timo Scheider (AUTO TEST Audi A5 DTM) paid the price for no longer having fresh tires at his disposal for the day of the race after moving into the final on Saturday. In the first heat, he was defeated by the Canadian Robert Wickens.

After a brief break, the DTM will be seeing a battle for points again at the Nürburgring on August 19 where Mattias Ekström was victorious last year as well.