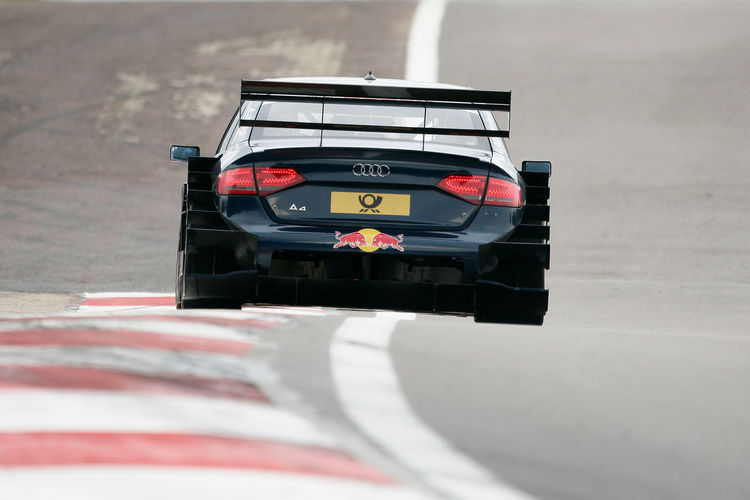 If the starting grid at the DTM debut at Dijon-Prenois/France (Sunday starting at 1:45 pm – German time – live on “Das Erste”) already were the race result, Audi fans would have a double reason to rejoice: They could celebrate the early title win of AUDI AG in the DTM but would still experience a shoot-out between the two Audi drivers Timo Scheider (Germany) and Mattias Ekström (Sweden) at the final round at Hockenheim on October 25.

On Saturday, only one of the four title candidates made it into the fourth segment of qualifying (Q4): Mattias Ekström. The 2004 and 2007 DTM Champion secured position four on the grid and thus has good chances of postponing the decision in the drivers’ classification to the last race. For leader of the standings Timo Scheider on the other hand, qualifying surprisingly ended as early as in Q1 after a tire gamble which will see him start to the race on Sunday from an unusual 16th place on the grid. Small consolation for the title defender: Gary Paffett, the only Mercedes drivers with title chances, in position eight only achieved a fair to middling result as well. The Briton now has to at least finish in fifth place at Dijon in order to remain in the title race.

The conditions during qualifying could hardly have been more difficult: In each of the four sections it was raining – with varying degrees of intensity. Scheider and his race engineers reduced the camber settings on the suspension in view of the threatening rain and completed the second half of Q1 with a set of used slicks. “We had decided within seconds which tires we should chose. We decided not to change and thus had the wrong tires on the car at the wrong time,” commented Scheider after dropping to 16th place and thus failing in Q1. “Of course position 16 on the grid is a bitter pill and disappointing – particularly now. But the race tomorrow is long. I’ll try and make the best of the situation. We know that we’ve got a fast car and what the problem was today.”

In Q2 Martin Tomzcyk failed as another one of the four remaining hopefuls for the title. The Bavarian slipped on the final lap as the rain was getting heavier and had to settle for grid position nine.

In Q3 Tom Kristensen and Mattias Ekström opted for slicks despite the rain and this decision proved to be exactly right: Kristensen displayed his routine in the extremely difficult conditions and set the fastest time, while Ekström, in third place, also managed the leap into the shoot-out for the top four grid positions.

Subsequently, in Q4, rain tires were the appropriate choice on which the two Audi drivers, however, had no chance of clinching the front row of the grid. “The fact that we’re not quite as strong here in mixed conditions on wets as we are on slicks doesn’t really surprise me,” said Head of Audi Motorsport Dr. Wolfgang Ullrich. “And on the whole of course I’m not satisfied either. I’m sure that we would have clinched better grid positions in clearer conditions. But the weather was the same for everybody.”

With Tom Kristensen and Mattias Ekström spearheading the squad on positions three and four, this will be the first race this year at which no Audi driver is starting from the front row. In total, only four Audi A4 DTM cars made it into the top ten. The fastest driver of a year-old A4 was Oliver Jarvis in tenth place.