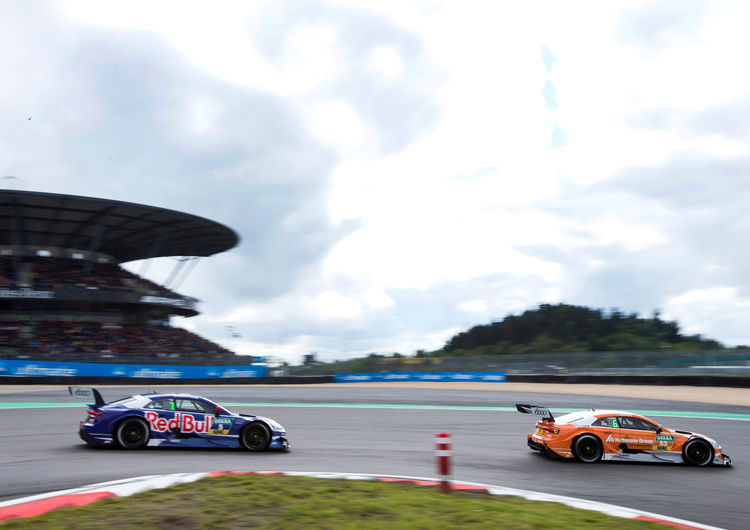 With a hard-fought sixth place in Sunday’s race at the Nürburgring Audi driver Mattias Ekström has maintained his lead in the DTM and extended his advantage over Lucas Auer (Mercedes-Benz) to nine points.

Following the previous wet day, the Audi drivers on Sunday were battling with dull weapons on a dry track, as expected. Jamie Green (Audi Sport Team Rosberg) as the best Audi driver qualified for grid position eleven. Leader of the standings Mattias Ekström (Audi Sport Team Abt Sportsline) entered the race from position 13. All other Audi campaigners found themselves at the rear of the grid.

Mattias Ekström and Jamie Green made the best of their difficult starting positions. Both pitted late in a race with turbulent phases and on fresh tires in the final stage still battled their way forwards from positions ten and eleven to six and seven. With that, both scored valuable points in the title race which, before the last two race weekends at Spielberg and Hockenheim, has now become even more intense.

“My race was relatively boring,” said Mattias Ekström. “I was driving alone for much of the time. In the end, following all the pit stops, I came sixth – that makes for good points, but not for a good feeling.”

Head of Audi Motorsport Dieter Gass assessed the race in a similar vein: “This wasn’t a really good race for us. We weren’t fast enough and were struggling with tire degradation, which is normally not an issue for us, and was probably due to the high weight. Considering this, we have to be fairly happy with positions six and seven for Mattias and Jamie.”

Ekström and Green were the only two Audi drivers to score points on Sunday. Following his third caution this season, René Rast had to start from the last position on the grid and lost about ten seconds due to a problem during the tire change. The German still fought back to position twelve and continues to be ranked in third place overall.

For Audi Sport Team Phoenix, which remained without points on both days in the Eifel, the event on home soil was disappointing. Loïc Duval came 15th on Sunday and Zandvoort winner Mike Rockenfeller 17th following two tire changes.

Nico Müller had to park his Audi RS 5 DTM early, eleven rounds before the finish, after BMW’s Timo Glock had hit the rear of Müller’s car hard on braking into the chicane.

The DTM continues in just 14 days’ time at the Red Bull Ring in Spielberg. Mattias Ekström is traveling to Austria as the leader of the standings. René Rast, Jamie Green and Mike Rockenfeller are in positions three, five and six. In the manufacturers’ classification, Audi, now with a 52-point advantage over Mercedes-Benz, continues to hold the top spot. In the teams’ classification, Audi Sport Team Rosberg is leading 52 points in front of Audi Sport Team Abt Sportsline.