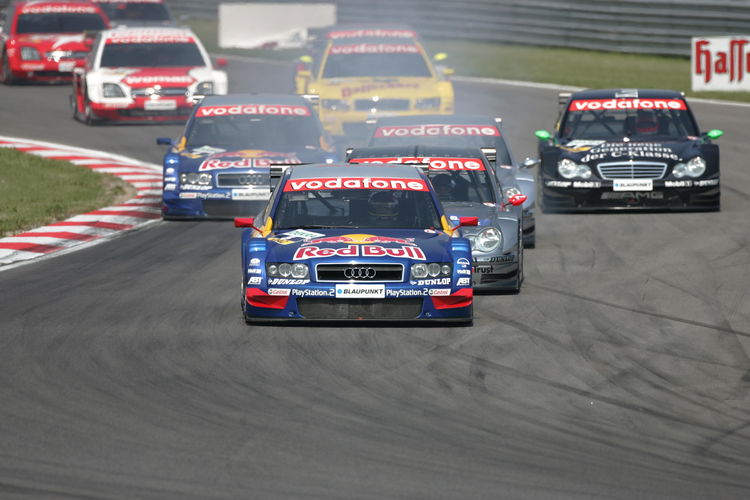 The new Audi A4 DTM celebrated its first victory as early as the third race of the season in the middle of May. Now, Audi aims to take the championship lead of Europe’s most popular touring car series at the EuroSpeedway Lausitz. Audi works driver Mattias Ekström travels to the east of Germany a mere two points behind leader Christijan Albers. A glance at the statistics proves that the 25-year old shooting star can fancy his chances at the fourth race of the season: The Swede has driven three races at the EuroSpeedway, and each time he finished on the podium. The Audi driver has also finished in the top three at every race so far this season. He started the last two races from the pole position.

However, not only does Ekström aim for a top result: Since his Audi colleagues Christian Abt, Frank Biela, Tom Kristensen, Emanuele Pirro and Martin Tomczyk were exceptionally unlucky during the race at Adria they are especially motivated. Up till now Tomczyk has scored points in every race and is currently the best placed German driver in the DTM.

Mattias Ekström (Audi Sport Team Abt / Audi A4 DTM #5): “The signs are good: I’ve caught another cold, as every year before the race at the EuroSpeedway. Up to now, I’ve been either second or third in every race at this race track. In the meantime I’ve got to know these podium positions very well and would actually quite like to check out the other one...”

Martin Tomczyk (Audi Sport Team Abt / Audi A4 DTM #6): “The EuroSpeedway is a new track for our Audi A4, but I’m sure that we will keep up with the opposition. The quick corners should really suit our car and, for the straights, we’ll have to find a good compromise with the set-up. We managed this exceptionally well in the past with the TT-R.”

Christian Abt (Audi Sport Team Abt Sportsline / Audi A4 DTM #11): “Because of the long straights, the EuroSpeedway isn’t exactly my favourite circuit. However, our A4 is particularly strong over the distance. Whatever happens I want to have a trouble free race and score points. To achieve this, a good grid position is absolutely necessary in the DTM, that’s why I’ll be concentrating on finding the perfect qualifying set-up in all practice sessions.”

Tom Kristensen (Audi Sport Team Abt Sportsline / Audi A4 DTM #12): “The EuroSpeedway is exactly the same as Hockenheim and Adria for me; a completely new circuit. In the meantime however I have collected quite a bit of experience with the A4 and, with the help of my team and team colleagues I’ll definitely be up to speed very quickly. I’m looking forward to the modern circuit, and hopefully the many fans on the massive main grandstand.”

Emanuele Pirro (Audi Sport Infineon Team Joest / Audi A4 DTM #44): “Although the EuroSpeedway is again a track that I only know from television, I am very confident. I simply feel more and more comfortable in the A4 DTM, and my race speed is already good. However, all at Team Joest must certainly improve in qualifying.”

Frank Biela (Audi Sport Infineon Team Joest / Audi A4 DTM #45): “Two tough weeks start for me at the EuroSpeedway, because immediately after the DTM race I travel to Le Mans. I’m looking forward to getting to know another new track. Adria was also new for me, and things went very well in practice there. My goal in qualifying is to reach the Top Ten again. And, after having had bad luck three times in a row, its time the pendulum swings the other way in the race.”

Hans-Jürgen Abt (Team Director Audi Sport Team Abt Sportsline): “In today’s DTM it is almost impossible to predict which circuit suits which car. The first three races of the season have also clearly demonstrated this. We had the strongest package at Adria, and we will bring this with us to the EuroSpeedway. I can only recommend to all the fans that they don’t miss this race.”

Ralf Jüttner (Technical Director Audi Sport Infineon Team Joest): “Our goal for the EuroSpeedway is clear: We want to have a trouble free race and score as many points as possible with both cars. Frank qualified for Super Pole for the first time at Adria; Emanuele was very strong in the race. We now have to turn the upward trend in to results.”

Dr Wolfgang Ullrich (Head of Audi Motorsport): “Since Adria we know that the Audi A4 DTM is a race winner if everything functions perfectly. With Mattias Ekström this was exactly the case at Adria, with our other drivers unfortunately not. We have analysed the reasons, and want the team to be as strong as it was at Hockenheim and Estoril.”