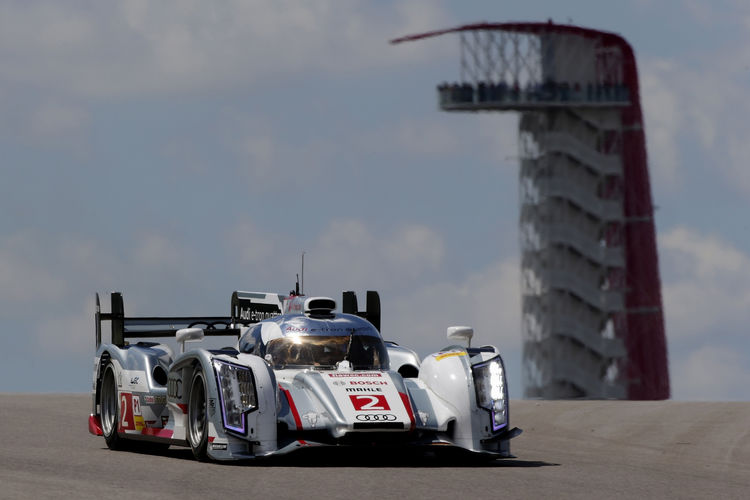 Audi has taken the front positions yet again. On the debut of the FIA World Endurance Championship (WEC) at the “Circuit of the Americas” at Austin, Texas, both Audi R18 e-tron quattro cars of Audi Sport Team Joest captured the front row in the final qualifying session. Thus, an Audi has started from the top spot ever since the second WEC race at Spa.
Download PDF (160 KB)
Facebook
Twitter
LinkedIn
WhatsApp

Audi has taken the front positions yet again. On the debut of the FIA World Endurance Championship (WEC) at the “Circuit of the Americas” at Austin, Texas, both Audi R18 e-tron quattro cars of Audi Sport Team Joest captured the front row in the final qualifying session. Thus, an Audi has started from the top spot ever since the second WEC race at Spa.

The leaders of the standings presented themselves in superb form. Loïc Duval (F) in car number ‘2’ was the only driver to complete a lap in less than 1m 48s – and not just once but twice. On his second and third flying lap, posting 1m 47.801s and 1m 47.520s, respectively, he even significantly stayed below this mark. Allan McNish (GB) shared the cockpit in qualifying with the Frenchman and completed the team’s performance. The two team-mates achieved 1m 48.355s as their average time of the four best laps. With that, the Championship leaders secured a point in the standings as well.

The sister car, designated as number ‘1’ and driven by Marcel Fässler (CH) and André Lotterer (D), had to admit defeat by 0.262 seconds. On the 5.514-kilometer track, the duo achieved an average time of 1m 48.617s. Third place was clinched by challenger Toyota.

After a rainy day of practice on Friday and overcast skies in Saturday morning’s free practice, the sun came out above the Texan circuit in the qualifying session for the first time. Air temperatures of 26 and track temperatures of 37 degrees centigrade provided an initial foretaste of the conditions in the 6-hour race on Sunday.

The fifth of eight World Championship rounds starts on Sunday at 11:00, local time (18:00 German time). The race can be watched on the internet by live streaming on www.audi-motorsport.com and on www.fiawec.com. In Germany, Eurosport will start to broadcast on Sunday, starting at 22:26 and will air a summary on Tuesday, starting at 22:30.

Dr. Wolfgang Ullrich (Head of Audi Motorsport): “It’s great that we’re doing well on this track that’s new for us and that both cars are on the front row. But Sunday is the crucial day, as a good race result is what ultimately counts. But I think that we’ve been able to prepare ourselves well in the test sessions.”

Chris Reinke (Head of LMP): “From our point of view, we started the weekend in a commanding and positive way. Like all the competitors, we had a bit of misfortune yesterday with the weather conditions. That’s why today it was important to find the right rhythm again. Today, we’ve seen a good performance but we’ve also got to admit that our competitor suffered a bit of misfortune – which, obviously, we’re not wishing for anyone.”

Ralf Jüttner (Technical Director Audi Sport Team Joest): “This is a pretty clear result because, on average, the gap was two and a half tenths of a second. The foundation today was laid by the drivers who initially took the wheel. Loïc Duval was incredibly fast although he’d made a mistake on his first lap. That’s why his second and third laps were even more exceptional. Marcel Fässler was having a bit of a hard time today. Allan McNish and André Lotterer then took over the cars and both drove two very good laps, but the difference between the lap averages was already too large. It’s positive that all the drivers are feeling very comfortable on the track.”

Loïc Duval (Audi R18 e-tron quattro #2): “I immediately felt comfortable on this track. Now we’re on the pole position although that’s not so crucial for a 6-hour race. But we scored a point in the Championship. Now we’ve got some more work to do for Sunday.”

Tom Kristensen (Audi R18 e-tron quattro #2): “That was a very efficient job and a good team performance of the entire squad. Our car is very fast. Loïc and Allan showed a fantastic pace in qualifying. Now we’ve scored another important point. On Sunday, a hot and strenuous race in high humidity is awaiting us.”

Allan McNish (Audi R18 e-tron quattro #2): “Audi is on the front row again with both cars. I’m happy that we’re on pole after just barely missing it in Brazil. Compared with the competition we were good in the rain, and now we were on a dry track as well. As our sister car is battling for the title too, attack was clearly the best form of defense in qualifying today.”

Marcel Fässler (Audi R18 e-tron quattro #1): “I didn’t do a very good job on my first three flying laps. I kept making small mistakes. Only on my fourth lap I was able to set my best personal time. That was a little too late. I was lacking a second good lap time to achieve a good average.”

André Lotterer (Audi R18 e-tron quattro #1): “I gave everything and managed two brilliant laps. Unfortunately, it wasn’t enough for the top spot on the grid. The others were a bit better and scored another point. Still, we’ve got a good starting base for the race. Our Audi feels good.”

Benoît Tréluyer (Audi R18 e-tron quattro #1): “That wasn’t an easy qualifying session but Audi showed outstanding performances with both cars. Loïc Duval was very fast on new tires and made no mistakes. But my two team-mates battled for the pole position as well. It was fun to watch this nice duel.”