Audi at Nürburgring 24 Hours on front row of the grid 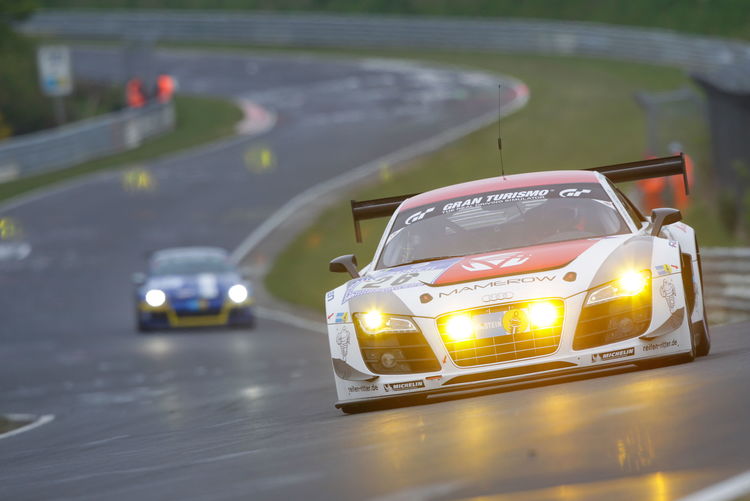 Audi is starting to the Nürburgring 24 Hours from the front row. In Friday’s top 40 qualifying, Christian Mamerow in the Audi R8 LMS ultra took position two on the grid. At the 40th running of the Eifel classic, five Audi R8 LMS ultra qualified for the seven front rows.

As early as on lap one of the top 40 qualifying session Christian Mamerow managed to set a lap time of 8m 19.700s which initially made him the front runner. In the only other timed lap that was permitted Uwe Alzen was the only driver to be quicker once more than the Audi racer. Team Mamerow Racing achieved this remarkable performance in its debut season with the new Audi R8 LMS ultra – Team Director Peter Mamerow had only taken over the GT3 sports car in March. This result marked an especially pleasing outcome of the qualifying event for Audi – particularly since the work of all five Audi teams was not centered on chasing for a single fast time but on thorough and comprehensive preparation for the race.

The second-best Audi driver in the final qualifying session was Frank Stippler. At the wheel of the Audi R8 LMS ultra of Audi Sport Team Phoenix he managed to set the eighth-best time on the 25.378-kilometer Eifel roller-coaster. Three other Audi drivers – Edward Sandström (Speedhunters Team WRT), Marc Basseng (Audi Sport Team Phoenix) and Thomas Mutsch (Raeder Motorsport) – achieved positions eleven to 13. The Audi race experience is starting into the race from rows 13 and 14.

Qualifying marked the conclusion of a very thorough preparation phase of the Audi squads for the Nürburgring 24 Hours. Audi Sport Team Phoenix just like the teams supported by Audi Sport customer racing, Audi race experience, Mamerow Racing, Raeder Motorsport and Speedhunters Team WRT, used the free practice and the first two qualifying sessions to optimally set up the seven Audi R8 LMS ultra cars for the 24-hour racing distance. The work was centered on programs for the suspension set-up, aerodynamics, fuel consumption and the Michelin tires. Until Friday afternoon all cars were converted to the component specifications for the race.

Germany’s biggest race will start at 16:00 on Saturday. From 15:30 on, www.audi.tv will broadcast the entire competition up to the finish by live streaming.

Dieter Gass (Head of Racing Commitments Audi Sport): “I think we can be highly satisfied with qualifying. We showed a pretty cohesive performance with all cars. Qualifying in the new format that immediately proved to be viable was a tremendous thriller. Last but not least, there were no weather changes, which made a spectacular qualifying event possible. We’re basically in a very good position. My congratulations go to Team Mamerow for position two. The squad spent a hard night’s work to put the car on the grid here and did a perfect job. We’re lined up very well with all Audi R8 LMS ultra cars for tomorrow’s race.”

Christian Mamerow, Audi R8 LMS ultra #26 (Mamerow Racing), grid position 2:
“I’m pleased. A superb qualifying session, as everybody had the chance to drive a free lap. Up to the end of the second lap the track was clear for me and then I caught two Porsches. But it was clear to me right away that the first lap would be it, because the tire had the best grip then. I was astonished how many corners I was able to take without any obstructions in this qualification mode. The track conditions were perfect and the squad did a really good job. I felt comfortable – and that’s how a good time resulted.”

Frank Stippler, Audi R8 LMS ultra #2 (Audi Sport Team Phoenix), grid position 8:
“We’re starting from the fourth row and definitely not unhappy with that. Top 40 qualifying stands for a new mode. Obviously, this is also about catching a free lap. We had the choice between being overtaking on the warm-up lap and then getting stuck in traffic on the timed lap or attacking on the formation lap. We decided to attack.”

Edward Sandström, Audi R8 LMS ultra #4 (Speedhunters Team WRT), grid position 11:
“In Q3 I managed an average lap and I’m a bit disappointed. But this endurance race is about something totally different than a grid position. My team did a good job and I’m hoping that this will pay off for us in the race.”

Marc Basseng, Audi R8 LMS ultra #3 (Audi Sport Team Phoenix), grid position 12:
“Top 40 qualifying is a sensational idea. It was a real thriller. I tackled the formation lap with a lot of caution in order to keep from running down the tires. On lap one I was trying to find a good speed, and I managed to do that. I wanted to improve some more for the second lap but had to overtake a car, which cost some time. That’s why the second lap was as fast as the first one. But the position is a good starting base for the 24 hours.”

Thomas Mutsch, Audi R8 LMS ultra #9 (Raeder Motorsport), grid position 13:
“A big thank you goes to the team. The mechanics had a long night and gave me a very good car. Although we didn’t quite make it into one of the top positions we’re pretty pleased. The new top 40 qualifying format is a brilliant idea, as the new mode does away with the chaos that we used to have at the beginning of the qualifying sessions. We set up the car for the race so that we’ll manage to handle the distance well in any kind of conditions. We attached importance to a good-natured set-up and for the race didn’t just focus on the lap time.”

Marco Werner, Audi R8 LMS ultra #25 (Audi race experience), grid position 25:
“For the first time ever, I had two free laps on the Nordschleife ... They were good laps with just a few minor mistakes. I’m pleased. We want to drive the race without any problems throughout. The front of the field will probably be close together. I’m starting for the Audi race experience together with three customers. Our aim is to keep from making any mistakes and to do a good job of driving throughout.”

Florian Gruber, Audi R8 LMS ultra #24 (Audi race experience), grid position 28:
“I’m quite pleased with my lap. It’s really important, though, to put the results in the right perspective. Obviously, it’s not qualifying that counts this weekend but the long race. It’s positive that our car was running really well right from the beginning.”