Audi A4 DTM strong at Norisring as well 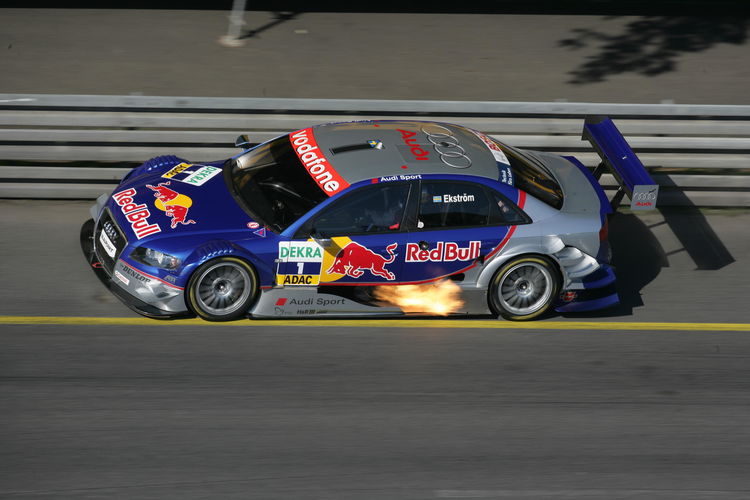 By clocking the third-best time on Friday, the defending DTM Champion, Mattias Ekström, has shown that the Audi A4 DTM has good chances for victory in its “home game” at Nuremberg’s Norisring as well. In blazing heat with temperatures of up to 33 degrees in the shade, the Swede from Audi Sport Team Abt Sportsline was leading the field for a long time until being relegated to third place shortly before the end. Ultimately, the leader of the standings was lacking merely 0.018 seconds vis-à-vis the day’s best time.

The entire field on Friday was within a mere seven tenths of a second. Tom Kristensen, who finished in tenth place, was only three tenths behind Ekström. The fact that the 2004-spec A4 DTM entered by Audi Sport Team Joest is a serious contender at the Norisring as well was suggested by Pierre Kaffer’s result: the young German clocked the seventh-best time as the quickest driver of a car from last year.

The qualifying at the Norisring will not be held until Saturday evening. ARD will broadcast the qualifying, Super pole and subsequent “Race of Legends”, in which former Formula 1 and World Motorcycle Champions will be competing against each other with DTM cars, starting at 6.10 p.m. (local time).

Mattias Ekström (Audi Sport Team Abt Sportsline #1)
8th place / 3rd place, 49.143s
“This morning, we had some difficulties finding the optimum set-up for this hot weather. But as the track was gradually developing grip, we were able to complete our programme as planned. Considering the fact that the Norisring had not exactly been the circuit where we shone in recent years, it now looks as though we could be among the front runners with our Audi A4.”

Pierre Kaffer (Audi Sport Team Joest Racing #15)
13th place / 7th place, 49.364s
“Again and again, I’m enthralled by the Norisring and am really looking forward to the home race of the Audi family. I’m very satisfied with the way the day went, we were able to try out a lot of different things. I had not expected to be this far at the front, because we were lacking a bit of top speed on the straight at Spa. Today’s result is respectable.”

Tom Kristensen (Audi Sport Team Abt #5)
6th place / 10th place, 49.456s
“Today certainly wasn’t the best Friday we’ve had this year. But at least we’ve sorted a few things we will not use in the race. Towards the end of the second test session this afternoon, we had to do some more work on my A4, that’s why I wasn’t able to drive a fast lap any more on new tyres. I’m sure that we’ll be better tomorrow.”

Martin Tomczyk (Audi Sport Team Abt Sportsline #2)
19th place / 12th place, 49.467s
“For me, this Friday was ‘mixed’, which is nothing new to me at the Norisring. But I did make some progress as early as today: my A4 responded to the changes exactly the way we’d wanted it to and thought it would – and that’s a very important step. Now we’ll try and find some improvements by tomorrow, and then I want to be among the top ten.”

Christian Abt (Audi Sport Team Joest Racing #14)
11th place / 15th place, 49.531s
“We were afraid that things wouldn’t be easy here with our 2004-spec cars, and indeed they aren’t. It’s a question of three tenths. But if Sunday should be as hot as today, I think that grid positions won’t matter all that much anyway. In such conditions what counts more than anything else is that the drivers and the cars manage to finish the 72 laps.”

Frank Stippler (Audi Sport Team Joest #19)
16th place / 18th place, 49.737s
“As expected, I’m having difficulties at the Norisring. Now it’s time to grit my teeth. My main problem is that I can’t put the advantage of new tyres to good use. I simply don’t feel any higher level of grip. This raises a few questions we need to answer.”

Rinaldo Capello (Audi Sport Team Joest #18)
18th place / 19th place, 49.827s
“I’m still losing too much time while braking. The car is too nervous then. I hope we’ll be able to solve this problem. What makes me feel optimistic is the time clocked by Pierre. This shows that even here you can be quick with a car from last year if everything is right.”

Allan McNish (Audi Sport Team Abt #6)
20th place / 20th place, 49.828s
“Even though the Norisring with its four corners looks simple, my debut turns out to be more difficult than I thought. There are so many unusual lines here, which you have to drive in order to be quicker by the crucial hundredths. I think I need a little more driving practice to get used to this.”

Ralf Jüttner (Technical Director Audi Sport Team Joest): “As usual at the Norisring, we are faced with the balancing act between downforce and top speed. We have tried several solutions. Both work in a certain way. We have collected lots of data, which we’re now going to analyse, trying to come up with the right decision for tomorrow. If things go well, we can sort ourselves somewhere in mid-field.”

Hans-Jürgen Abt (Team Director Audi Sport Team Abt Sportsline): “Today, the high temperatures probably played a major role. As we usually do on Friday, we tested all the eventualities and are well prepared. One of our cars was at the front, but some cars were further behind. This shows yet again that even the smallest mistakes are punished severely here at the Norisring. If you look at how close the very front of the field is you know what it means to be a front runner at the Norisring.”

Dr Wolfgang Ullrich (Head of Audi Motorsport): “As always, this circuit, which appears to be very easy at first glance, makes very high demands on a car’s set-up. Today, we tried out a wide variety of set-ups. I think that in the end we found a pretty good solution. We’ll try to translate this into action in the qualifying session and the race.”