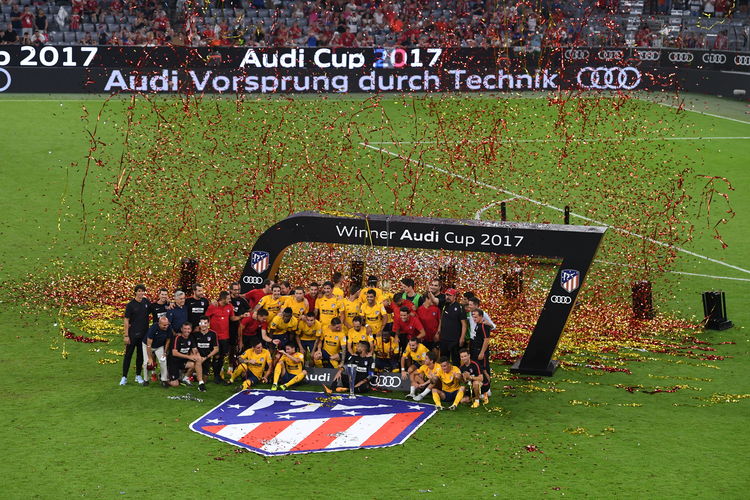 Tournament debutants and first time winners: Atlético de Madrid beat Liverpool FC 6:5 after a penalty shoot out in the final of this years Audi Cup in the Allianz Arena. In the third place play off, SSC Napoli beat FC Bayern München 2:0.

With leading clubs from the four big European leagues, the Audi Cup 2017 has rarely seen such a star-studded line-up. In addition to hosts FC Bayern München, which has participated in all five editions so far since the premiere in 2009, Atlético de Madrid from Spain, Liverpool FC from England and SSC Napoli from Italy all made their debuts. The 123,000 fans enjoyed exciting football and goals galore on both days.

Liverpool FC and Atlético de Madrid qualified for the final thanks to a 3:0 win against FC Bayern München and 2:1 respectively against SSC Napoli. In a well matched duel the Spanish capital club took the lead through Keidi Bare (33rd minute). In the second half, the English club, trained by German Jürgen Klopp, equalized through a penalty taken by Roberto Firmino (83). In the penalty shoot out, Madrid proved with 5:4 the more confident team and was delighted to become the second Spanish team to win the Audi Cup after FC Barcelona in 2011. In the previous third place play off game, SCC Napoli beat the three-time Audi Cup winners from Munich 2:0 (goals: Kalidou Koulibaly, Emanuele Giaccherini).

As in the Audi Cup 2015, the Audi Player Index was used again. On the basis of statistic performance values the evaluation system determined the Man of the Match on final day to be Kalidou Koulibaly (Napoli) in the third place play off match and Ragnar Klavan (Liverpool) in the final.

A family from Bayern with two children enjoyed an unforgettable Audi Cup. The family won a competition and was awarded with a very special prize from Airbnb: in accommodation erected directly on the touchline, the family was not only able to follow the games up close, but also spend a night alone in the Allianz Arena.