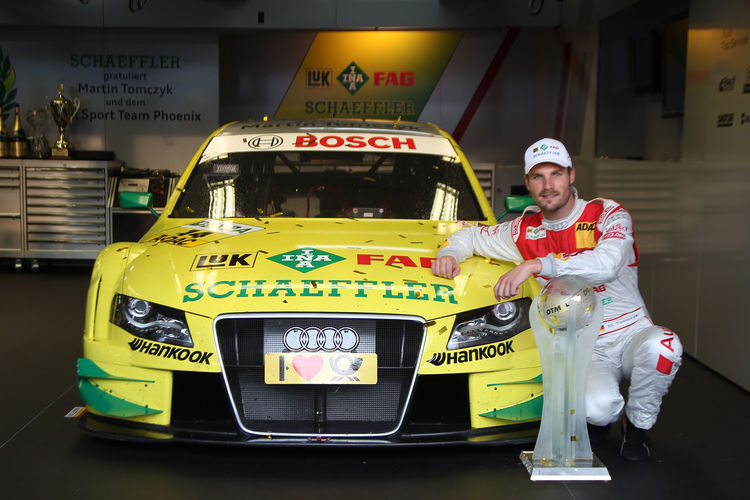 Martin Tomczyk should make some more room in his showcase: After the DTM Champion’s trophy that tips the scales at 25 kilograms, the Audi driver will soon receive the large “ADAC Christophorus” made of Nymphenburg porcelain. The trophy will be presented by Europe’s biggest automobile club to the 29-year-old Audi factory driver on having been voted “Motorsportsman of the Year.”

What does Martin Tomczyk have in common with Formula 1 star Michael Schumacher and DTM record champion Bernd Schneider? They are the only racers to have been voted “Motorsportsman of the Year” twice by the ADAC during the course of their career. While the driver from Rosenheim was more of a surprise winner in 2007, the award that is presented for superior performances in motorsport was only logical this year. In addition to his strong performances in the cockpit, the judging panel recognized Tomczyk’s fighting spirit, likeable demeanor off the track and his dedication as a motivator in the team.

“This recognition is a valuable and very significant accolade for me. I’m very happy about it and will certainly pick a place of honor for this trophy,” says Martin Tomczyk. “After the title win and the many congratulations, the ADAC award is the culmination of an absolute dream year. I want to thank the judging panel as well as all the people who accompanied me this year and were instrumental in making this award possible for me in the first place.”

One of them is Dr. Wolfgang Ullrich. “I’m very happy for Martin to receive this important and highly prestigious award this year,” says the Head of Audi Sport. “He has prevailed in the DTM with his untiring will and his driving skills. His strength and his friendly nature have made him particularly popular in the whole Audi squad.”