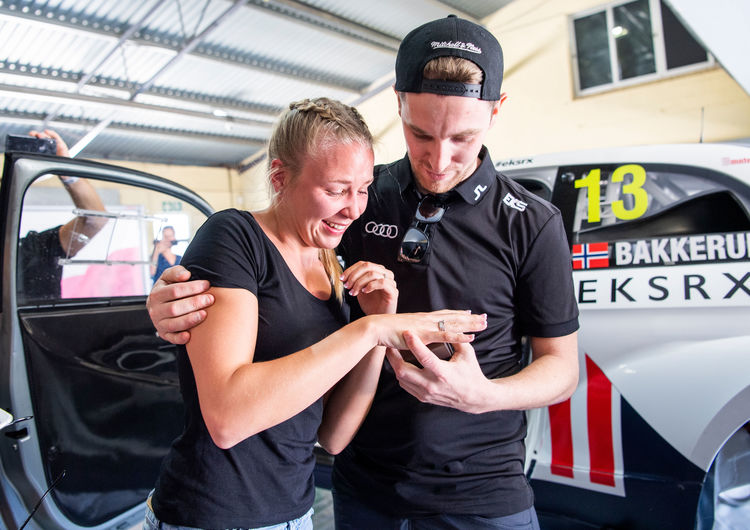 The cockpit of Andreas Bakkerud’s Audi S1 EKS RX quattro was the unusual scene for a less than commonplace marriage proposal at the finale of FIA World Rallycross Championship (World RX) in Cape Town. Bakkerud’s Norwegian compatriot Glenn Fossen surprised his long-time girlfriend Charlotte Karlsen on Friday with a seat fitting in Bakkerud’s rallycross car and popped the famous question: “Will you marry me?” The Norwegian in the cockpit was moved to tears and answered with “Yes!” “After seven years I really no longer expected that Glenn actually wanted to marry me,” said Karlsen. “It was only after I was sat in the cockpit that I suspected something was going on.” Bakkerud knows the bride and groom since they raced karts together. “I think I was even more nervous than the proposer,” said the Audi driver. “I didn’t have a clue anymore what I should tell Charlotte about my car until Glenn finally popped the question.”

The Killarney International Raceway near Cape Town is venue this weekend for the FIA World Rallycross Championship finale. The two Audi drivers Mattias Ekström and Andreas Bakkerud battle with their two Audi S1 EKS RX quattro cars for the World Championship runner-up slot. SPORT1 broadcasts the highlights from Cape Town on its main channel on Sunday (November 25) from 11 p.m. CET. The livestream on www.sport1.de and coverage on SPORT1+ start already at 1 p.m.