​A word from ... Hans-Joachim Stuck

{{ activeItem() }}
Twitter
03/05/21
.@abtmotorsport is returning to the @DTM in 2021 with two Audi R8 LMS entries. The driver line-up includes two Audi… https://t.co/NEgKa5fmQB
03/04/21
Wishing good luck to all of the Audi teams racing this week: 🇺🇸 @GT4America at @RaceSonoma 🇺🇸 @gt_america_ at… https://t.co/8Il0DLQdlH
03/02/21
Team Rosberg will run two Audi R8 LMS entries in the 2021 @DTM season. The team’s line-up includes Audi Sport drive… https://t.co/28Jii1M4dW
03/01/21
Wishing a happy birthday to Audi Sport driver @weerts_charles. &gt;&gt; https://t.co/lBfInLStG8… https://t.co/AvDY6qdG5B
Audi Sport on Twitter
{{ activeItem() }}
Facebook
02/27/21
We are saddened to hear the news about the passing of Hannu Mikkola, a longtime friend of Audi Sport and the World Rally champion with Audi in 1983. We send our sincere condolences to his family and friends.
02/26/21
Strong pace for the Audi e-tron FE07 in Diriyah: Fourth place for René Rast and Lucas Di Grassi moved forward seven places to ninth. Both cars in the points and tomorrow we race again. >> audi.com/FormulaE #FutureIsAnAttitude #DiriyahEPrix
02/25/21
Audi Sport ABT Schaeffler in the 2021 ABB Formula E World Championship. First-ever Formula E night races coming up on Friday and Saturday at 20:03 local time (18:03 CET). Broadcast info >> fiaformulae.com/watch #FutureIsAnAttitude #DiriyahEPrix
02/24/21
Three E-Prix so far in Diriyah since 2018 with our highlight in 2019: Lucas Di Grassi on the podium with a runner-up finish. Aiming for more this week in the first two night races in ABB Formula E history, February 26–27. >> audi.com/FormulaE #FutureIsAnAttitude #DiriyahEPrix
Audi Sport on Facebook 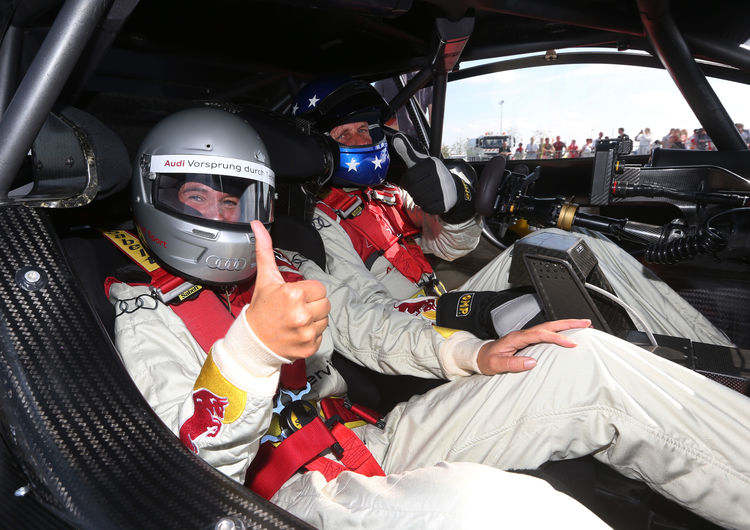 The 1990 DTM Champion about his experiences at the wheel of the Audi RS 5 DTM race taxi.

As part of the DTM weekend at Oschersleben you had your first opportunity to drive a modern DTM race car. Your impressions?
It was simply incredible. If I had a hundred thumbs, all of them would be pointing upwards. I wouldn’t have imagined a modern DTM car to be so impressive. On Friday, I drove a few laps to get used to the car. At that time, the tires and the brakes didn’t have the right temperature yet. On Sunday, it was really great: the longer you drive, the better the brakes work and the tires reach their operating temperature as well. You get even more grip and can accelerate even earlier. I even managed a couple of cool drifts. But it’s also clear that a race driver would always like more power output. About 100 hp more wouldn’t hurt a DTM car.

Do you see the DTM with different eyes following this experience?
As far as driving goes, there’s no doubt about it. It’s extremely tough for the drivers. There’s not a lot of room for making your personal mark. This is about the famous thousandth. You can’t afford to make a single mistake, but if you do you’ll be in fifth place before you know it. I take my hat off to the young guys in this series. They’re fantastic. But I’ve got to say: I had a great time, too!

During the weekend at Oschersleben, you also had to sign a lot of autographs. Were you happy about the response?
I really appreciate that my fans were there – ‘thank you’ to all of them! As the saying goes, applause is the artist’s reward.

Would you drive the Audi RS 5 DTM race taxi again?
Absolutely! Always with pleasure. Audi just needs to call me. Unfortunately, this year it’s not possible anymore, but next year: yes, yes, yes!