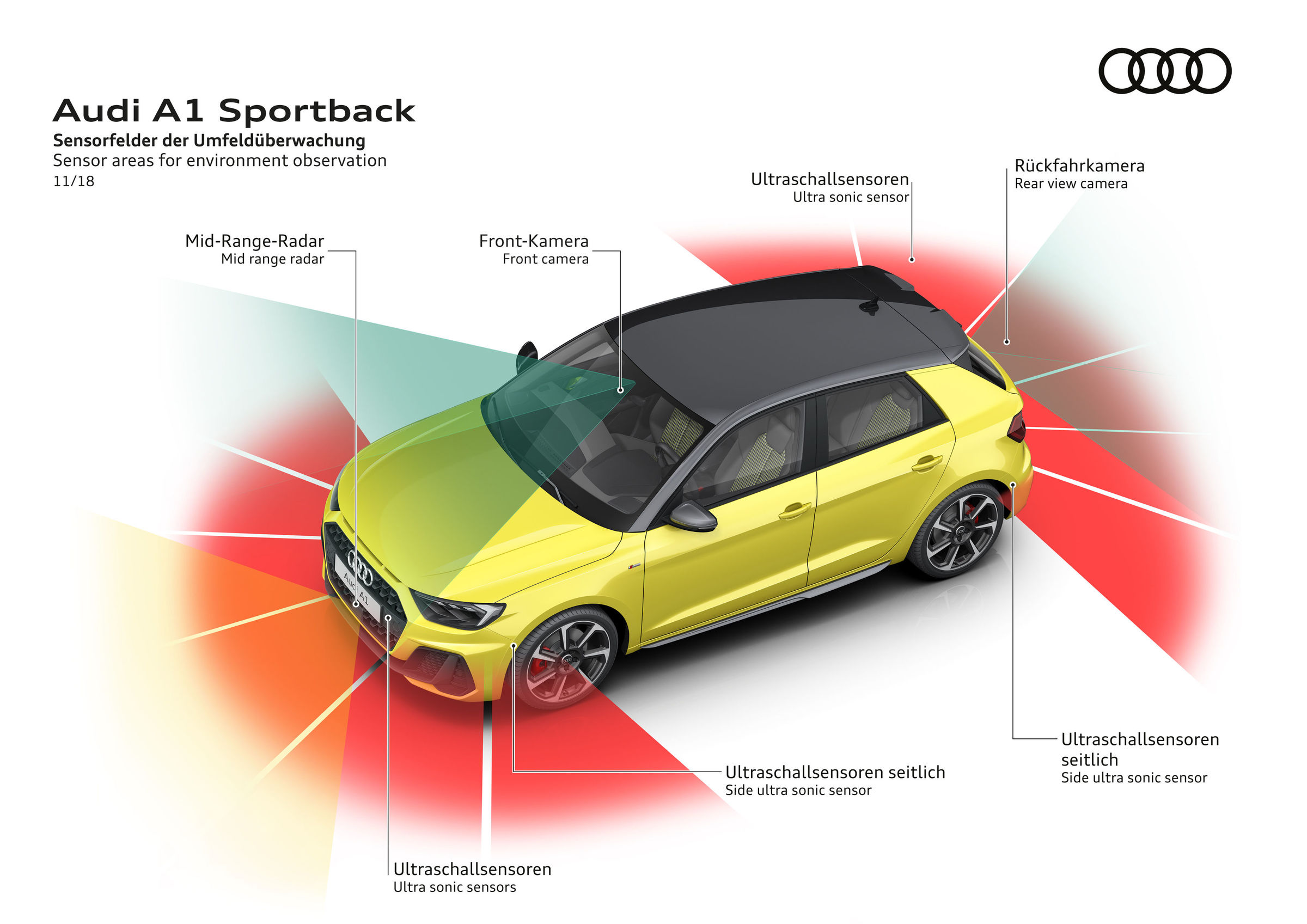 The driver assistance systems in the new Audi A1 Sportback come directly from the full-size class. They keep the car at the right distance from the car ahead, make it easier for drivers to maintain their lane, and they help with parking.

The standard lane departure warning helps the driver to keep the car in the lane. At speeds of 65 km/h (40.4 mph) and above, the system uses a camera to detect the lane markings and uses corrective steering interventions and warning vibrations to keep the car in the lane. Also standard is the speed limiter, which reliably prevents the A1 Sportback from exceeding a selected maximum speed.

Another element of the basic equipment is Audi pre sense front. The A1 Sportback sets the standard in its segment with this system. The radar sensor recognizes critical situations involving other vehicles, crossing pedestrians or cyclists ahead of the vehicle, even when visibility is poor such as in fog. If Audi pre sense front identifies a pending collision, it warns the driver according to a graduated concept. If there is no reaction following an acoustic and visual warning, the system initiates a short jolt of the brakes.

If the situation remains critical, the car decelerates automatically depending on the situation and surroundings, and brakes the vehicle to a standstill at low speeds. Depending on the conditions, the A1 Sportback can avoid a collision entirely or mitigate its severity by reducing the impact velocity. If necessary, the protective measures of the optional Audi pre sense basic are initiated. The front seat belts are electrically tensioned, the windows are closed and the hazard warning lights are switched on.

The adaptive cruise control is also radar-based. It keeps the Audi A1 Sportback at the desired distance from the vehicle ahead. The driver can set the distance in five steps and adjust acceleration using the modes in Audi drive select. If the vehicle is equipped with S tronic, the system covers a speed range of 0 to 200 km/h (0 to 124.3 mph); with the manual transmission, the range begins at 30 km/h (18.6 mph). In normal traffic, the Stop&Go function works together with the S tronic to bring the Audi A1 Sportback to a complete stop behind the vehicle ahead. If the driver pushes the brake after the vehicle comes to a complete stop, the system remains active. Otherwise it shuts off after approximately three seconds.

Parking: simpler than ever

The new Audi A1 Sportback offers various systems to make parking easier. For the first time there is a reversing camera in addition to the parking system, rear. The parking system plus also detects objects in front of the car and informs the driver acoustically and visually.