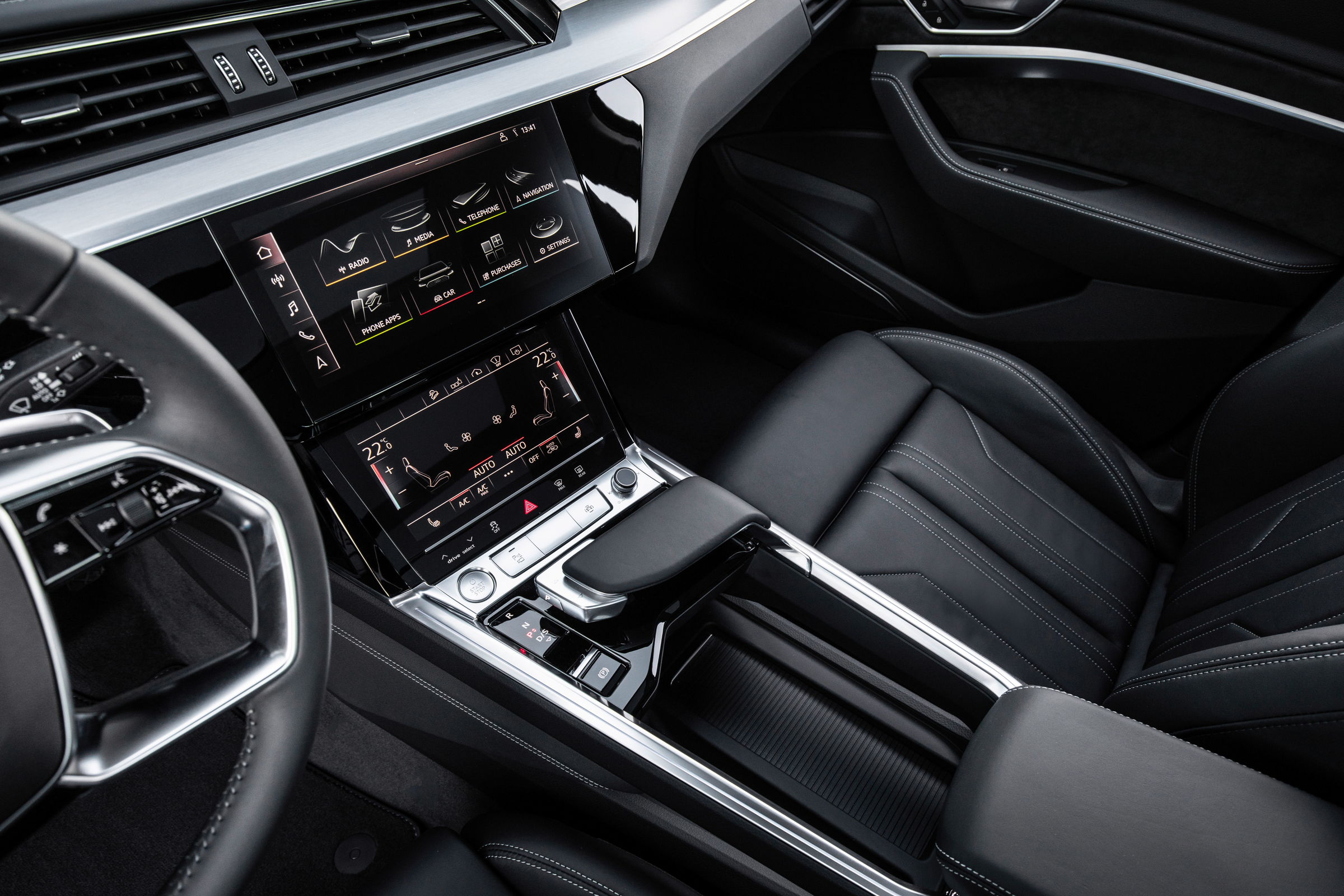 The Audi e-tron comes standard with a fully digital control and display concept. It represents the next step in a systematic evolutionary process. It began in 2014 with the introduction of the Audi virtual cockpit in the TT. A brand new control concept followed last year in the fourth-generation Audi A8. With its two MMI touch response displays, it offers the same operating logic that customers are familiar with from their smartphones, complemented by haptic and acoustic feedback. The Audi e-tron opens this digital control window a bit farther with the virtual exterior mirrors.

For the first time in a volume-production automobile, virtual exterior mirrors are available as an option in the Audi e-tron. They not only provide a new technology experience, but also many practical benefits in terms of comfort and safety. Integrated into the hexagonal end of their flat supports is a small camera, whose images are digitally processed and displayed on high-contrast, 1,280 x 800-pixel OLED displays in the transition between the instrument panel and the door. They blend harmoniously into the driver’s area’s wraparound concept.

The 7-inch displays come with automatic brightness adjustment and proximity sensors. If the driver moves their finger toward the surface of the touch display, symbols are activated with which the driver can reposition the image. A switching function allows the driver to use their display to also adjust the virtual passenger-side mirror.

Thanks to the sophisticated image processing, the displays provide a significantly better image than a conventional mirror in certain situations, such as in direct sunlight. The mirrors adjust automatically to three driving situations: highway, turning and parking. On the highway, the field of vision is reduced so that the driver can better estimate speeds when driving fast – other vehicles then appear larger in the display. If the driver signals an intention to turn or change lanes by indicating, the indicator view extends the image detail on the relevant side. This reduces the blind spot. The field of vision is extended downward when maneuvering and parking. The display visualizes the turn signal as a green contour on its outer frame and also displays notifications from the Audi side assist lane-change assistant and the exit warning.

Like all Audi full-size models, the Audi e‑­tron features the MMI touch response operating system. Its two large, high-resolution displays – the upper one with a diagonal of 10.1 inches and the lower one 8.6 inches – take the place of almost all conventional switches and controls. Operation is swift and reliable: When the finger activates a function, it triggers a tactile and acoustic click by way of confirmation.

In the upper display, the driver controls the infotainment, telephony, navigation and special e-tron settings – where they can activate a charging timer or specify the type of recuperation or function of the efficiency assist for example. The lower display is used for text input and management of comfort functions and the climate control system. The driver’s wrist can rest comfortably on the rest above the center tunnel console. The menu structure is intuitively logical and flat like on a smartphone, including freely configurable favorites and start screens. When the driver enters a term via the free text search function, the system already begins making suggestions after the first few letters are entered. Information on destinations and media is either stored on board or delivered from the cloud at LTE speed.

In addition to operation by the two touch displays, the driver can activate a host of functions using natural language voice control. The system understands freely worded commands and search queries. The dialog manager asks questions if necessary, allows corrections, offers choices and also defers to the speaker when interrupted.

Furthermore, the Amazon voice-activated assistant Alexa is making its Audi debut here. Drivers can use Alexa to get news, weather information and current sports scores. They can also order groceries or add items to their to-do list. Alexa streams music and audio books via Amazon Music and Audible, and provides access to a wide choice of Alexa skills. The Smart Home control system can be used to lock doors in the house, adjust the lights and close the garage door directly from inside the car – all with a short voice command or a question. Audi has seamlessly integrated the Amazon voice service into the MMI system of the Audi e-tron. Drivers don’t need an app on their smartphone to use it, nor do they have to pair their phone with the car. All they have to do is link the car to their Amazon account. They can then activate the service via the onboard voice control system.

The digital display and operating concept in the Audi e-tron is rounded off by the standard Audi virtual cockpit. Its display benefits from the very high resolution of 1,920 x 720 pixels – full HD – and new e-tron‑specific graphics. These visualize every key aspect of electric driving, from charging power to range. The driver can choose between two display modes via the multifunction steering wheel. In the classic view, the powermeter and speedometer are presented as large dials; in the infotainment mode, they appear smaller and the focus is on the navigation map. Customers who select the optional Audi virtual cockpit plus can call up an additional view that puts the powermeter right in the center. The head-up display complements the displays as an option. It projects key information directly onto the windshield so that it appears to float roughly 2.3 meters (7.5 ft) in front of the driver.