{{ activeItem() }}
Twitter
06/19/21
Qualifying begins at 12:00 local time (GMT-5). @ReneRastRacing will run in Group 2, @LucasdiGrassi in Group 3. Way… https://t.co/6KxTXioxF4
06/19/21
FP2 in Puebla: Dry conditions for the second free practice session. Qualifying is up next, beginning at 12:00 local… https://t.co/6gE7RwuNNa
06/19/21
FP1 in Puebla: @ReneRastRacing touched the wall slightly and had no drive afterwards, we changed the left-rear corn… https://t.co/t0u23qloil
06/19/21
Jump on board with @LucasdiGrassi in the Audi e-tron FE07 at the Autódromo Internacional Miguel E. Abed circuit. &gt;… https://t.co/GDAWqVW00d
Audi Sport on Twitter
{{ activeItem() }}
Facebook
06/19/21
RACE DAY in Mexico: The ABB Formula E Puebla E-Prix at 16:04 local time, GMT-5 (23:04 CEST). 🇲🇽 >> audi.com/FormulaE #FutureIsAnAttitude #PueblaEPrix
06/18/21
New venue: The ABB Formula E Puebla E-Prix is taking place at Autódromo Miguel E. Abed for the first time. Let’s hear from Lucas Di Grassi and René Rast as they share their thoughts on the circuit. >> audi.com/FormulaE #FutureIsAnAttitude #PueblaEPrix
06/16/21
We have three ABB Formula E victories in Mexico so far: 2017, 2018 and 2019. All three were at Autódromo Hnos. Rodríguez. This week, we will be racing at Autódromo Miguel E. Abed for the first time. >> audi.com/FormulaE #FutureIsAnAttitude #PueblaEPrix
06/14/21
Victory in New Zealand, GT racing podiums in Austria and Norway, as well as six trophies in touring car racing: Well done to our customers for the past race weekend! 🇳🇿 🇦🇹 🇳🇴 🇵🇱 🇫🇷 🇳🇱 🇬🇧 >> audi.com/GT3 >> audi.com/TCR #PerformanceIsAnAttitude
Audi Sport on Facebook 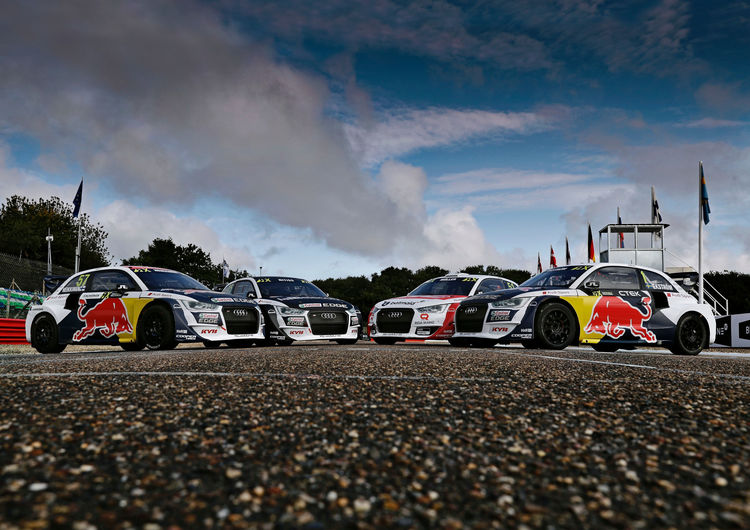 The 2017 FIA World Rallycross Championship is turning onto the finish straight, with round ten of twelve to be staged in Riga. A decision may already be produced in both the drivers’ and the teams’ classification. Ranked in third overall, Mattias Ekström is aiming to clinch his fourth victory this season. In the race in the Latvian capital, Audi and EKS are again competing with four Audi S1 EKS RX quattro cars. Alongside Ekström and the other two permanent EKS drivers, Toomas Heikkinen and Reinis Nitišs, Audi DTM campaigner Nico Müller will again contest the event.

Last year, Riga celebrated a brilliant premiere in the World RX. In spite of torrential rain falling some of the time, the enthusiastic fans stuck it out and provided the World Championship with a worthy setting. Subsequently, the event was recognized as the best in the 2016 World RX. “The track is fantastic and was good to drive even in rain,” says Ekström who came second behind Sébastien Loeb in the final. “This year, we already tested in Riga and will give our all to reduce our gap to the competition a little more. France was a step in the right direction. In qualifying, I’m shooting for the top spot and want to start from pole position in the semi-finals."

The track is part of the tradition-steeped Biķernieki Sports Complex and was built from scratch last year. The surface in the gravel sections is about as hard as that in Lohéac, France, resulting in a mix of fast tarmac sections and treacherous corners on both surfaces. Uniquely, the normal circuit and the joker section are completely parallel, both featuring a jump.

For local hero Reinis Nitišs, this is a very special race: “Riga is my home round, so that’s maximum motivation,” says the Latvian. His teammate Toomas Heikkinen, after finishing ninth overall last year, is aiming for the next final. “The track suits me and I know that I’ve got what it takes to finish in the top six,” says the Finn. Nico Müller is going to do another stint in the Audi S1 EKS RX quattro. The Audi DTM driver delivered a much-noticed premiere in the most recent round in France and would like to gather additional rallycross experience. His aim: the semi-finals as a minimum.