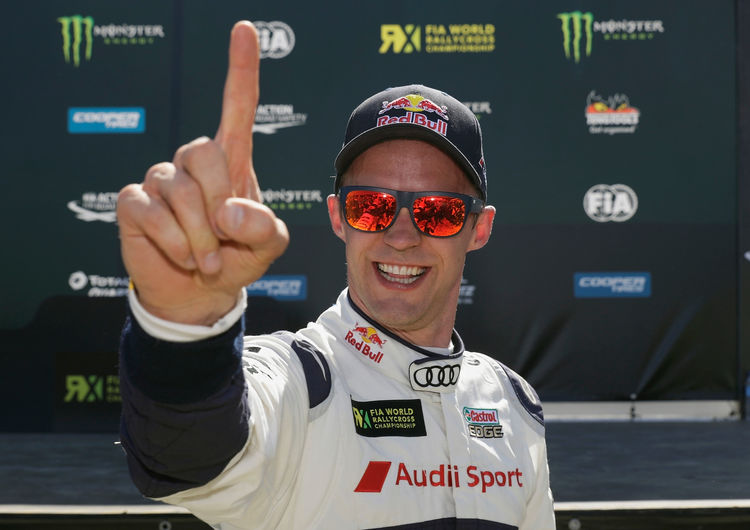 Everything continues to run according to plan for Mattias Ekström and his EKS team in the FIA World Rallycross Championship 2017. At the second round in Montalegre, the defending World Champion beat nine-time Rally World Champion Sébastien Loeb in a thrilling finale. With his second victory this season, the Swede extended his lead in the drivers’ classification. In the team classification, World Champion EKS sits in second place behind the PSRX Volkswagen Sweden squad.

Ekström and his team-mates Toomas Heikkinen (FIN) and Reinis Nitišs (LV) initially had to contend with some problems on the technically very demanding track close to the Spanish border. “We were not the quickest for a long time here this weekend,” admitted the overjoyed Ekström after the finale. “But we never give up. In the end is was one of the most hard fought wins in my rallycross career.” In the final, the 38-year-old took the lead after making a perfect start. However, after making a mistake on the last lap a tough battle erupted with Sébastien Loeb, which the Swede ultimately won.

On only his second competitive start in the Audi S1 EKS RX quattro, the 21-year old Nitišs also made the final for the best six drivers. The Latvian, the youngest ever race winner in World Rallycross Championship history, was fifth after a courageous race. “A big compliment to Reinis,” said Ekström. “He did a great job again, but also Topi proved again what he and his car are capable of.” The 26-year-old Heikkinen’s hopes of another podium finish came to a premature end after finishing fifth in his semi-final – last year the Finn finished third in Portugal on his first start for EKS.

In Montalegre the fans did not only enjoy thrilling motorsport. The Audi quattro R6 was on display in the paddock throughout the entire weekend. In 1980, Hannu Mikkola started the Rally Urbibel with the first quattro as course car – the beginning of Audi’s success story in rallying. For Audi and EKS the World Rallycross Championship continues with the home event at Hockenheim. From May 5–7, Ekström will once again compete in the DTM and the World Rallycross Championship and together with Heikkinen attempt to repeat the acclaimed one-two from last year as well as defend his unbeaten run this season.