{{ activeItem() }}
Twitter
06/13/21
With over 14,000 direct suppliers in about 60 countries, we aim to enable the identification of CO2 reduction poten… https://t.co/NBYRh8zesb
06/12/21
Mission:Zero. With Audi production sites in Brussels, Györ and Böllinger Höfe already carbon-neutral on balance, we… https://t.co/Nf5Oolocro
06/11/21
A statement of progress. We contribute to bridging the gap between sustainability and luxury. By doing this, we cre… https://t.co/tzs4YpnxQz
06/11/21
Audi charging hub: The future concept for quick charging addresses peak demands with high-power charging stations.… https://t.co/jo7VU3o6vQ
Audi on Twitter
YouTube
06/07/21

Changing the fashion world. Designer, Stella McCartney, is working every day to try and create a more sustainable future. From inspiration to sourcing to production - nature is at the core of everything she does. Combining technology and creativity to create magic. #Audi #FutureIsAnAttitude #DesignShanghai #DesignShanghai2021 #ExperienceDesign #emobility
YouTube
{{ activeItem() }}
Facebook
06/13/21
Proactive solutions. We rely on innovative technology to make sure that our products and services promote a more sustainable future. From enabling the identification of CO2 reduction potential along the whole supply chain to new ways of recycling or usage of AI for more transparency, we are working with over 14,000 direct suppliers in about 60 countries to achieve our vision. Be part of sustainable progress at Greentech Festival, June 16 – 18, 2021. Discover more http://go.audi/gtf-supplychain-fb #Audi #Q4e-tron #FutureIsAnAttitude #emobility#CelebrateChange #greentechfestival #greentechfest
06/12/21
On a mission. Creating progressive products for a better tomorrow calls for more sustainable solutions. While all European production sites procure 100% green electricity and Brussels, Györ and Böllinger Höfe are already carbon-neutral on balance*, our aim is for all production sites to meet this standard by 2025. Be part of sustainable progress at Greentech Festival, June 16 – 18, 2021. Discover more http://go.audi/gtf-production-fb #Audi #Q4e-tron #FutureIsAnAttitude #emobility#CelebrateChange #greentechfestival #greentechfest -------------------- *Audi defines net carbon neutrality as a status where, despite having exploited other possible reduction measures in relation to CO2 emissions caused by our products or activities, remaining and/or currently unavoidable CO2 emissions in connection with the supply chain, manufacturing or recycling of our vehicles are, at least in terms of quantity, offset by voluntary compensation projects worldwide. CO2 emissions generated during the operational phase of a vehicle (i.e. as of the time the vehicle is handed over to the customer) are not taken into account.
06/11/21
Driving without compromises. We contribute to bridging the gap between sustainability and luxury. By doing this, we create business plans that include 2nd life use cases such as using 26 1.5 liters recycled PET bottles in the Audi Q4 e-tron* upholstery**. Be part of sustainable progress at Greentech Festival, June 16 – 18, 2021. Discover more http://go.audi/gtf-ecosystem-fb #Audi #Q4e-tron #FutureIsAnAttitude #emobility#CelebrateChange #greentechfestival #greentechfest ------------------- *Audi Q4 e-tron: Power consumption (combined) in kWh/100 km: 17.8–15.8 (NEDC); 20.0–17.0 (WLTP); CO₂ emissions (combined) in g/km: 0. Power consumption and CO₂ emission figures given in ranges depend on the equipment selected for the vehicle. Further information: www.audi.com/dat **Optional equipment available at an additional charge.
06/10/21
Thinking ahead. A better tomorrow calls for better choices today. Our aim is to have 30 electrified models launched by 2025. We also provide our drivers with a green energy offer so that our customers don’t have to choose between sustainability and luxury.  Be part of sustainable progress at Greentech Festival, June 16 – 18, 2021. Discover more http://go.audi/gtf-product-fb #Audi #Q4e-tron #FutureIsAnAttitude #emobility #CelebrateChange #greentechfestival #greentechfest
Audi on Facebook 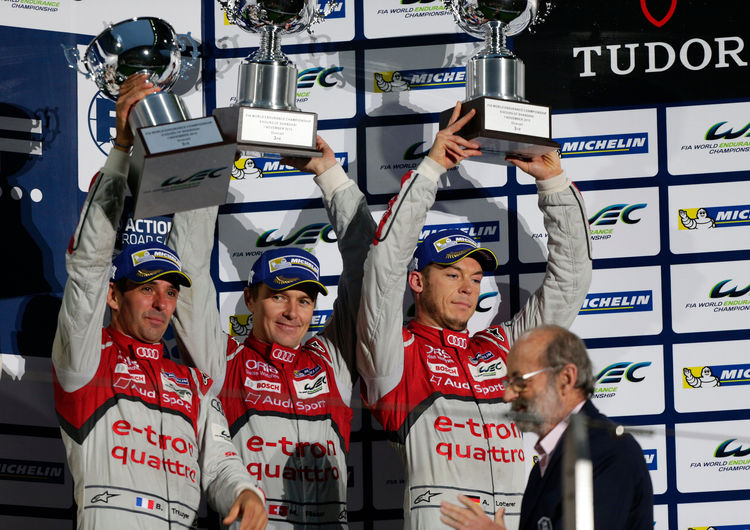 Audi, on taking positions three and four, has kept the title decision open in the drivers’ classification of the FIA World Endurance Championship (WEC) at Shanghai. Post-race quotes.

Dr. Wolfgang Ullrich (Head of Audi Motorsport): “In constant rain, the Audi R18 e-tron quattro was completely in its element and our drivers achieved good lap times. But our drivers were strong on a dry track too. When we were running on new tires and Porsche on used ones, a full-course yellow period came. So, in the last half hour, we weren’t able to attack again as planned. I don’t know if the result would have changed, but it would have been a lot closer. We were in contention and managed setting the fastest race lap. Some of the time, we were even running in positions one and two. The four best cars were within twelve seconds of each other shortly before the race’s midpoint – that shows how close and thrilling the race was for the spectators. We congratulate Porsche on winning the manufacturers’ world championship and will obviously be giving everything to decide the drivers’ classification in our favor.”

Chris Reinke (Head of LMP at Audi Sport): “We saw a tremendous race. On a wet track, a spectacular battle ensued. When the track began to dry, the relative strengths shifted a little. Not least thanks to a bold tire strategy, we were battling for second place up until the end but unfortunately it wasn’t enough. Sincere congratulations to our challengers Porsche, who not only deserved winning the race but the manufacturers’ world championship as well.”

Ralf Jüttner (Team Director Audi Sport Team Joest): “The results are not the ones we were hoping for.In difficult weather conditions, we showed that we’re able to lead the race but in the end, Porsche were in front again. We opted for a bold strategy and switched to slicks early. As a result, our cars were faster and Porsche were forced to switch early as well. That’s why our opponents had to pit for another splash-and-dash at the end, and the outcome of the race remained open for a little longer. Our cars were running impeccably and the pit stops were outstanding. Congratulations to Porsche on winning the manufacturers’ world championship, but the drivers’ world championship is still open. We’re going to battle until the end.”

Marcel Fässler (Audi R18 e-tron quattro #7): “As before at Fuji, we had good chances against Porsche in the rain, but as soon as it started to dry off, our rivals were faster again. So, we always had to take some risks. And because we’re always forced to pit a little earlier than our opponents we have a disadvantage in that the others always get to see what we’re doing first and can then react accordingly.”

André Lotterer (Audi R18 e-tron quattro #7): “We’re stuck in third place at the moment, although we were running in front some of the time. Even second place was within reach at the end. But it wasn’t quite enough – not least because we changed tires at each stop and Porsche didn’t. So far, we’ve mounted the podium in all the races. We’re not going to give up as long as there’s still a chance of clinching the drivers’ title.”

Benoît Tréluyer (Audi R18 e-tron quattro #7): “We worked hard the whole weekend and achieved a good set-up for our race car. We drivers gave our all. The conditions in the rain were tough, but this challenging task was a lot of fun too. As a driver, you can show your qualities particularly well in such circumstances. We remain optimistic because anything’s possible up to the last lap of the last race.”

Lucas di Grassi (Audi R18 e-tron quattro #8): “The race reminded me a lot of our showing at Fuji. We made no mistakes, had a good strategy and the guys delivered excellent pit stops – we can be pleased with that. But our lap times weren’t good enough, and that’s disappointing. We weren’t able to achieve more than positions three and four for Audi. But our goal remains to be in contention for victory. So, we need to clearly improve.”

Loïc Duval (Audi R18 e-tron quattro #8): “Our race was good. In difficult conditions, we made exactly the right tire choice twice, and a lot of other things went well too. However, we weren’t fast enough to finish on the podium. Our congratulations today go to Porsche on winning the championship. In Bahrain, we’re going to try everything that’s still possible in the drivers’ classification.”

Oliver Jarvis (Audi R18 e-tron quattro #8): “For the second consecutive time I drove the race start, and for the second time it was raining. The early stage was impeccable and the pace was good. Lucas took over the car in second place and subsequently led the race for a short time. When the track started drying off, Porsche were faster again. As a team, we showed our capacity to perform and our strategy was good. Even though we missed the podium, there’s no reason to criticize our performance.”