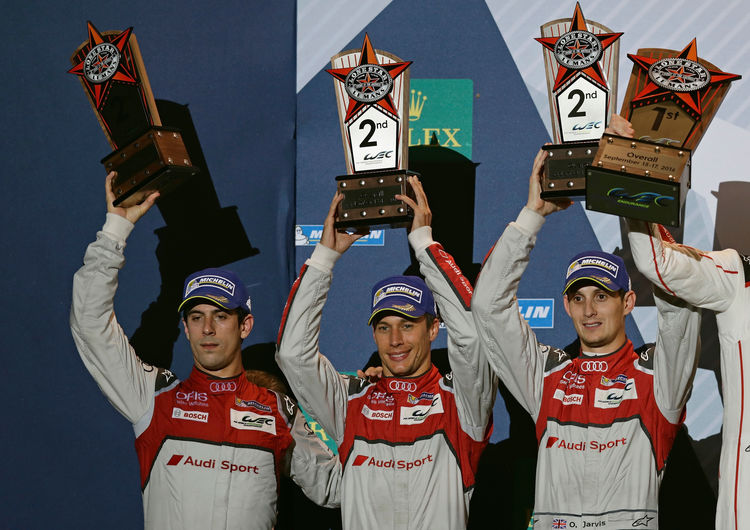 Dr. Wolfgang Ullrich (Head of Audi Motorsport): “I’m extremely disappointed. We clearly had the fastest cars on track from the beginning to the end. However, we were not able to convert this performance into success because we made mistakes ourselves and, on top of that, fortune wasn’t on our side today either.”

Stefan Dreyer (Head of LMP): “The weekend has ended in disappointment. Our car was very fast. We dominated for a long time, but in the end were not in contention for victory. There were too many issues such as the short-term electrical failure with car number 8 or the racing accident in which number 7 was involved without being at fault. You cannot win a race this way.”

Ralf Jüttner (Team Director Audi Sport Team Joest): “Our disappointment is huge.We had the fastest car the whole weekend, plus both R18 were running reliably. It wasn’t easy to lose the race following our one-two lead, but we managed to do so. The first pit stops weren’t good, we were unfortunate again in yellow periods, plus there were the loss of electric power with number 8 and the accident of number 7 that wasn’t our driver’s fault.”

Lucas di Grassi (Audi R18 #8): “As drivers, we only have a certain share in the race result. There are always additional factors like pit stops or racing fortune. In contrast to us, Porsche managed a perfect race. Towards the end, I defended myself against an attack by a Toyota while I was trying to close the gap to the Porsche in front. That was fun, but also pretty strenuous in the heat.”

Loïc Duval (Audi R18 #8): “I started the race without taking a big risk because I knew we were faster than Porsche. We worked hard and did a good job this weekend, but lost a race once more. When I was in the cockpit the car simply stopped due to an electrical issue. That cost us a lot of valuable time.”

Oliver Jarvis (Audi R18 #8): “The whole team soldiered on after Le Mans and prepared a great car for us. It’s not enough to be fast. You have to do a perfect job in all areas. Today, we didn’t get everything right. That’s why second place feels like a loss – we missed victory.”

Marcel Fässler (Audi R18 #7): “The race started really well and the R18 was fantastic to drive. We were confident, but the yellow period again put a spoke in our wheel, and while lapping we weren’t fortunate either. We were fast enough to win today – and so was our sister car. But, once more, that wasn’t enough.”

André Lotterer (Audi R18 #7): “After six hours, there was a sad ending in spite of a promising beginning. Both Audi cars could have won. After the yellow periods hadn’t gone well for us, Ben was unfortunate in traffic. That we had a very good car is important. This gives us confidence for the next race at Fuji.”

Benoît Tréluyer (Audi R18 #7): “While I was driving, our car lost some downforce at the front. I took that in my stride and was still pretty fast. The yellow period cost us time once more and afterwards I attacked. Then I overtook a GT race car but there was contact. For me, this was a racing accident because my opponent didn’t hit me intentionally, but lost control of his car.”