Victory and lead for Audi driver di Grassi before finale 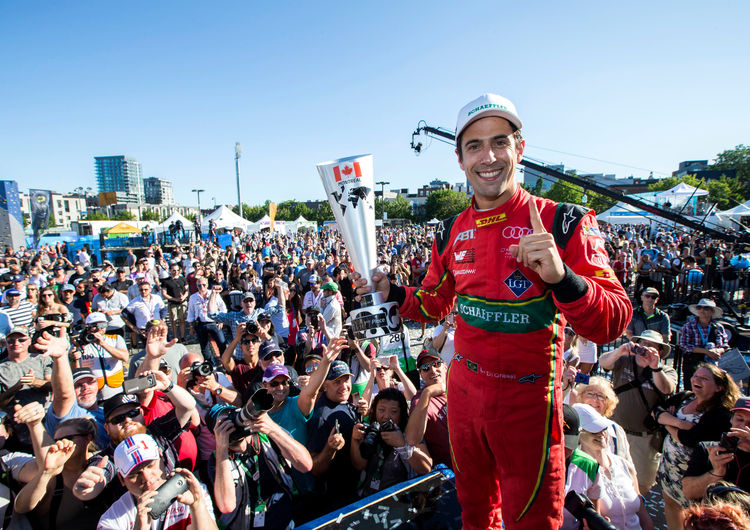 With a brilliant day Audi driver Lucas di Grassi achieved a good starting base in the first of two races of the Formula E season finale in Montreal (Canada), converting a ten-point deficit into a six-point advantage. As the leader of the standings, he will now be able to win the championship on Sunday on his own power. His teammate Daniel Abt thrilled the crowd with a strong comeback drive.

The eleventh and penultimate round in the Canadian metropolis was perfect advertising for the Formula E electric racing series, with Audi driver Lucas di Grassi as the leader all day. The 32-year-old secured pole position at noon, plus the first three points. In the 35-lap race, the Brazilian clinched a lights-to-flag victory. After having gained a large advantage in the first two thirds of the race, he lost it during a safety car period, but still was 0.350 seconds ahead on seeing the checkered flag, earning 25 points for his second victory this season. Due to the previous leader of the standings, Sébastien Buemi, only finishing fourth, di Grassi will start the last race of the 2016/2017 season with a six-point advantage and is the leader of the standings for the first time this season.

29 points in total will still be awarded in Sunday’s race – three for pole, 25 for a race victory and one for the fastest race lap. “Having scored 28 points, this has arguably been my best day in Formula E. And it came at exactly the right time. Thank you to my team that has invested so many hours in finding out why New York didn’t go so well,” di Grassi said after the race. “Tomorrow, we’re going to do what we always do: stay calm and focused and battle up until the very last lap.

His teammate Daniel Abt thrilled the fans in the street canyons of Montreal with a great race and numerous spectacular overtaking maneuvers that made him advance from grid position eleven to fifth place. In total, Team ABT Schaeffler Audi Sport scored 38 points and secured an early second place in the teams’ classification. The final FIA Formula E race will start on Sunday at 10 PM CEST.