Skip to content
We are using cookies for a better user experience.
07/12/21
Neuburg a. d. Donau
Sport

Victories for Audi in FIA WTCR and ADAC GT Masters

Links
{{ activeItem() }}
Twitter
08/05/21
[1/2] Good luck to the Audi teams racing this week: 🇧🇪 @DTM – @CircuitZolder 🇺🇲 @IMSA WeatherTech SportsCar Champi… https://t.co/3nvpbd8hOm
08/02/21
Well done to our customers: Adding to the @24HoursofSpa, @SaintelocRacing and @Fullmotorsport_ were successful in t… https://t.co/Hv7yHPSHqV
08/02/21
MEDIAINFO: Audi Sport customer racing newsletter: Audi R8 LMS GT4 sets course for titles in Europe &gt;&gt;… https://t.co/SWrBxtjFEf
08/02/21
What a race! The 2021 @24HoursofSpa provided a day full of action &amp; drama. In the end, we can celebrate a podium fo… https://t.co/nrzfKNaGiU
Audi Sport on Twitter
{{ activeItem() }}
Facebook
08/02/21
What a race! The 2021 24 Hours of Spa provided a day full of action and drama. In the end, we can celebrate a podium for Audi Sport Team WRT after a sensational drive from 54th on the grid to second place. Let’s look back on the biggest GT3 race of the year. >> audi.com/GT3 #PerformanceIsAnAttitude #Spa24h
08/01/21
Checkered flag at Spa. Audi Sport Team WRT #32 with the Audi Sport drivers Kelvin van der Linde, Dries Vanthoor and Charles Weerts fought their way through the pack to finish second in the 2021 24 Hours of Spa. >> audi.com/GT3 #PerformanceIsAnAttitude #Spa24h
07/31/21
RACE DAY in Belgium. The 2021 24 Hours of Spa gets underway at 16:30 CEST. Live stream and timing >> bit.ly/2HmCDk6 #PerformanceIsAnAttitude #Spa24h
07/30/21
On display at the 24 Hours of Spa: the Audi R8 LMS GT3 evo II, the latest evolution of our GT3 race car. Chris Reinke, Head of Audi Sport customer racing, tells us more about the model that customers can order for 2022, as a complete vehicle or an upgrade kit. >> audi.com/GT3 #PerformanceIsAnAttitude #Spa24h
Audi Sport on Facebook 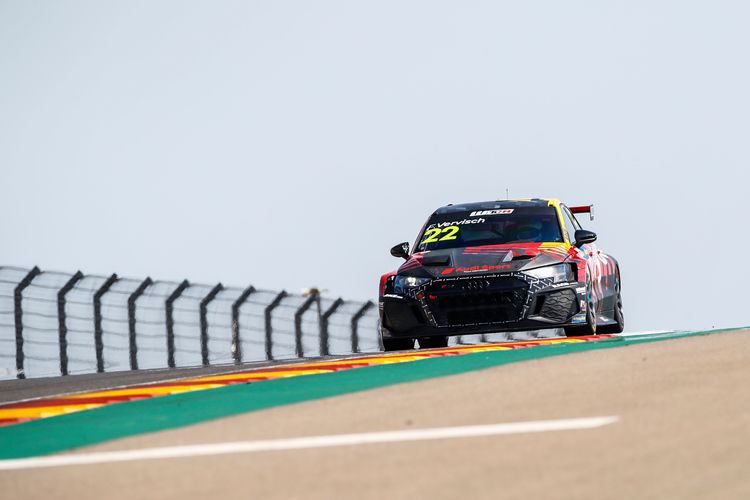 Audi Sport customer racing has every reason to be happy after the second race weekend in July: The first victory of the new Audi RS 3 LMS in the FIA WTCR, the first two wins of the season in the ADAC GT Masters and the lead in the standings in three classifications of the Nürburgring Endurance Series are the latest sporting highlights for the company.

First victory for new touring car: Exactly five weeks and one day after its race debut in the WTCR – FIA World Touring Car Cup, the new Audi RS 3 LMS scored its first victory. Audi Sport driver Frédéric Vervisch prevailed in the third event of the world’s top TCR race series in the second sprint in Spain. The Belgian laid the foundation for his success in qualifying on Saturday. On the Aragón circuit, the pro driver gained an advantage of 21 thousandths of a second in the battle for pole position in the crucial single-lap qualifying. In the race, he managed a perfect start. Vervisch defended his lead against pursuer Thed Björk and also stayed in front at the restart after a safety car period. In the end, Vervisch won by 1.1 seconds ahead of Björk and thus celebrated the third victory of his WTCR career. Gilles Magnus secured third place. The Belgian privateer also relies on a new Audi RS 3 LMS fielded by Comtoyou Team Audi Sport. In the first race, Dutchman Tom Coronel had already clinched the first podium result for the current Audi Sport touring car in third place. After three of eight races Magnus is 29 points ahead of team-mate Coronel in the WTCR Trophy for privateers. In the Junior classification of the racing series, he has increased his lead over Luca Engstler to 41 points. For Jean-Michel Baert’s Comtoyou team, the success at Aragón was already the fifth victory with Audi in the FIA WTCR. The second-generation Audi RS 3 LMS presented in February continued a long string of successes at Aragón. The predecessor model has won a total of 316 races in global TCR racing since 2017 and continues to be successful with customers. Audi Sport customer racing will start marketing the new model to its customers in the second half of 2021.

Podium finishes at Spa: In the Belgian club racing series Hundred Series by BGDC, three Audi privateer drivers scored two successes in the Ardennes. Italian Roberto Nale and his two Belgian teammates Olivier Grevesse and Gaël Frère won their class in the first race and finished third in the second race at Spa.

Trophies at Estoril: At the second round of the Portuguese Supercars Endurance race series, an Audi privateer pairing finished on the podium twice. Jorge and Pedro Silva crossed the finish line in second place in the TCR class in their Audi RS 3 LMS in the first race. A remarkable feat: Together with the winners from the TCR class, the Audi team from Veloso Motorsport was thus faster than the best GT4 sports car, which only followed in third place overall. In the second race, Jorge and Pedro Silva again climbed the podium as third in their class.

Second place on the Nordschleife: The two Danes Peter Hansen and Lars Nielsen returned from the fifth round of the Nürburgring Endurance Series with a trophy. The two Scandinavians finished second in the TCR-Am classification in the four-hour race in the Audi RS 3 LMS fielded by the MSC Sinzig team.

Two wins at Zandvoort: The Audi R8 LMS was unbeatable at the third event of the 2021 ADAC GT Masters in the Netherlands. On the revamped Zandvoort circuit with its challenging new banked corner, Audi Sport’s customer teams showed strong performances as early as in qualifying. Swiss privateer Ricardo Feller secured pole position for himself and team-mate Christopher Mies in the first qualifying session at the last minute. The 21-year-old Feller drove the start in Saturday’s first race, set the fastest lap time and handed over his cockpit to Audi Sport driver Mies on the 17th lap. The German returned to the track in second place but the now leading Lamborghini team had made a mistake. It received a penalty and dropped back. Christopher Mies and Ricardo Feller deservedly clinched the first victory of the season in the ADAC GT Masters for Audi and for Team Montaplast by Land-Motorsport with a lead of 2.6 seconds. There was no way around the Audi R8 LMS on Sunday either. Audi Sport driver Dries Vanthoor from Belgium had secured grid position one for Team WRT and pulled away from pursuer Raffaele Marciello in the AMG-Mercedes by almost two seconds in the first half of the race. Fellow Audi Sport driver Charles Weerts took over the Audi at the pit stop and didn’t let a safety car period disturb his rhythm either. By the time he crossed the finish line, he had outdistanced the Mercedes-AMG chasers by 3.9 seconds. After three of seven events, Mies and Feller are the best Audi drivers in the field in third place in the standings. Likewise, Montaplast by Land-Motorsport is in third position in the team standings. Only six points separate the top three of the 19 outfits in the field.

Championship lead after two podium finishes: Phoenix Racing took the championship lead in the Speed Trophy on the fifth race weekend of the Nürburgring Endurance Series. Ernst Moser’s team scored a podium result with the Audi R8 LMS in both four-hour races on Saturday and Sunday during the double weekend. Vincent Kolb and Audi Sport driver Frank Stippler dropped from position two to fifth in the first competition after a poor start, but caught up again in the course of the race. In the end, Kolb fought a fascinating duel with Mercedes-AMG driver Adam Christodoulou for second place, lost some time when lapping other competitors and in the end had to admit defeat by only five seconds. After finishing third on Saturday, Kolb again engaged in a thrilling duel in the closing stages on Sunday, this time with BMW driver Christian Krognes. After 29 laps, Kolb crossed the finish line in second place. The privateer driver from Frankfurt thus celebrated a podium result with teammate Frank Stippler for the third time in a row. Phoenix Racing has thus taken the lead in the Speed Trophy ahead of 29 other teams. After six of nine races on the Nordschleife, the private Audi squad’s lead over the second-placed BMW Junior Team is 28 points. At the same time, Vincent Kolb leads the SP9 Pro class. Privateers Patrick Kolb and Lorenzo Rocco di Torrepadula from Car Collection Motorsport are leading the SP9 Pro-Am class with another Audi R8 LMS.