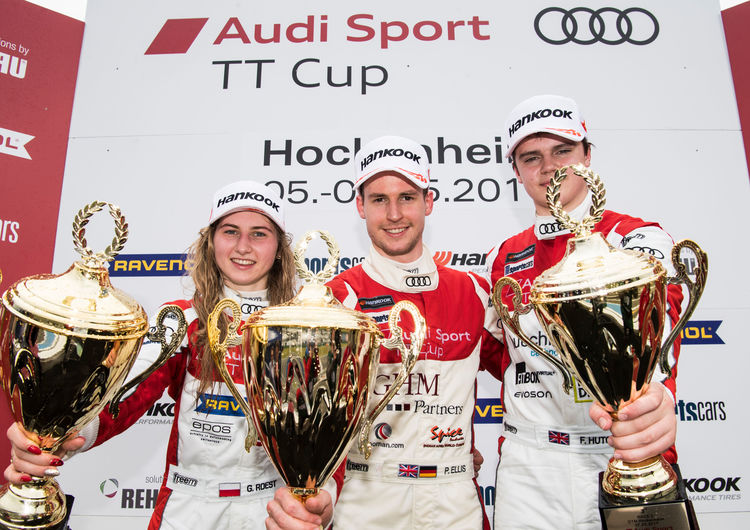 The Audi Sport TT Cup began the 2017 season with two closely fought races. Philip Ellis prevailed in both races at Hockenheim in front of Gosia Rdest, whilst two rookies drove to third place in each race.

“14 new participants, two established drivers and both our guest drivers delivered two spectacular races with some thrilling battles over positions,” said Chris Reinke, Head of Audi Sport customer racing. “The 2017 cohort have already given us some superb action today. This season is guaranteed to be an exciting one.” Even though Philip Ellis has brought with him much experience from last year, the Briton had to fight hard for his two victories. In the first race on Saturday, the 16-year-old Swiss rookie Yannik Brandt led from the start to the middle of the race, before he lost first place to Ellis. Gosia Rdest also overtook the newcomer. The Pole crossed the line 1.883 seconds behind Ellis and in front of Brandt.

In the second round on Sunday, Gosia Rdest made her mark right from the start. She passed the Dutch pole-sitter Milan Dontje at turn two and went on to lead the race for ten laps. As the tires of her Audi TT cup began to degrade, the pursuer Ellis took the lead with three laps to go after a rigorous maneuver and celebrated his second victory in two races with a three-second advantage. “That was a really tough battle,” said Ellis. “Without taking some risks I wouldn’t have been able to clinch my second win.” Nevertheless, Gosia Rdest has every reason to be proud of herself: she is the first female driver to finish in second place since the 2015 inception of the Audi one-make cup. The 24-year-old student, who received her trophy from the nine-time Le Mans winner Tom Kristensen, is second on the table behind Ellis after two out of 14 rounds.

Finlay Hutchison delivered a strong fight to take third place on Sunday: The 17-year-old started in twelfth, but, after some impressive and fair duels, he worked his way to third on the podium and was proud to receive his trophy from his Scottish compatriot Allan McNish.

Fabian Vettel was happy making his race debut in the Audi Sport TT Cup and collecting points in both races. The 18-year-old brother of Formula 1 World Champion Sebastian Vettel took eight points on Saturday and went even better on Sunday, starting from eleventh and finishing eighth. He is now eighth on the table after the first race weekend.

The three-time Le Mans winner Benoît Tréluyer came to Hockenheim as a guest starter, driving to fifth place on Saturday then improving to fourth on Sunday. Another guest starter was the journalist James Taylor. The Briton finished tenth on Saturday and crossed the line in fourteenth on Sunday – both times in front of a few permanent drivers.

In just three weeks’ time comes the next event on the calendar for the junior drivers: the Audi Sport TT Cup will next be presented in the supporting program of the Nürburgring 24 Hours, where Audi Sport customer racing will be fighting for its fourth overall victory in an Audi R8 LMS. In addition, Audi fans can look forward to a premiere: the new Audi R8 LMS GT4 will experience its baptism of fire.