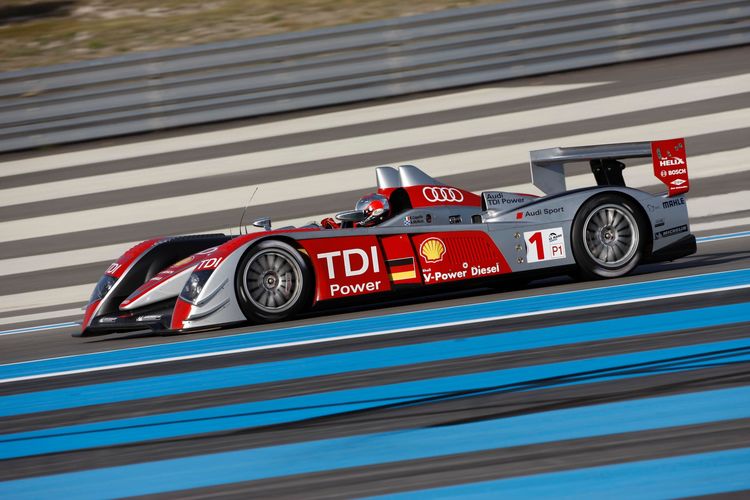 Even in its third year of racing the Audi R10 TDI still experiences some débuts: on the first weekend in April, the diesel-powered sportscar will compete simultaneously for the first time in two races, in America and in Europe. In St Petersburg (U.S. state of Florida), on Saturday (5 April), the second round of the 2008 American Le Mans Series will be staged. One day later, the European Le Mans Series kicks off with the 1000-kilometre race at Barcelona (Spain).

For the more than 650-hp strong Audi R10 TDI conditions in these two events could hardly be more different. The 2.918-kilometre track along St Petersburg’s southern marina is one of three city street circuits on the schedule of the 2008 American Le Mans Series. Lasting only 1:55 hours, St Petersburg is the second-shortest race of the season.

The Circuit de Catalunya on the outskirts of Barcelona has been the venue of the Spanish Formula 1 Grand Prix since 1991. For the past two years, it has also been host to the Spanish DTM round. The 4.655-kilometre Grand Prix circuit with its fast turns is considered particularly demanding. For the 1000-kilometre distance, the sports prototypes, depending on weather conditions, will need between five and six hours.

With the Audi R10 TDI, AUDI AG is impressively demonstrating how today’s modern diesel engines combine powerful performance with good fuel economy – and that racing cars do not have to be noisy. Its manufacturer’s commitment in the Le Mans Series gives Audi the opportunity to convince even more customers in Europe of the merits of TDI technology.

Every second Audi is a TDI

For the first time in its history, AUDI AG will be delivering more than one million new vehicles worldwide. About half of them are equipped with TDI engines. The TDI engine has established itself in virtually all markets of the world – except the United States. There, the Audi R10 TDI is paving the way for the upcoming TDI offensive. In 2008, Audi is launching the world’s cleanest diesel engine with an ultra low emission system on the U.S. market.

In St Petersburg, Audi clinched a 1-2 victory last year, proving that it is possible to be successful with a sportscar developed for the 24 Hours of Le Mans on a much slower city street circuit as well. Dindo Capello and Allan McNish, who triumphed in Florida in 2007, are contesting the Le Mans Series this year, in the #1 car. Their team-mates at Audi Sport Team Joest are the two youngsters Alexandre Prémat and Mike Rockenfeller.

In St Petersburg, Lucas Luhr and Marco Werner as well as Frank Biela and Emanuele Pirro are competing for Team Audi Sport North America. In Florida, Audi’s primary rivals are Acura/Honda and Porsche, at Barcelona, the closest rival is Peugeot.

“The weekend is a major challenge for Audi Sport, both in terms of logistics and the demands made on personnel, particularly as the 2008 DTM season presentation is taking place in Düsseldorf at the same time,” says Head of Audi Motorsport Dr Wolfgang Ullrich. “Still, in St Petersburg as well as at Barcelona we want to leave a better impression than we did at the season opener at Sebring – although we’re fully aware of the fact that we’ve got strong competition on either side of the Atlantic and are facing difficult tasks.“

Alexandre Prémat about Barcelona: “Barcelona is a big challenge. The circuit is very fast and has some high-speed turns, which are good fun. At some places the tarmac is a bit bumpy, but that’s not a problem. In the GP2 I won ahead of Lewis Hamilton there. Of course I’d like to repeat that in the LMS...”

Barcelona is the 21st race in the history of the Le Mans Series ... The series is staged at the Circuit de Catalunya for the first time ... In 2008, Audi contests the Le Mans Series for the first time as a manufacturer ... Alexandre Prémat will celebrate his 26th birthday on the day of qualifying at Barcelona ... The LMS uses the Grand Prix circuit at Barcelona, the DTM the shorter national circuit version ... In the DTM, Audi started from the pole position at Barcelona both times, in 2006, Martin Tomczyk clinched victory for Audi in the DTM’s début race there ... Allan McNish contested the Le Mans Series for Audi customer teams in 2004 and 2005 and won three races at the time

The schedule at Barcelona

Emanuele Pirro about St Petersburg: “I was positively surprised last year – by the circuit as well as by the organization of the event. St Petersburg is one of the nicest races of the championship. The circuit is pretty technical and strenuous. But there are straights as well on which we can leverage the strengths of our TDI engine.”

Audi Sport North America celebrated a 1-2 victory in St Petersburg in 2007 with Dindo Capello/Allan McNish, ahead of Emanuele Pirro/Marco Werner ... Frank Biela contests his first race in the R10 TDI since his victory at the 24 Hours of Le Mans in 2007, Emanuele Pirro his first since Detroit 2007 ... Frank Biela and Emanuele Pirro, who – as a team – have so far celebrated 16 overall victories in the American Le Mans Series, last competed together in America at Sebring in 2007 ... With an average qualifying speed of 165 kph, St Petersburg was the fastest city circuit in the American Le Mans Series last year ... The R10 TDI cars fielded in St Petersburg were not used at the Sebring season opener ... With 61 overall victories so far, Audi is the most successful brand contesting the American Le Mans Series

The schedule in St Petersburg