Tom Kristensen quickest of the day at Brno 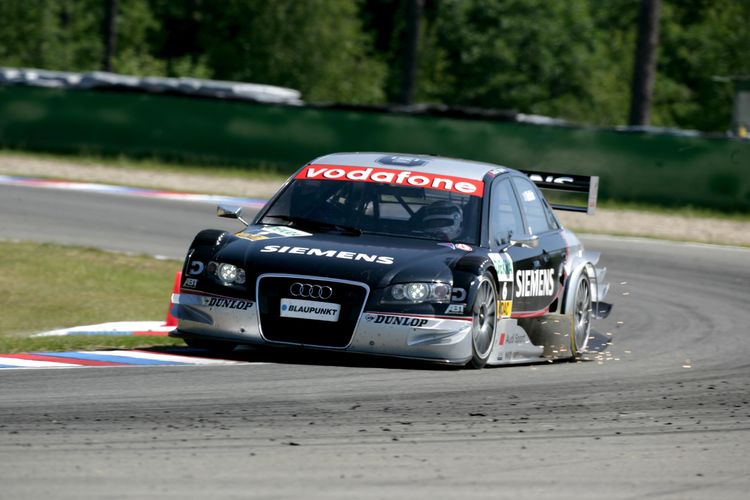 On his DTM debut at Hockenheim, Allan McNish, found himself finishing a practice session in last place for the first time ever in his career. At Brno (Czech Republic), the former Formula 1 driver proved on Friday that he is a quick learner and getting a progressively better handle on Europe’s most popular Touring Car series: at the wheel of the Audi A4 DTM entered by Audi Sport Team Abt Sportsline, the Scot clocked his first best time in the DTM in the morning session. His time of 1m 54.700s was only undercut in the second test in the afternoon by six-time Le Mans winner Tom Kristensen, who claimed the quickest time of the day – 1m 54.433s – for Audi, despite the fact that the Dane had only been able to complete five laps in the morning due to an engine-related problem.

Like last year, both test sessions showed that the demanding circuit at Brno seems to suit the Audi A4 DTM particularly well: in the morning, title defender Audi clinched positions one to five. In the afternoon, four Audi drivers finished among the top six. And the drivers of last year’s A4 cars must be reckoned with at Brno as well: Christian Abt in the cockpit of the Audi A4 DTM entered by Audi Sport Team Joest clocked the fourth-best time and was thus the quickest driver of a car from the previous season.

All Audi drivers on Friday concentrated on the set-up for Sunday’s race because the circuit at Brno is considered to be especially tough on the tyres. The starting positions will be decided in Saturday’s Qualifying and Super Pole sessions. ARD will broadcast live from Brno, starting at 2 p.m. (local time).

Tom Kristensen (Audi Sport Team Abt #5)
5th place / 1st place, 1m 54.433s
“Because of a technical problem I hardly got to do any driving this morning. But thanks to the valuable data from my team-mates and the great job done by the mechanics I was able to clock the best time this afternoon and collect a lot of data, which we’re going to evaluate now. Although the quickest time on Friday doesn’t mean anything at all, it always makes me sleep like a baby and it shows how good my Audi A4 is.”

Allan McNish (Audi Sport Team Abt #6)
1st place / 5th place, 1m 54.700s
“This has been a very good day. It’s my first time here at Brno and I immediately took a liking to the circuit. It has character and represents a challenge. My A4 has some improvements based on the findings gained at Spa and during the latest tests. The car’s balance is very good, perhaps there’s a bit too much oversteer. But we’re among the front runners.”

Mattias Ekström (Audi Sport Team Abt Sportsline #1)
2nd place / 3rd place, 1m 54.892s
“I really like the circuit at Brno, and like it even better this way: there’s a lot of dirt on the track, which even makes for a bit of a rally feeling. And, let’s face it, that’s what suits me in particular. All kidding aside though: we have made great progress today and completely finished our extensive testing programme.”

Martin Tomczyk (Audi Sport Team Abt Sportsline #2)
3rd place / 6th place, 1m 55.076s
“I’m pretty satisfied. My long run wasn’t one hundred per cent perfect, we still need to do some work on the rear axle. Today we only tested for the race and are now well sorted for this. Tomorrow morning we’re going to concentrate on the optimal set-up for Qualifying.”

Christian Abt (Audi Sport Team Joest Racing #14)
4th place / 17th place, 1m 55.636s
“All of our work today was focussed on the race. Tonight I can go to bed completely relaxed because the car is working well. In the morning, I was fourth – and I know that I would have been at the very front again in the afternoon if I had put on fresh tyres. But I decided it was better to save them for Sunday.”

Rinaldo Capello (Audi Sport Team Joest #18)
20th place / 13th place, 1m 55.925s
“I’m happy, because this afternoon we finally solved the understeer problem. We changed two things on the car, which helped. At first, I had to get used to having real grip at the front axle. That’s why I didn’t take as much advantage of the new tyres as I could have. Yet I’m very satisfied with the time I clocked with used tyres.”

Pierre Kaffer (Audi Sport Team Joest Racing #15)
7th place / 18th place, 1m 55.962s
“I like the circuit at Brno and am actually quite satisfied with the way the day went – except for my excursion into the gravel trap just before the end. We’re heading in a good direction with our set-up. I’m sure you’ll find us closer to the front tomorrow.”

Frank Stippler (Audi Sport Team Joest #19)
19th place / 16th place, 1m 56.085s
“The car’s not handling quite the way I’d like it to. We need to try and change that by tomorrow. Perhaps I also need to adjust my driving style to this circuit, which is new to me. Generally, I like Brno. The circuit offers a lot of variety, it’s not one of those ‘synthetic’ types.”

Hans-Jürgen Abt (Team Director Audi Sport Team Abt Sportsline): “I’m proud of our compact team performance: all four cars are among the top six – even though Friday’s results are not very conclusive, this is a nice feeling. Particularly after last year’s experience when we celebrated the Champion’s title here, Brno brings back a lot of good memories. And of course we’d like to repeat this feeling. We’ve taken the first step today by fully focussing on our Friday programme, which we completed with clockwork precision.”

Ralf Jüttner (Technical Director Audi Sport Team Joest): “Today we tried out different things and are satisfied with our work. The long runs were very good, and that makes us feel confident for the race. Today, we didn’t do any work to prepare for the Qualifying, we’re going to make up for this tomorrow in the Free Practice.

Dr Wolfgang Ullrich (Head of Audi Motorsport): “We successfully completed our programmes for Friday with all of our cars consequently. Considering the long runs we’ve seen, I think that we’ve created a pretty good starting base for this weekend.”