Skip to content
We are using cookies for a better user experience.
10/15/18
Neuburg a. d. Donau
Sports

Titles for Audi Sport in Australia, France, New Zealand and in the United States 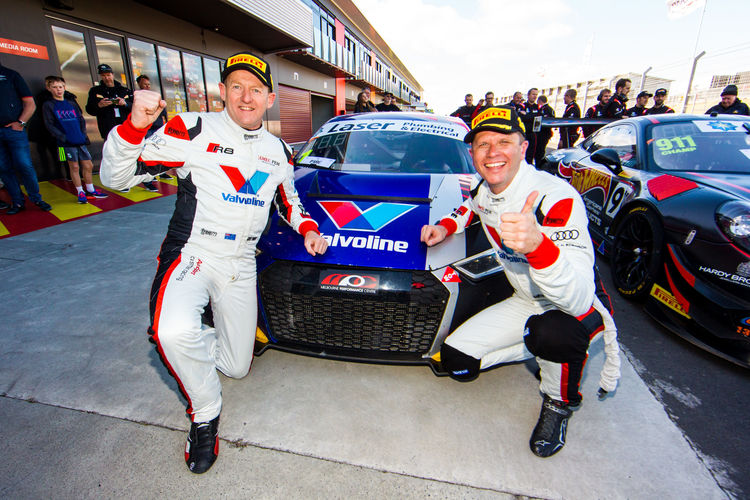 Audi Sport customer racing experienced a first-rate weekend with its customer racing teams. In GT3 racing, the customers recorded championship successes in Australia and New Zealand, the GT4 race car prevailed over the competition in France and the TCR model in North America.

Fourth title in Australia for Audi Sport: Audi Sport customer racing Australia has won the next championship title in an important market. Following Mark Eddy (2011) and Christopher Mies (2015), Geoff Emery, as in 2017, has now again won the title in the Australian GT in an Audi R8 LMS. Nine drivers with title chances had traveled to the finale of the Australian series at Hampton Downs in neighboring New Zealand. Professional driver Garth Tander, literally on the final kilometers of the Hampton Downs 500, helped his teammate, Geoff Emery, win the title: On the 83rd of 95 laps, Tander pulled off the crucial overtaking maneuver. After about two and a half hours of racing, the Audi R8 LMS of Team Valvoline scored victory with a 1.159-second advantage – enough for Emery’s title success. In the Australian Endurance Championship that was held as well, another Audi privateer driver duo – Tony Bates/Daniel Gaunt – clinched a championship runner-up finish at the same racing event.

Audi customer team wins South Island Endurance Series: Team International Motorsport (IMS) has won the 3-hour endurance classification on New Zealand’s South Island. Gentleman driver Neil Foster, who had won the title on the North Island two years earlier, prevailed over the competition in all three races in the south in an Audi R8 LMS. In the finale on the circuit of Timaru, he celebrated his title success after, together with Gene Rollinson, having previously decided the race in his favor with a two-lap advantage.

Two second places in finale: Absolute Racing finished the Blancpain GT Series Asia season at Ningbo in an Audi R8 LMS with two second places. Franky Cheng/Martin Rump started race one from sixth on the grid and claimed second place. In race two, Anthony Liu/Alessio Picariello improved from eighth on the grid to second position. In the final classification, Cheng/Rump achieved position three in the Silver Cup classification while Absolute Racing recorded third place in the teams’ classification. The two Japanese Naoto Takeda/Takuya Shirasaka had previously scored an early title win in the Am Cup of the Asian racing series in an Audi R8 LMS.

Podium and Junior European title at Spa: Team Car Collection Motorsport celebrated a podium success in the 24H Series. In round seven of the GT racing series, Max Edelhoff, Elmar Grimm, Dr. Johannes Kirchhoff and Ingo Vogler in an Audi R8 LMS clinched third place overall after twelve hours of racing at Spa. At the same time, this earned the drivers second place in the amateurs’ classification. While the German driver quartet finished the European classification in second place of Class A6, in the continental classification of the racing series, it took the lead of the standings in this class before the finale in the United States. Max Edelhoff, who had been best rookie in the past two years, won the junior class of the European classification.

More success for Audi in the GT4 category: The Audi R8 LMS GT4 continued its worldwide winning streak in France. Following three drivers’ titles and one teams’ classification both in the United States and in the GT4 European Series, Audi has now finished at the very front in France as well, thanks to Team Saintéloc Racing. After the two Frenchmen Gregory Guilvert/Fabien Michal retired in the finale at Le Castellet in Saturday’s race following contact with a rival, the duo fought back on Sunday to sixth position. As a result, they won the Pro Am drivers’ classification while Saintéloc Racing secured the teams’ title. With more than 40 participants the French GT4 racing series is the strongest national championship in Europe and one of the best worldwide. For the long-standing Audi customer team of Sébastien Chetail, these were not the first titles this year: With the GT3 version of the Audi R8 LMS the squad had previously secured the Pro Am Cup in the drivers’ and teams’ classifications of the Blancpain GT Series.

Class victory in Belgium: Fox Motorsport celebrated its next class victory in the 24H Series. After the British customer team had previously won its class in Portugal in July, the Audi R8 LMS GT4 was not to be beaten in the Spa 12 Hours either. Ben Clucas/Andrew Perry/Jamie Stanley again decided the GT4 classification in the Ardennes in their favor. As a result, Fox Motorsport earned the runner-up finish in the European GT4 teams’ classification. Second place in the European GT4 drivers’ classification went to the three Britons as well. Altogether, this marked the third endurance racing class victory this year for the Audi R8 LMS GT4 after Phoenix Racing had scored a one-two result in the series’ season opener in Dubai.

Success at the Nürburgring: Stefan Wieninger finished the Spezial Tourenwagen Trophy season with a class success in an Audi R8 LMS GT4. With Team LMS Engineering he won his category in the final race at the Nürburgring ahead of the nominally more powerful GT3 sports cars.

Three titles in the United States: As in 2017, the Audi RS 3 LMS again won several titles in North America this season. After Team Compass Racing won the TC class in the Pirelli World Challenge last year, Karl Thomson’s squad now prevailed in the IMSA Continental Tire SportsCar Challenge. In the finale at Road Atlanta, Britt Casey jr./Tom Long only needed third place to win the title ahead of their teammates, Rodrigo Sales/Kuno Wittmer. Race victory was secured by Tom O’Gorman/Kenton Koch from eEuroparts.com Racing ahead of Michael Johnson/Stephen Simpson from JDC-Miller MotorSports. They all relied on the Audi RS 3 LMS. As a result, Audi’s TCR touring car remained unbeaten in all ten races. Compass Racing additionally won the teams’ classification and Audi the manufacturers’ classification of this TCR series.

Strong conclusion in Denmark: In the finale of the Danish Endurance Championship, two trophies went to Team Dream Concept Motorsport. Daniel Lundgaard and Lasse Sørensen in the two races at Padborg not far from the Danish-German border shared an Audi RS 3 LMS. In the first session, they took second place and then went on to win race two in the TCR touring car from Audi Sport.