Title successes for Audi customers in Europe and Australia 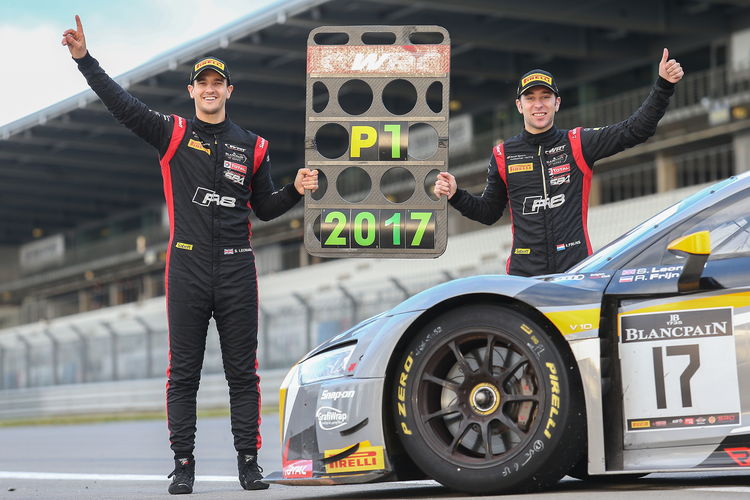 Audi drivers with their customer teams chalked up four title wins in Europe and Australia.

Title win in Blancpain GT Series Sprint Cup: The finale at the Nürburgring was a resounding success for Belgian Audi Club Team WRT and its drivers. Briton Stuart Leonard and Dutchman Robin Frijns in an Audi R8 LMS won the main race and the title in the Blancpain GT Series Sprint Cup in front of their teammates Will Stevens/Markus Winkelhock. With that, Leonard/Frijns have won the title of the sprint racing series for the first time, succeeding Enzo Ide who decided this classification in his favor with Belgian Audi Club Team WRT last year. Team principal Vincent Vosse’s squad has won the sprint team classification in 2014, 2015, 2016 and this year again, as well as the 2013 FIA GT Series that preceded the sprint series. In addition, Robin Frijns was overall Blancpain GT Series Champion with the Belgian outfit in 2015.

Third title success in Australia: Geoff Emery decided the Australian GT Championship in his favor in the finale at Sandown. The Australian from Team Valvoline in an Audi R8 LMS clinched positions one, two and five in the three races. After Australian Mark Eddy (2011) and German Christopher Mies (2015) he is now the third campaigner to have won the title in Australia in an Audi R8 LMS. His teammate, Steven McLaughlan, completed the racing successes with a third place in race two while Duvashen Padayachee/Ash Walsh from Team Supabarn Supermarkets achieved third place in race three.

Victory at finale: Luis Monzón won the finale of the Hill Climb Championship in the Canary Islands. In an Audi R8 LMS ultra of Team Auto Laca Competición, he was 2.851 seconds faster than his best and closest rival at the Subida Fataga in Gran Canaria. Monzón is also the winner of the 2017 Campeonato DISA de Canarias de Montaña.

Title success in Croatia: The driver racing under the assumed name of “Tessitore” achieved third place in the GT class at the finale of the FIA European Hill Climb Championship in Buzetski Dani, which earned him the title in this FIA series. The Austrian race driver relies on an Audi R8 LMS ultra.

Victory at the Sachsenring: Round six of seven in the ADAC GT Masters saw an Audi driver squad mount the top step of the podium. Last year’s Champions Christopher Mies/Connor De Phillippi in an Audi R8 LMS celebrated their second victory this season in round one with Team Montaplast by Land-Motorsport, advancing to third overall in the standings before the final round next weekend at Hockenheim.

Appearance at the IAA: Audi, in addition to its world premieres, presented the Audi R8 LMS race car to the guests of the Volkswagen Group Night at the International Motor Show. Chris Reinke, Head of Audi Sport customer racing, was in Frankfurt together with Christopher Haase. The 29-year-old professional race driver from Audi Sport had won the 24 Hours of Spa in July together with Markus Winkelhock and Jules Gounon. At the Group Night, the Spa-winning Audi R8 LMS GT3 sports car was displayed in its original condition.

Pirelli World Challenge season ends on a positive note: Team Magnus Racing finished the 2017 season with a podium place. At Sonoma, Pierre Kaffer in an Audi R8 LMS of the American team took third place in the finale on Sunday. The German Audi Sport campaigner missed victory by just 1.09 seconds.

Trophies in Australian state: Nick Kelly mounted the podium three times in the CAMS New South Wales Production Sports Car Championship at Sydney. The privateer’s tally reflected second place in the first sprint race, position three in the second one, plus a second place in the endurance race in an Audi R8 LMS.

Skiing aces Max Franz and Benni Raich im Audi Sport TT Cup: At round six of the Audi Sport TT Cup, spectators can look forward to seeing two popular Austrian skiers: Max Franz and Benni Raich will be racing at the Red Bull Ring as guest entrants from September 22 to 24. 39-year-old former ski racer Benjamin Raich from Pitztal in Tyrol is a two-time Olympic gold medalist, three-time World Champion and one-time overall World Cup winner. Max Franz is a member of the national team of the Austrian Ski Association and hails from Weißbriach in Carinthia. He competes in the Downhill and Super-G disciplines, has clinched four podium places – including a victory in Gröden – and won bronze in the Alpine World Ski Championships in St. Moritz. Originally, Marcel Hirscher should have completed a skiing trio in the Audi Sport TT Cup, but the six-time overall World Cup winner and World Champion is unable to race due to an injury.

Title race intensifies: The Audi Sport TT Cup title race between Briton Philip Ellis and Spaniard Mikel Azcona is entering the crucial phase at the Red Bull Ring from September 22 to 24. On clinching two victories at the Nürburgring, the South European most recently converted a 33-point deficit into a three-point advantage. Ellis scored 14 points there, but he’s now the hunter for the first time this year and Mikel Azcona the hunted. 100 points are yet to be award in the Audi Sport TT Cup up until the finale at Hockenheim. Tommaso Mosca has clearly caught up as well. As the best rookie, the Italian is ranked third in the standings, with a 32-point gap to Ellis. He is one of only two campaigners to have scored points at each round to date – just like Fabian Vettel who on taking second place in the most recent round managed the leap onto the podium for the first time. At the Red Bull Ring, Josh Caygill will be returning to the cockpit of an Audi TT cup as well. Last year, the Briton was a regular entrant in the Audi Sport TT Cup and this year is driving an Audi R8 LMS in the Blancpain GT Series.

First victory for Sheldon van der Linde: South African Sheldon van der Linde celebrated his first victory this season in the ADAC TCR Germany at the Sachsenring. He won race one in the Audi RS 3 LMS of Team AC 1927 Mayen e.V. im ADAC with a 5.3-second advantage. Before the finale at Hockenheim he ranks in third place of the table as the best Audi driver while his team, tied on points with another outfit, is in second place of the teams’ standings.

A trophy at the finale in Sweden: In round seven of the TCR Sweden at Mantorp Park, Tobias Brink clinched a trophy for the second time this year. The Swede piloted the Audi RS 3 LMS of Team Brink Motorsport to third place in race two.