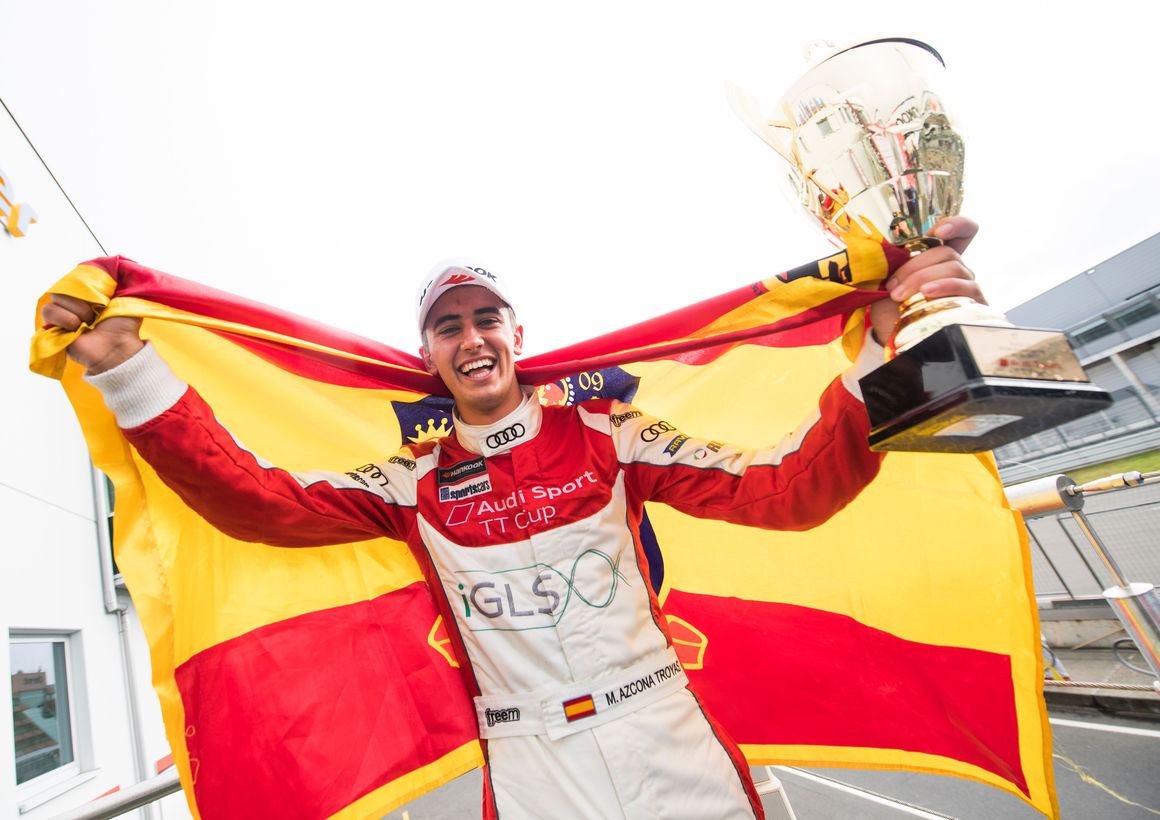 Mikel Azcona has taken the table lead of the Audi Sport TT Cup with a flawless display at the Nürburgring. The 21-year-old Spaniard started from pole twice and won both races. Philip Ellis, who had led the table until now, suffered his first retirement of the season on Saturday, and is now second on the table having finished fifth on Sunday.

The change in fortunes could have hardly been more dramatic for Philip Ellis: within just one race weekend, his 33-point advantage has turned into a three-point deficit. The table lead has changed hands for the first time this season, and thus a particularly exciting sprint for the title in the final two rounds has now commenced. Mikel Azcona has gone from the ‘hunter’ to the ‘hunted’ after five victories in the last six races. Behind the leading duo there has also been a change in the table order. In finishing second on Sunday, rookie Tommaso Mosca from Italy celebrated his third podium result of the 2017 Audi Sport TT Cup. As a result, he has taken Milan Dontje’s place in third in the championship, and now has a 20-point advantage over him after the Dutchman had to retire from Sunday’s race.

There were also some new faces on the podium in the Eifel. The 18-year-old Fabian Vettel from Heppenheim lifted his first trophy with second place in the race on Saturday. The rookie started from second in the wet race and he thrilled the spectators with some bold maneuvers during a duel with Tommaso Mosca. The competitor with the furthest distance to travel to the Eifel was also rewarded for his performance. Drew Ridge from Australia fought his way from tenth on the grid to third on Saturday and thus received his first trophy in the Audi Sport TT Cup. On Sunday, winner Azcona and runner-up Mosca were joined by another new name in third: the 17-year-old Kevin Arnold from Aichelau lifted his first trophy and has thus climbed three positions on the table to twelfth.

The spectators in the Eifel were also enthused by the three guest drivers: autographs from motorcycle racer Marco Melandri, Red Bull Air Race world champion Matthias Dolderer and YouTube star Felix von der Laden were in high demand. The guests also provided several surprises on the race track. Marco Melandri started both races from third on the grid and is thus the best-performing guest driver in qualifying so far this season. On Saturday, the Italian finished in tenth after having spun due to contact with a competitor, whilst on Sunday he retired in the first lap following an incident. Matthias Dolderer drove to 14th and eleventh. Felix von der Laden equaled a best result: after finishing twelfth on Saturday, the 23-year-old hobby-racer went even better on Sunday, crossing the line in tenth. This was the same position in which the until now fastest media representative finished at the opener in Hockenheim.

In just two weeks’ time, the Audi Sport TT Cup turns onto the home straight: the sixth of seven race events will take place from September 22 to 24 on the Red Bull Ring in Austria.