Timo Scheider on the podium again 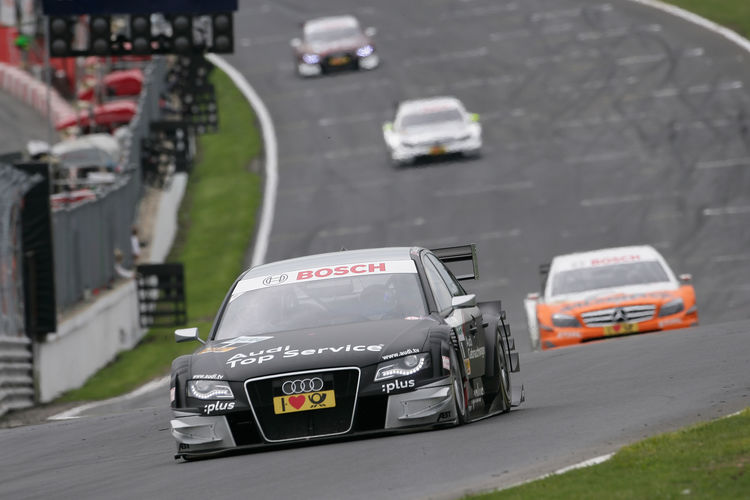 At the DTM race at Brands Hatch (Great Britain) Timo Scheider was again the best Audi driver. The reigning DTM Champion repeated his third-place finish from Zandvoort and advanced to fourth place in the standings.

For 60 laps Timo Scheider followed the leader of the standings, Bruno Spengler, like a shadow. But the Audi driver had no opportunity to overtake the Canadian. After the second pit stop Scheider lost a bit of ground and in the final phase concentrated on securing his third place.

“In the beginning Bruno (Spengler) wasn’t that quick, so Paul (Di Resta) was able to move away at the front,” said the two-time DTM Champion after the race. “But on used tires Bruno was very fast in the end. It’s nice to see my performance curve continue to point upward – although, obviously, we’re here to win races.”

In the standings Scheider moved past Mattias Ekström who scored no points at Brands Hatch. With a good start the Swede pushed past Ralf Schumacher but was touched on the left rear wheel by the former Formula 1 driver in turn 1 and forced to retire as early as on the second lap due to the incident.

“Obviously, what happened to ‘Eki’ on the first lap was really bad for us with respect to the championship,” said Head of Audi Motorsport Dr. Wolfgang Ullrich. “As a result, our driver with the best points score up to then was unable to clinch any points. That’s frustrating. Timo (Scheider) showed a very good performance. And I was very pleased with Miguel Molina’s race as well.”

The young Spaniard in the 2008-specification Audi A4 DTM fielded by Audi Sport Rookie Team Abt was the fastest driver in the whole field. The 21-year-old pushed forward from ninth to fourth place and set a new track record of 41.896 seconds. With late pit stops Molina was even able to bump Zandvoort winner Gary Paffett from fourth place in the final phase. After 98 laps the rookie missed the first podium in his young DTM career by merely 0.461 seconds.

With Oliver Jarvis, Martin Tomczyk and Alexandre Prémat in places six, seven and eight, a total of five Audi drivers scored points at Brands Hatch. Mike Rockenfeller pushed forward to ninth place after having started from 13th on the grid.

Whereas Katherine Legge finished in 14th place her team colleague Markus Winkelhock’s streak of misfortune continued: the German had to park his Audi A4 DTM shortly before the race ended due to a suspension defect after having run through the gravel trap in the fast Paddock Hill Bend.

Four races before the end of the season Timo Scheider and Mattias Ekström with gaps of 23 and 24 points, respectively, are ranking in fourth and fifth place of the standings. “This means that the championship has not been decided yet,” said Dr. Wolfgang Ullrich. “We’re looking ahead.”

Just 14 days from now the next race at the Motorsportarena Oschersleben will be on the calendar. The winner of both of the two most recent races held at the East German circuit was Timo Scheider.