Skip to content
We are using cookies for a better user experience.
04/23/19
Neuburg a. d. Donau
Sport

Three victories of the Audi R8 LMS in Thailand and Australia 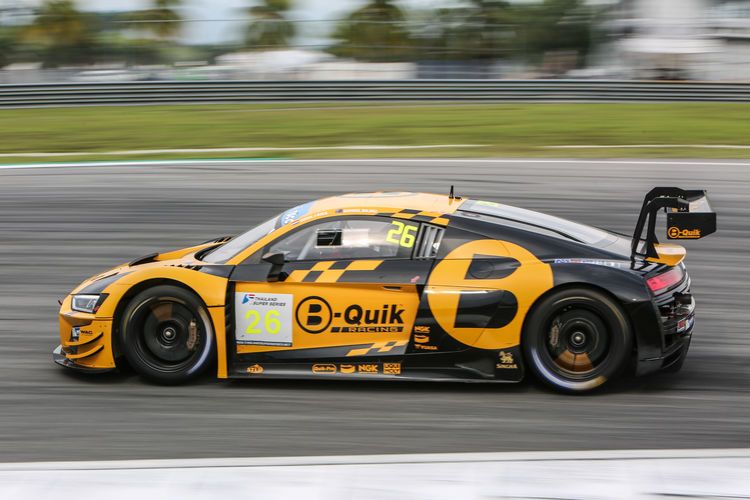 The Audi R8 LMS was unbeaten on three occasions during the Easter weekend: in Thailand, the Audi Sport customer team B-Quik Racing achieved its first victory this season while two Australian Audi teams won on the race track at Bathurst.

First victory for the new Audi R8 LMS in Thailand: For B-Quik Racing, the year of 2019 in the Thailand Super Series began with a victory. Dutchman Henk Kiks, who resides in Thailand and has been a customer of Audi Sport customer racing since 2014, started to the new season with the evolution version of the Audi R8 LMS. In the season opener at the circuit of Sepang in neighboring Malaysia, he won the second race together with his Australian teammate Daniel Bilski. The team had started from fourth on the grid, dropped to seventh position, continually fought back, took the lead on the 15th of 26 race laps and eventually won the race, with a clear advantage of 8.9 seconds. Third place went to Sandy Stuvik/Shaun Thong in an Audi R8 LMS ultra. In the first race, the team with Sandy Stuvik/Shaun Thong had finished runner-up, trailed by Daniel Bilski/Henk Kiks.

Two victories at Bathurst: In the Australian club sport CUE Enduro Super Series, Audi Sport’s customer teams celebrated two victories. Gary Higgon/Luke Youlden won in an Audi R8 LMS of Team KFC with a 26-second advantage ahead of Yasser Shahin in another Audi R8 LMS. In the second race on the legendary track at Mount Panorama, Yasser Shahin with The Bend Motorsport Park team after one hour of racing scored victory by a narrow margin of 0.8 seconds.

Podium finish at Spa: Following a fightback in round three of the 24H Series, Phoenix Racing achieved a podium finish. In the Spa 12 Hours, Ernst Moser’s team was initially in contention at the front of the field but dropped out of the group of the best 20 teams due to a puncture. However, Audi Sport driver Frank Stippler, Vincent Kolb, Kim-Luis Schramm and the Spaniard Ivan Pareras in an Audi R8 LMS subsequently fought back to finish third.

Strong opener: The long-standing Audi Sport customer team Saintéloc Racing at the beginning of the 2019 season in the GT4 France continued its impressive performances of the previous year. On the circuit at Nogaro in the southwest of France, the title defenders Gregory Guilvert/Fabien Michal in an Audi R8 LMS GT4 finished both races in second position. In addition, both drivers had set a best time in qualifying. With 44 entrants, the French series in 2019 remains the national GT4 series in Europe with the largest field. Both rounds were also included in the new GT4 South European Series. In this classification, Guilvert/Michal won both competitions.

Ready for Hungary: The four Audi Sport drivers Niels Langeveld, Gordon Shedden, Jean-Karl Vernay and Frédéric Vervisch will compete in the second round of the WTCR – FIA World Touring Car Cup from April 26 to 28. At the Hungaroring near Budapest, they plan to pick up where they left off in the successful Marrakesh opener. Frédéric Vervisch from Comtoyou Team Audi Sport clinched his first pole position and a runner-up finish there. In fifth place, he is currently the best driver of an Audi RS 3 LMS in the standings. Jean-Karl Vernay from Leopard Racing Team Audi Sport achieved a second place in Morocco as well. His teammate, Gordon Shedden, was the only Audi Sport driver to score points in all three races of the opening event. For new signing Niels Langeveld from Comtoyou Team Audi Sport, Morocco was new ground to be broken whereas he is familiar with the Hungaroring from previous races.

Second place in Russia: The new season in the TCR Russia started with a podium finish for the Audi RS 3 LMS on the circuit at Fort Grozny. Alexey Dudukalo, last year’s runner-up in the championship, started from pole position but a rival managed a better start and overtook him in the first turn. Dudukalo went on to defend second position for the Lukoil Racing Team, scored 21 points and, as a result, is ranked in fourth place of the standings. With seven RS 3 LMS cars in the field of 24 entrants, Audi Sport is heavily represented again in the TCR Russia in 2019.

Trophy as a reward: For Team AC Motorsport, the third race weekend of the 24H Series had started with a setback. An accident during the private test for the Spa 12 Hours on Thursday required an overnight repair of the front end of the Audi RS 3 LMS. Subsequently, Stéphane Perrin, Vincent Radermecker and James Kaye took third place in the TCR category of the endurance race which, with nine entrants, was well-filled.