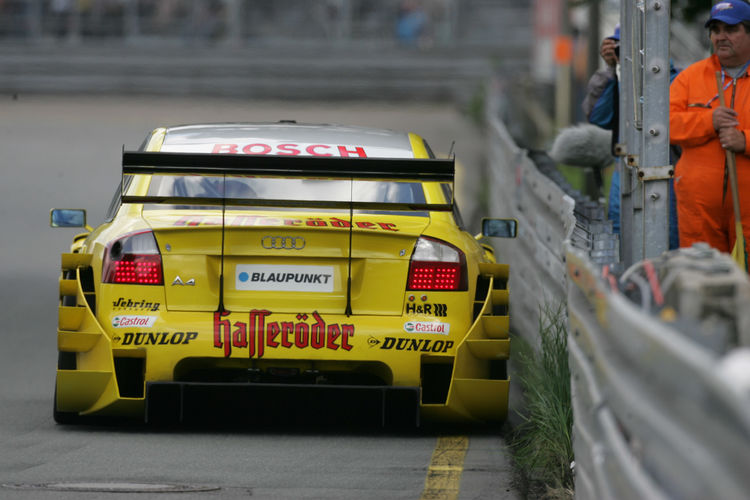 In the qualifying session for the DTM race at the Norisring three Audi drivers finished among the top ten. Tom Kristensen, Christian Abt and Mattias Ekström in their Audi A4 DTM cars qualified on Saturday for the single timed lap of the ten best-placed drivers. The quickest Audi driver in the so-called “super pole” qualifying was the Dane Tom Kristensen, who finished sixth. Christian Abt and Mattias Ekström were struck by bad luck: the German had to repeat his super pole lap due to yellow flags in the final corner and did not achieve the same speed in his second attempt. Leader of the standings Mattias Ekström was slowed down by a tyre puncture and will be starting from position nine on Sunday. Martin Tomczyk, Emanuele Pirro and Frank Biela will be starting from positions 13, 17 and 19. The race will start at 2 p.m. local time on Sunday.

Tom Kristensen (Audi Sport Team Abt Sportsline / Audi A4 DTM #12)
6th place, “Super Pole“, 49.060s
“Because the circuit is so short, it’s very difficult to get the brakes and tyres up to the right temperature in a single lap. My super pole lap was not perfect. Particularly in the S-corner I lost a lot of time, because the front tyres didn’t have enough grip yet. At least, though, I ended up where I always like to be: among the top ten. The race is very long, and we know that across the distance we’re better than in a single lap.”

Christian Abt (Audi Sport Team Abt Sportsline / Audi A4 DTM #11)
8th place,”Super Pole“, 49.511s
“My first super pole lap was really good. Due to the yellow flags in the final corner, I took my foot off the throttle, though. I then had to return for my second try so quickly that there wasn’t enough time to pre-heat the tyres properly. That’s why nothing worked, and that was too bad, really, because I could have easily clinched fifth place.”

Mattias Ekström (Audi Sport Team Abt / Audi A4 DTM #5)
9th place, ”Super Pole“, 49.524s
“In the qualifying session, I slightly touched the wall and the door on the right opened. In the super pole lap, I was slowed down by a puncture. Though pole wouldn’t have been in it for me under the circumstances, a place among the top five certainly would have. Now, we’re going to work hard on coming up with a good setup for the race, because we’re not about to make things easy for our rivals.”

Martin Tomczyk (Audi Sport Team Abt / Audi A4 DTM #6)
13th place 49.047s
“After the first free practice session, things had actually been looking pretty good for me. Yet I was fully aware of the fact that you also need a little luck to qualify for the super pole. I simply didn’t have this kind of luck, which confirms to me, once more, that the Norisring just isn’t my circuit. The line-up of the Audi contenders on the grid is pretty close, and we’ll be giving our level best to move forward in the race.”

Emanuele Pirro (Audi Sport Infineon Team Joest / Audi A4 DTM #44)
17th place, 49.334s
“We tried a lot of different things, which didn’t work out. This morning, I was still not satisfied with the setup. For the qualifying, we changed a few more things, and now we at least seem to be headed in the right direction. At this point, I’m a bit more optimistic about the race.“

Frank Biela (Audi Sport Infineon Team Joest / Audi A4 DTM #45)
19th place, 49.383s
“After the first free practice session, I’d had my hopes up that the qualifying would go halfway well for me. But it’s so difficult here to heat up your tyres – and you’ve only got nine laps. How others manage to work the ‘time miracle’ over such a short distance really escapes me.”

Hans-Jürgen Abt (Team Director Audi Sport Team Abt Sportsline): “Our team performance, yet again, was very good. We’ve managed to get three cars into the top ten. That’s a very good base for contesting the race. 72 laps at the Norisring are very long. That Mattias suffered a setback from a puncture was really too bad. But, if given the choice, I’d rather see this happening in the qualifying session than in the race.“

Ralf Jüttner (Technical Director Audi Sport Infineon Team Joest): “This has really been a very difficult weekend for us so far. The past two days, our crew worked on both cars late into the night. We’ve tried a lot of different things, and now it looks at least as though Emanuele is getting along better. We know that he’s always good in the race. What shall I say, we’ll simply have to attack the field from the rear.”

Dr Wolfgang Ullrich (Head of Audi Motorsport): “Today has clearly shown that there’s no such thing as a home advantage in the DTM. We knew that the Norisring is a difficult track for us. Nevertheless, we’re somewhat disappointed by the qualifying result, particularly since things weren’t looking all that bad after the free practice session in the morning. Now, we’ll leave no stone unturned to make the best of the situation in the race.”