Skip to content
We are using cookies for a better user experience.
04/29/19
Neuburg a. d. Donau
Sport

The moment of truth for the new Audi RS 5 DTM 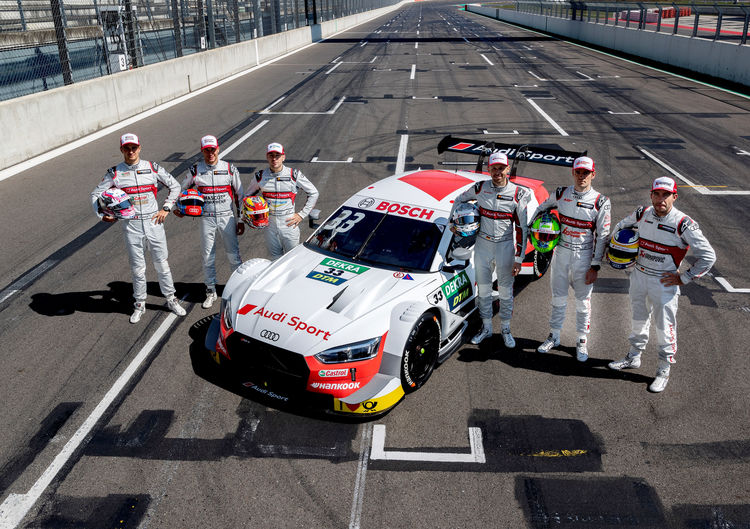 Fans and drivers have been looking forward to this moment with equally eager anticipation: On Saturday (May 4) at 1.30 PM, the new turbo era of the DTM begins at the Hockenheimring.

With eight cars, Audi is the strongest brand in the field in terms of numbers. During the final pre-season tests at the Lausitzring, the new Audi RS 5 DTM with its more than 610-hp two-liter four-cylinder turbo engine was the fastest car. Even so, nobody ventures a prediction before the first 2019 DTM race.

“No-one knows where they stand,” says Head of Audi Motorsport Dieter Gass. “Qualifying on Saturday will provide an initial indication. But even then we won’t know who will be the best over the racing distance. More than ever before in the DTM, tire management and the driver will be crucial in the race.”

The new turbo engines deliver some 100 horsepower more than the previous naturally aspirated V8 engines – resulting in clearly higher loads acting on the tires that have remained unchanged compared to last year. At the same time, the number of tire sets per car and race weekend has been reduced from eight to seven. For the two qualifying sessions and the two races, only five tire sets are now available.

These are not the only changes in the 2019 DTM. By means of the “Push-to-Pass” system a short-term 30-hp boost can be accessed for overtaking maneuvers in the race. In addition, the drivers have to get used to the modified aerodynamics of the Class 1 race cars whose most conspicuous characteristic is a much wider rear wing. With the new turbo engines, the standing start will be significantly more difficult, especially since the parking brake has been banned and it is not so easy anymore finding the ideal point for preloading the clutch.

“The first race of the season is always special,” says Mike Rockenfeller, who has been an Audi driver in the DTM since 2007. “With the turbo engines and the many other new things we have in the car, the racing will be even more exciting this year. I’m really looking forward to it.”

For the seasoned race driver, the 4.574-kilometer circuit is the best DTM track on the calendar. “It’s no coincidence that we’ve been seeing the most thrilling DTM races at Hockenheim in recent years. The track layout is perfect for overtaking maneuvers. An absolute highlight for me was Sunday’s race at last year’s season opener when I fought to the front from midfield. The duels were simply fantastic.”

With the long Parabolika and the subsequent hairpin turn, the Hockenheimring features one of the most spectacular sections of the entire DTM season. With DRS, a top speed of some 280 km/h is expected there. Speed in the following right-hand turn is less than 60 km/h. “You’ve got to slow the car down nearly to stopping,” says Rockenfeller. “That in itself is tricky and due to the large run-off areas, everyone will take a full risk.”

For Rockenfeller, the greatest challenge is the first turn after the start and finish, which is driven at a speed of about 190 km/h. “Especially in qualifying, you’ve got to get everything right there or else you’ll easily lose two or three tenths of a second,” says the Audi driver.

The first of the two DTM races at the Hockenheimring will be the 300th with Audi’s participation since the series was incepted in 1984. WRT Team Audi Sport’s entry marks the first of an Audi customer team in the DTM again since 2009. The two WRT youngsters Jonathan Aberdein (21) and Pietro Fittipaldi (22) form the youngest driver pairing. The driver lineups of the factory teams have remained unchanged: Robin Frijns and Nico Müller compete for Audi Sport Team Abt Sportsline, Mike Rockenfeller and Loïc Duval for Audi Sport Team Phoenix, and Jamie Green and René Rast, who has been unbeaten in the DTM for six races straight, for Audi Sport Team Rosberg.

The Audi Thrill Zone is making its debut at the DTM this weekend as well. The new hub in the DTM Fan Village offers virtual races, make-up and hair stylists especially for female visitors, a graffiti artist, autograph sessions, interviews and many other fan activities.