The Audi teams in the DTM: Abt and Joest – successful for years with Audi 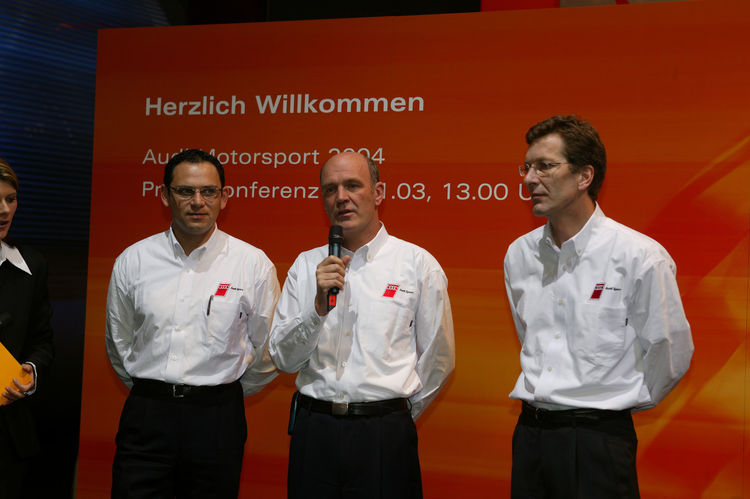 The development of the new Audi A4 DTM rests in the proven hands of the almost 150-head team from Audi Sport, who have guaranteed for more than twenty years that Audi races from win to win in motorsport. Equally, the Audi policy to form alliances with strong teams has paid dividends in the past. Therefore, the two teams that have celebrated their greatest successes with Audi during the last few years will assume responsibility for running the six Audi A4 race cars in the 2004 DTM (German Touring Car Masters): Abt Sportsline und Joest Racing.

Both teams were originally family companies that have developed their respective fields of specialisation to highly professional enterprises. Abt Sportsline, 1999 German Super Touring Car Champions and winner of the 2002 DTM, have relied on touring cars from the Audi marque for a decade. Hans-Jürgen and Christian Abt today manage Abt Sportsline GmbH in Kempten. “We are proud that Abt Sportsline has received Audi works team status,” says Team Director Hans-Jürgen Abt. “In 2000 we had the courage to get involved in the DTM. We know today that it was worth while.”

Joest Racing GmbH is a partner of Audi since 1998. The team of company founder Reinhold Joest, the man lending his name to the company, is regarded as the world’s best sportscar team, and was involved in the Audi R8 programme from the onset. Audi and Joest won the 24 Hours of Le Mans three times in succession, Joest even triumphed four times in a row in the American Le Mans Series (ALMS). The DTM is however, no new territory for the team: In 1996, Joest won the ITC, the international counterpart to the DTM. “After so many years in the America, we are really very happy to be able to race in Germany again,” explains Ralf Jüttner, Technical and Managing Director of Joest Racing. “As a race team, one cannot wish for a better partner than Audi.”

Head of Audi Sport Dr Wolfgang Ullrich knows that his six Audi A4 DTM cars are in capable hands during the 2004 season: “Abt and Joest are without doubt very different teams, but both extremely successful. I am convinced that Abt and Joest will be a strong combination in the DTM.”

On board again are the well-proven partners of the teams: Two Abt cars will race in the yellow design of main sponsor Hasseröder, the two other A4 cars in the blue outfit of Red Bull and Playstation2. The two silver and red painted limousines of Team Joest are supported by longstanding Audi partner Infineon Technologies and carry the “S line” trademark for the sport packages of quattro GmbH, a wholly owned subsidiary of AUDI AG.