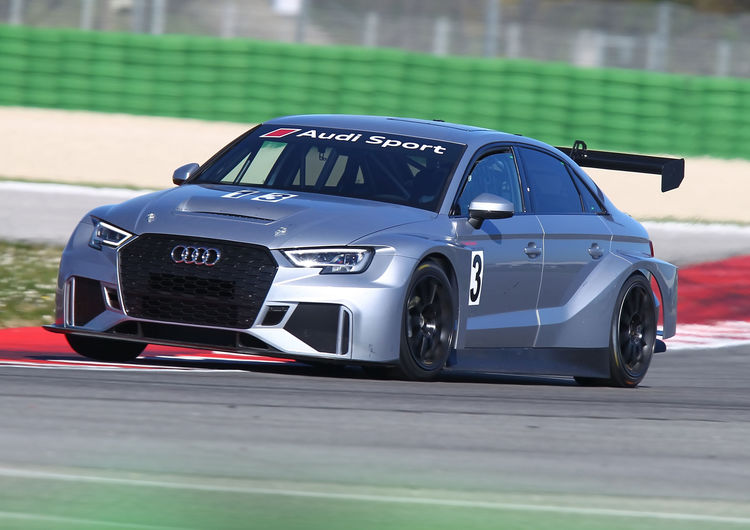 The new Audi RS 3 LMS stands in front of its first motorsport season. The race car can compete in 14 series worldwide, including the TCR International Series and ADAC TCR Germany with its strong field. The title defender of the TCR International Series, Stefano Comini, will drive an Audi from 2017 on. Also in the ADAC TCR Germany, the Audi RS 3 LMS has earned special preference: The reigning champion team, Target Competition, ordered four cars.

The champion of the TCR International Series in its first two seasons (2015 and 2016), Stefano Comini, will compete with an Audi RS 3 LMS in the 2017 season. The Swiss driver will be racing with the number one on the side of his car for Comtoyou Racing from Belgium. The season will begin at Rustavi in Georgia on April 1, after which several of the national TCR series will get underway worldwide, among others: Belgium, Italy, Russia, Portugal, Spain and Scandinavia.

The ADAC TCR Germany gets underway at Oschersleben on April 28, and it includes seven race weekends this year. Entering this series with Audi from 2017 on, among others, is Target Competition: Last year, the team from Andrian near Bolzano in South Tyrol won the drivers’ and teams’ titles in the German series, and the year before that, they were victorious in the drivers’ and teams’ classification of the TCR International Series, the most important TCR series in the world. “We are proud that the successful team of Andreas and Markus Gummerer will now defend their titles with Audi,” says Chris Reinke, Head of Audi Sport customer racing. “In Germany and around the world, we have sold a total of 90 Audi RS 3 LMS cars to our customers. We all wish all of them the best.” Currently, the ADAC TCR Germany entry list includes 41 entries, including 15 Audi RS 3 LMS cars. In addition to Target Competition, the list of teams also running Audi RS 3 LMS cars includes: Racing One, Prosport Performance, LMS Racing, the Certainty Racing Team, Steibel Motorsport and German Flavours Racing.

However, the Audi RS 3 LMS is not only intended for sprint racing within the national or regional TCR series in Europe and Asia. The up to 350-HP-strong race car has already proven its quality in the first endurance races of the season. In January, the Cadspeed Racing with Atech team won the TCR class of the Dubai 24 Hours, and in March, Bonk Motorsport won the TCR class of the Mugello 12 Hours on its first attempt. The Audi RS 3 LMS will also take part in Germany’s biggest endurance race from May 25 to 28, the Nürburgring 24 Hours.