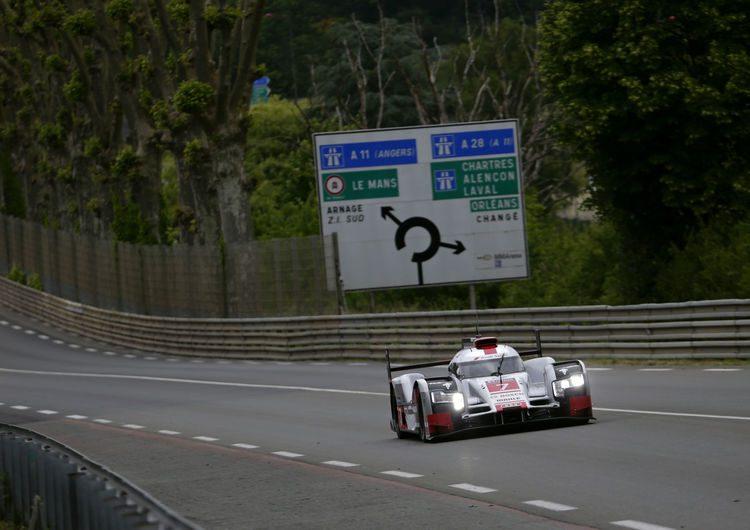 Audi is set on continuing its string of victories in the world’s toughest endurance race on 13th and 14th June. Five times in succession, the sports cars with the four rings have won the iconic race since 2010. Audi is now battling for an amazing 14th victory in the Le Mans 24 Hours in the past 16 years. The efficiency technology Audi ultra is a major element of the Audi R18 e-tron quattro hybrid sports car’s overall concept this year.

The iconic race has been held in the ‘Départment Sarthe’ in western France since 1923, but there is a lot more to it than history. The race also enjoys worldwide prestige because it is unrivaled by any other motorsport competition in terms of combining tradition and progress. Le Mans is the toughest test bed for Audi’s technologies. In 2006, the brand was the first manufacturer ever to have won the race with diesel power. The first winner with hybrid drive had the four rings emblazoned on the hood as well – in the 2012 season. Audi’s diesel-electric powertrain has been unbeaten at Le Mans to this day, plus it is the most economical one at the moment: none of the four manufacturers in the LMP1 category consumes as little fuel energy as Audi does.

“This efficiency perfectly matches the ‘More from less’ formula which is Audi ultra’s take-home message,” says Head of Audi Motorsport Dr. Wolfgang Ullrich. The ACO, FIA and WEC officials managed to create a set of regulations that enables a thrilling contest between various efficiency concepts.” The advantages provided by Audi’s efficiency technology in racing are made visible in direct competition, as four manufacturers are competing with four different concepts – from the type of combustion technology used, to the engine’s configuration in the race car, to the extent and type of energy recuperation and storage. No other automobile world championship features an equally diverse range of technology.

“This is what makes Le Mans and the FIA World Endurance Championship (WEC) so attractive, so the resulting challenges are equally great,” says Chris Reinke, Head of LMP at Audi Sport.

The season so far has shown: Audi’s engineers have risen to these challenges. Marcel Fässler (CH), André Lotterer (D) and Benoît Tréluyer (F) won the first two races of the season at Silverstone (GB) and at Spa-Francorchamps (B). They are traveling to Le Mans as the leaders of the standings. At Spa, the new Audi R18 e-tron quattro was seven seconds faster in qualifying and four in the race than last year – in spite of now having to consume 2.8 percent less fuel. Its updated V6 TDI engine, the hybrid system delivering twice its previous output and the overall concept that has particularly been optimized with respect to aerodynamics prove the capabilities of the ‘ultra’ principle.

In addition to its technological fortes, Audi can rely on extraordinary team performances and the passion of its professional drivers. Fässler, Lotterer and Tréluyer have jointly won the Le Mans 24 Hours three times in the past four years for Audi and are competing in car number ‘7.’ Loïc Duval (F), who is sharing number ‘8’ with Oliver Jarvis (GB) and Lucas di Grassi (BR), won the iconic event two years ago. Filipe Albuquerque (P), Marco Bonanomi (I) and newcomer René Rast (D) are tackling the race in car number ‘9.’ The squad that Audi, as in the years before, is again relying on is the most successful Le Mans team of all time: Audi Sport Team Joest. Reinhold Joest’s outfit has won the 24-hour race an amazing 15 times.

Many observers are expecting an extremely thrilling edition of the endurance classic. The race will start on Saturday, June 13, at 15.00. The TV channel Eurosport will be airing live coverage of the 83rd running of this classic event.