Special DTM weekend for Audi Sport at the Nürburgring 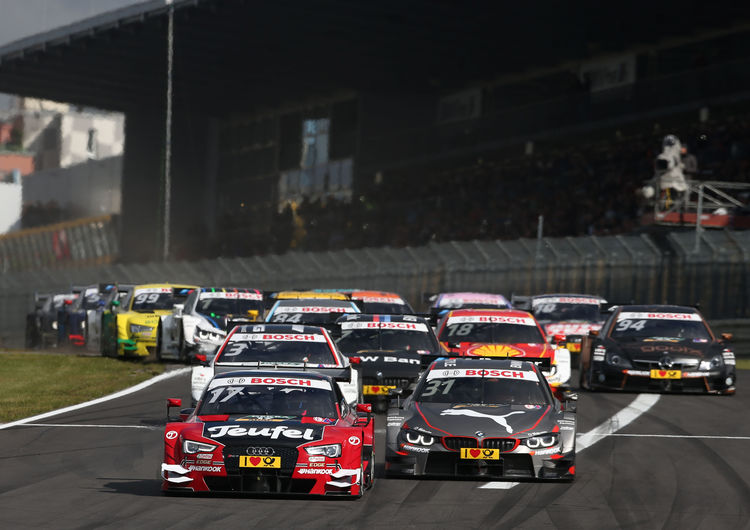 From September 9 to 11, the DTM will visit the Nürburgring for the 50th time. Audi Sport has a special history in the DTM on the famous race track in the Eifel as well. Be it the V8, TT, A4 or A5: with every model range Audi has been active in the DTM so far the brand with the four rings has celebrated victories at the Nürburgring – a total of nine to date. The first one was achieved in 1990 by two-time World Rally Champion Walter Röhrl (Germany) in the legendary Audi V8 quattro.

In 2001, the Frenchman Laurent Aiello clinched the first DTM success of the compact Audi TT at the Nürburgring. At the same time, this marked the first DTM triumph of today’s Audi Sport Team Abt Sportsline that could be celebrating its 50th victory in a DTM race this weekend. The most recent Audi victory at the Nürburgring was achieved a year ago by Miguel Molina. The Spaniard in his Teufel Audi RS 5 DTM also holds the track record on the 3.629-kilometer sprint circuit used by the DTM (1m 21.732s).

This is another reason why, following the difficult weekend at Moscow, the Audi squad is traveling to the Eifel with confidence. “We intend to come back with renewed strength,” says Dieter Gass, Head of DTM at Audi Sport. “The championship race is intensifying. Everything is still open, and our aims are unchanged. We’re expecting a balanced field at the Nürburgring. And, obviously, we have to be prepared for anything in terms of weather there.”

The question of why things were not going according to plan for Audi on the most recent race weekend at Moscow has been resolved. “The Moscow analysis has confirmed our original assumption that we didn’t get the tires to work in qualifying,” says Dieter Gass. “We’ve come up with corrective actions.”

Jamie Green, trailing leader of the standings Marco Wittmann (BMW) and Robert Wickens (Mercedes-Benz) in position three, is currently the best Audi campaigner in the drivers’ standings in terms of points. “I’ve never won in the DTM at the Nürburgring before,” says the Briton from Audi Sport Team Rosberg. “I’d like to change that and I think we’ve got good chances of making that happen. Our car should be competitive at the Nürburgring. Following the disappointment at Moscow, we need to regain our form and score as many points as possible.”

At the end of the summer break, the Briton returned to Monaco, his adopted home, from a family vacation in England and is equally motivated as Edoardo Mortara (Audi Sport Team Abt Sportsline) who is trailing Green by only four points in the drivers’ classification. “I’m very much looking forward to the Nürburgring,” says the Audi driver. “It’s one of my favorite tracks on the DTM calendar. I had many good results there in the past and have been on podium several times. I feel comfortable on the track and am confident that we’re going to deliver a good race. We’ve still got title chances – it’s make or break now.”

The Nürburgring weekend is a home round for Audi Sport Team Phoenix with its two former DTM Champions Timo Scheider and Mike Rockenfeller. The latter had the opportunity to drive his Schaeffler Audi RS 5 DTM from the team’s base in Meuspath to the track on public roads for a film shot before the Nürburgring race. “That was cool,” says “Rocky.” His drive can be watched at www.sportschau.de.

As usual, ARD will be airing live coverage of both races on “Das Erste,” of race one on Saturday (September 10) starting at 14:30 CEST and of race two on Sunday (September 11) starting at approximately 15:00. Live onboard footage of both races will be available at www.audi-motorsport.com and live streaming from various perspectives at www.dtm.com/live. The Audi Sport TT Cup will be part of the program at the Nürburgring again as well.