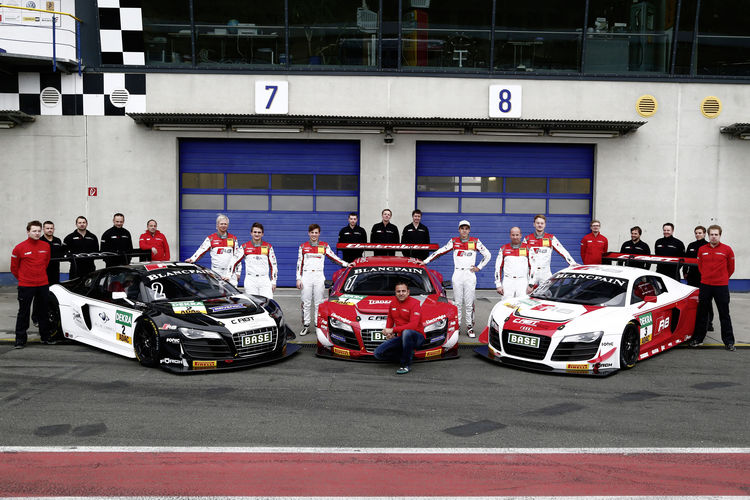 With a field made up of eight automotive brands, the ADAC GT Masters is one of the world’s strongest national GT3 championships. This weekend, the new season of the high-caliber GT racing series will open at Oschersleben. Four customer teams will be putting a total of seven Audi R8 LMS ultra cars on the grid – no other manufacturer has as many cars in the field as Audi.

The title winner is returning: Kelvin van der Linde, who in 2014 immediately won the ADAC GT Masters drivers’ championship, is staying with the privateer team C. Abt Racing in the new season. After his previous team-mate René Rast has switched to Audi’s WEC driver squad, the 18-year-old South African is now sharing a cockpit with a young Bavarian talent: 19-year-old Stefan Wackerbauer from Landshut. Wackerbauer is set on showing that he deserves sitting in car number ‘1.’”

“Kelvin’s title win has made him even stronger and Stefan has greatly impressed me with his on-track performances as well,” says Team Director Christian Abt, who won the title in the series himself in 2009. “Thanks to the support of our partners we’re fielding two more Audi R8 LMS ultra cars with good driver pairings. Cars number ‘1,’ ‘2’ and ‘3’ are the dream of any team boss, as well as a serious commitment. It’s a tough competition.”

kfzteile24 MS Racing Team from Waldshut-Tiengen is fielding two GT3 sports cars with the four rings. The squad of Team Director Harald Böttner was the 2012 winner of the ADAC GT Masters and is now relying on Audi for the third consecutive time. Regular driver Florian Stoll is sharing the cockpit with former GT1 World Champion Marc Basseng; Daniel Dobitsch from Austria is competing together with the Swede Edward Sandström in the sister car.

Two other teams are each fielding an Audi R8 LMS ultra. Like last year, Team Yaco Racing from Plauen headed by Team Director Uwe Geipel relies on the driver pairing Philip Geipel and Rahel Frey. Dupré Engineering Motorsport from Schiffweiler is contesting its first full season in the ADAC GT Masters. The team of Claus Dupré based in the Saarland looks back on a decade-long association with Audi in customer racing.

“Anyone who prevails in the ADAC GT Masters can stand their ground in international series as well,” says Romolo Liebchen, Head of Audi Sport customer racing. “The series is now being held for the ninth consecutive year. 25 entrants from eight marques contest the events, delivering thrilling racing in Germany, Austria, Belgium and the Netherlands. The races will again be covered live on TV, which causes the fan community to steadily grow. We’re proud that so many customers opt for the Audi R8 LMS ultra. In the fierce on-track competition, our customers can depend on our presence with service vehicles and points of contact at all races and receiving optimum support from us.”

The Audi customer teams in the 2015 ADAC GT Masters