Skip to content
We are using cookies for a better user experience.
07/15/19
Neuburg a. d. Donau
Motorsport 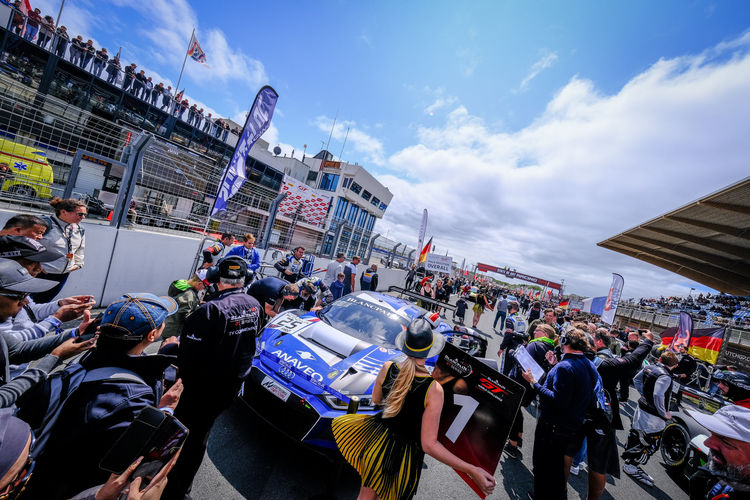 Audi Sport customer racing has every reason to celebrate in the middle of July: The Audi R8 LMS GT3 drove to an important victory in Europe and is also the car that the leaders of the standings in Australia rely on. On the same continent, the Audi RS 3 LMS also scored its first victory, while Phoenix Racing clinched its first success this year with the Audi R8 LMS GT4.

First victory this season for Saintéloc Racing: The sixth race of the Blancpain GT World Challenge Europe at Zandvoort saw a different winning team for the sixth time. In Sunday’s race in the Netherlands, the Saintéloc Racing customer team celebrated its first victory with the Audi R8 LMS this year. Audi Sport driver Christopher Haase had built a twelve-second advantage in the first half of the race on the dune circuit by the time he turned over the car to privateer Simon Gachet. The Frenchman defended the lead against the vehement attacks by his closest rival Mirko Bortolotti and maintained an advantage of 9.9 seconds. Third position went to Ezequiel Perez Companc, who was sharing the Audi R8 LMS of Belgian Audi Club Team WRT with Audi Sport driver Dries Vanthoor. With another Audi of the Belgian team in fifth position and the cars of Attempto Racing and Phoenix Racing in ninth and tenth, a total of five Audi R8 LMS cars finished in the top ten at Zandvoort.

Lead of the standings defended: Geoff Emery with Team Valvoline only needed a second-place finish in the Australian GT Championship to remain the championship leader. In the fourth of seven races this season at The Bend Motorsport Park in southern Australia, last year’s champion started from sixth on the grid in drizzling rain before handing his Audi R8 LMS over to Garth Tander. The pro started a fightback in the second half of the 3-hour race and at times was one second faster per lap than the front runner. At the finish, he had to admit defeat as the runner-up by merely 15 seconds. As a result, Emery remains the leader in the overall championship standings with a 127-point advantage over his closest rival, Max Twigg. Garth Tander sits in the fourth spot. The endurance classification of the series is jointly led by Emery and Tander with a 111-point advantage after two of three rounds.

DTM driver to complete lineup: Jamie Green is the fourth Audi factory driver from the DTM to compete in the Spa 24 Hours from July 25 to 28 in an Audi R8 LMS. He will share the cockpit in Team Montaplast by Land-Motorsport with Audi Sport driver Christopher Mies and the Swiss Ricardo Feller. The Briton replaces José María López, who had originally planned to contest the event. The Argentinian tested the Audi R8 LMS in July for the first time but afterwards jointly decided with Audi Sport to cancel his participation because he did not feel optimally prepared for this 24-hour race in a race car that was new for him. “We would be pleased to work with José María López in a customer racing project with an appropriate preparation phase at a later point in time,” said Chris Reinke, Head of Audi Sport customer racing.

First victory this season for Phoenix Racing: Title defender Phoenix Racing clinched its first victory this year with the Audi R8 LMS GT4 in round five of the GT4 European Series. Last year’s champion Nicolaj Møller Madsen from Denmark and his Swiss teammate Cédric Freiburghaus won the first race at Zandvoort with an advantage of 6.158 seconds.

Position two in America: In round four of the Pirelli GT4 America West racing series, Team Rearden Racing achieved a podium finish with the Audi R8 LMS GT4. As the best team in the Am classification, Jeff Burton/Vesko Kozarov finished the second race runners-up. As a result, Rearden Racing is the second-best of ten squads in the teams’ classification while Burton/Kozarov are leading the Am drivers’ standings.

Podium in the Eifel: Team Giti Tire Motorsport by WS Racing in round four of the VLN Endurance Championship Nürburgring took second place in its class. Thomas Leyherr/Bernd Hoemberg/Hendrik Still shared an Audi R8 LMS GT4 in the SP8 class.

First victory for the Audi RS 3 LMS in Australia: On the third race weekend of the new TCR Australia racing series, Garth Tander achieved a breakthrough. The touring car pro won the first race at The Bend Motorsport Park with a one-second advantage, marking the first victory of the Audi RS 3 LMS on the fifth continent. In difficult conditions with rain at the beginning and end of the race, Tander temporarily dropped to fourth position following a half-spin, but fought back to the top spot. With two second places in the other two heats, the Australian rounded out a successful weekend on which he netted a total of 122 points as the highest point score of all drivers. As a result, his team, Melbourne Performance Centre, also won the Wolfchester Team Award for this event.

Most successful weekend for the Audi RS 3 LMS in Scandinavia: With two victories, the Swedish Brink Motorsport team celebrated its so far best weekend with Audi in the TCR Scandinavia. At Falkenberg, Tobias Brink won the first race after the original winner, Robert Dahlgren, was retrospectively handed a penalty. Brink’s teammate, Andreas Wernersson, from pole position in race two scored his third victory this season. As a result, the Audi privateer in second position is separated from leader of the standings Dahlgren by only nine points, while Brink Motorsport has enlarged its advantage in the teams’ classification to 19 points.

Class victory at the Nürburgring: Team Bonk Motorsport in the fourth race of the VLN Endurance Championship Nürburgring scored its first class win this season with the Audi RS 3 LMS. Michael Bonk and Hermann Bock prevailed against six other competitors in the SP3T class and after 22 race laps on the Nordschleife had a 23.6-second advantage.

Victory in Italy: In round five of the Coppa Italia Turismo, the BF Motorsport team claimed victory in the first race. Up-and-coming driver Jacopo Guidetti won the twelve-lap heat at Misano with a 2.4-second advantage in an Audi RS 3 LMS.

Third place at Zandvoort: Team Bas Koeten Racing scored a podium finish with the Audi RS 3 LMS on the fourth race weekend of the Supercar Challenge. In the second race, Oscar Gräper achieved third place in his S1 class at Zandvoort.