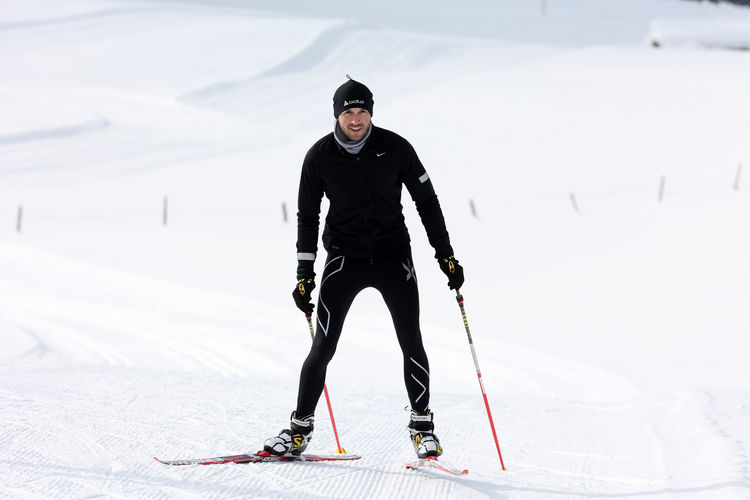 In 2015, René Rast competes for the first time in Audi’s LMP program after having previously been very successful in GT3 racing in the Audi R8 LMS ultra. At Le Mans, in June, he will be able to prove that he is physically fit even for the highest demands.

A math example illustrates what is involved at Le Mans: the deceleration on braking in the Audi R18 e-tron quattro can amount to as much as 3g. So, when the driver brakes on entering the chicanes of the famous Hunaudières straight at Le Mans a massive force acts on him – the 68 kilograms of his own weight, as in the case of René Rast, briefly turn into 204 kilos that push him into the harness. This is clearly more than in a GT3 race car.

René Rast’s preparation has included his participation in the Audi winter camp. “I had huge fun when I took part in the camp for the first time in February,” says the 28-year-old driver from Westphalia who rides a mountain bike and skis in his free time.  “I hardly knew the Le Mans drivers before. Now I got to meet the whole squad. And I experienced what Audi considers important in terms of physical preparation. It’s clear that the centrifugal forces in the Le Mans prototype are significantly higher than those in the GT3 race car.”

The cornering forces of the Audi R18 e-tron quattro put a heavy strain on the body, so Rast has designed his strength training accordingly. “Especially the neck muscles have to be well-developed,” explains the junior driver. “These sections can be trained well by using weights.” René Rast got a taste of his new task last June when he competed in an LMP2 race car of a privateer team at Le Mans.

“My previous training has provided a good base and I’m going to adjust my workout schedule to the new tasks as necessary,” says Rast. The current champion of the ADAC GT Masters racing series will experience his racing debut in the Audi R18 e-tron quattro on one of the world’s most challenging tracks of all places – the seven-kilometer circuit at Spa in Belgium. The first weekend in May in the Ardennes will also show how successful his physical preparation has been. René Rast still has fondest memories of the track from last July when he won the Spa 24 Hours in the Audi R8 LMS ultra.