Links
{{ activeItem() }}
Twitter
08/05/20
After many months of waiting, we're finally racing again in @FIAFormulaE. &gt;&gt; https://t.co/ktQ0jleme7… https://t.co/tFbpd4YT3Z
08/05/20
#BerlinEPrix at 19:04 CEST. You can still vote for #FANBOOST up to 15 min into the race. Watch &gt;&gt;… https://t.co/eKwc9ENMIP
08/05/20
“It is going to be an extremely difficult race, but we’re going to fight back. We do not give up.” – @LucasdiGrassi… https://t.co/UYUpHUjcG4
08/05/20
The current Fanboost standings: P5 @ReneRastRacing and P15 @LucasdiGrassi. Help our drivers by voting online &gt;&gt;… https://t.co/Wp3cL2Grn8
Audi Sport on Twitter
{{ activeItem() }}
Facebook
08/03/20
What a start to the DTM season it was for Nico Mueller! Race victory and he is currently leading the drivers’ standings. See how he experienced the weekend in his latest #DriversDiary. >> audi.com/DTM #PerformanceIsAnAttitude #ThanksToDTM
08/03/20
Fourth victory for the Audi R8 LMS in just two weeks, adding to podiums and victories for the Audi R8 LMS GT4 and Audi RS 3 LMS this past weekend. 🇩🇪 🇮🇹 🇺🇸 🇫🇷 >> audi.com/GT3 >> audi.com/GT4 >> audi.com/TCR #PerformanceIsAnAttitude
08/02/20
Another podium lockout for us today! Check out how the second race at Circuit de Spa-Francorchamps has unfolded. >> audi.com/DTM #PerformanceIsAnAttitude #ThanksToDTM
08/02/20
Leading the pack. >> audi.com/DTM #PerformanceIsAnAttitude #ThanksToDTM
Audi Sport on Facebook 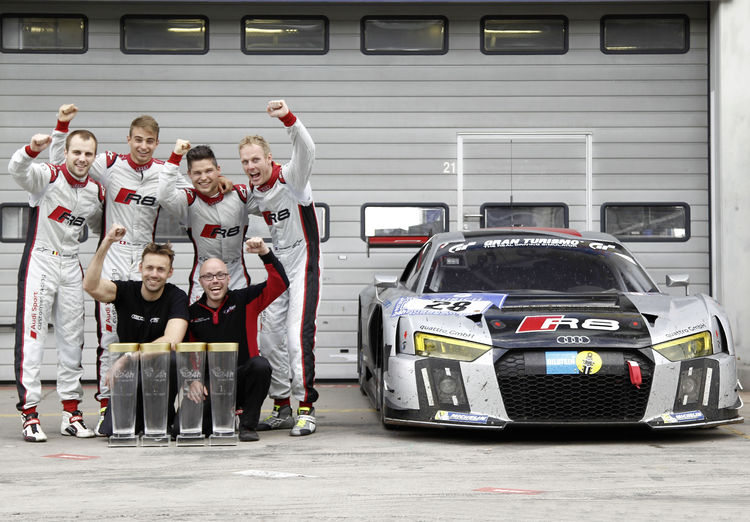 Download PDF (108 KB)
Facebook
Twitter
LinkedIn
WhatsApp
Romolo Liebchen (Head of Audi Sport customer racing): “The narrow gaps shown by the results can only give a vague idea of how thrilling GT3 racing is at the moment. We’ve experienced a weekend full of emotions, with months of hard work behind us, and all this has culminated in a hard-fought victory. ‘Thank you’ to everyone at Audi and Audi Sport customer racing, to all the teams and the drivers. This has been a solid performance. The career of the new Audi R8 LMS couldn’t have begun any better. Sincere congratulations to the Belgian Audi Club Team WRT and to our four drivers Christopher Mies, Nico Müller, Edward Sandström and Laurens Vanthoor who’ve won this race for the first time.”

Christopher Mies: “It was a tough race and a close battle with BMW and Porsche. The new Audi R8 LMS was running well. There wasn’t even the slightest problem. But during the night we lost three to four minutes due to a yellow period and, as a result, our advantage was gone. Afterwards, we really had to battle hard. BMW put us under a lot of pressure. The car was running superbly and the pit stops were brilliant. That was enough for us to win in the end with a 40-second advantage.”

Nico Müller: “It’s incredible. My three team-mates, Chris (Mies), Edward (Sandström) and Laurens (Vanthoor), did an awesome job. The team made no mistakes throughout the race and our car was running superbly. This was the first 24-hour race for the new Audi R8 LMS – and we made it across the whole distance without any problems, especially at such high speed. We were constantly under pressure and always had to give everything. This victory is a sweet reward for everyone.”

Edward Sandström: “It was a tough race with many good teams and difficult weather conditions. My friends from the Belgian Audi Club Team WRT, just like Audi Sport customer racing, did a perfect job. The team performance simply fit. The new car meant a lot of work for all of us, which paid off. Driving a whole 24-hour race without the slightest problem deserves a lot of respect.”

Laurens Vanthoor: “These were the kinds of conditions that are so typical for the Green Hell – patches of rain and a dark sky early on Saturday night. It was difficult. We were set on making it through the night unharmed and managed to do this. Afterwards, the race turned into a sprint. For me, the first victory in the new R8 LMS will be an unforgettable experience. The car has instantly been reliable. This shows how well the whole Audi squad has been working. ‘Thank you’ for this.”