Quotes after the Spa 24 Hours 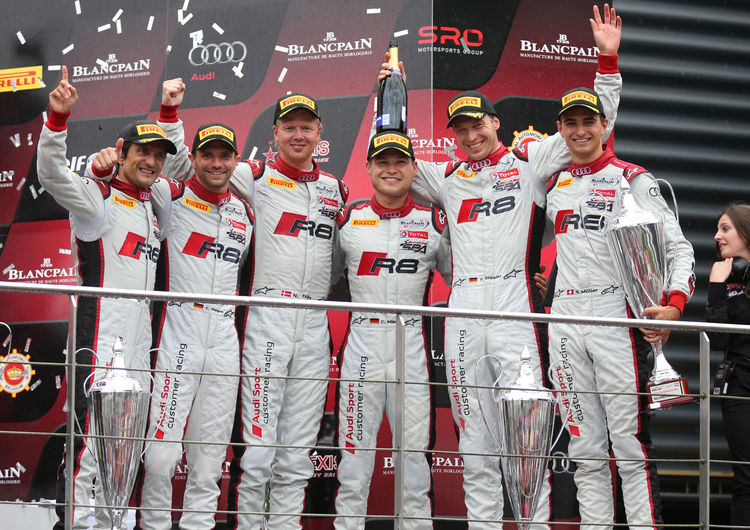 “It was another really tough 24-hour race. In the end, we achieved our goal of finishing the race with the four new Audi R8 LMS. It wasn’t quite enough for victory, but we mounted the podium with two teams. We congratulate our colleagues from BMW on their victory. They worked for it for a long time. Next time, we’re going to attack again.”

“This was my first 24-hour race at Spa. Being part of this project with the new Audi R8 LMS was fun. The double podium was a nice achievement by the whole squad. Everyone can be proud of this result.”

“I’d like to dedicate this podium result to my old friend Jules Bianchi. My team-mates and I experienced a fantastic and fair battle here. In the rain, we were faster than BMW and running in front of them. But BMW were subsequently faster on a dry track, so we still need to improve. But we finished the race and put three new Audi R8 LMS cars in the top five. Frank Stippler and I wanted to win this race together at all cost – it’s a shame we didn’t quite make it.”

“A really fantastic result. Qualifying was a nice beginning. It was an honor for me to be on pole with Audi in the face of such fierce competition. However, in car number ‘2,’ we were too slow across the race distance. The balance wasn’t perfect yet. Second place was the maximum we could extract. Congratulations to BMW on their deserved victory.”

“I hardly knew the track. The last time I raced here was in 2008, in the Supercup. And on Thursday, I was on track in the dark for the first time. In addition, after my accident at the Nürburgring, contesting a 24-hour race right in the second run was a special situation. Plus, I wasn’t familiar with the rain tire. The driver with the best feel for the car and the track should begin. That’s why I was the last driver, but that was the right decision. Having such a reliable car was a superb performance by the whole team and by Audi. That was the basis for advancing to third place.”

“We were the last to expect a podium ourselves, because we had a one-lap deficit early when we decided to use slicks and the rain started again shortly afterwards. We were unfortunate to lose another half of a lap behind the safety car. We were in position 45. At that point, third place was nothing but a dream. Afterwards, we drove our 24-hour race sort of in qualifying mode because we wanted to recover our deficit. We had a good strategy. I really like Spa and finished on podium in four events. The only thing that’s missing now is victory which, hopefully, we’re going to make up for.”

“It was nice to have the opportunity of driving the new Audi R8 LMS here. We lost a lot of time in the beginning. But I have to take my hat off to the team and the other drivers. We recovered to the front of the field. I’m happy about finishing my first 24-hour race at Spa on podium.”