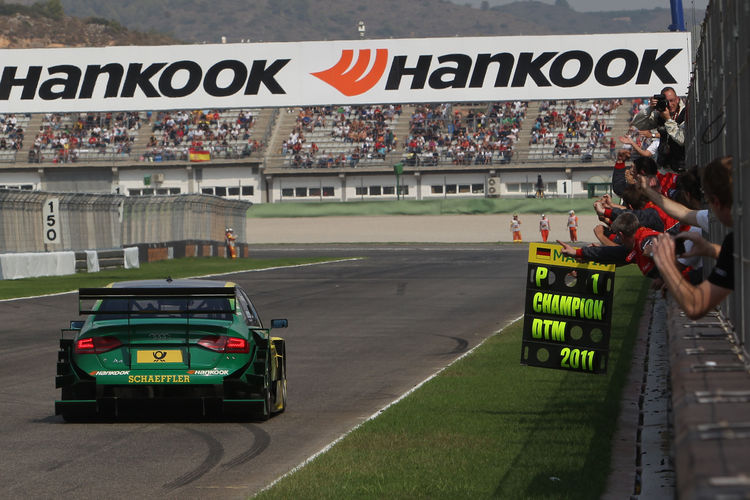 Mattias Ekström celebrates a commanding victory at Valencia in front of his Audi brand colleague Filipe Albuquerque. With a third-place finish Martin Tomczyk secures an early title win. Quotes after the Spanish DTM round.

Dr. Martin Mühlmeier (Technical Director Audi Sport)
“A fantastic result for Audi: Positions one to six and victory in the championship! The best thing for me is that Martin (Tomczyk) clinched third place with a tremendous showing on his own power. And Mattias (Ekström) has again shown an exceptional performance. Filipe (Albuquerque), last but not least, has achieved his first podium result in the DTM: simply a great weekend for Audi!”

Mattias Ekström (Red Bull Audi A4 DTM), 1st place
“Of course it’s fantastic to have won another race, particularly because it was hard work throughout the weekend. But this is not my weekend but Martin’s on which he has decided the championship early in his favor. He’s worked hard for this for many years. I’m happy for him, and of course also for his team, Phoenix, and for the squad of Audi Sport. The title shows that the patience and the trust that Dr. Wolfgang Ullrich has placed in Martin have paid off. So there are many people who can be happy today, especially at Audi Sport.”

Filipe Albuquerque (TV Movie Audi A4 DTM), 2nd place
“Having clinched second place is a really fantastic feeling. Yesterday was already a good day for me and I was able to convert my grid position into a good result today. I knew that the start would be a key to success. It was all about keeping the two Mercedes cars behind me. I wasn’t able to do anything toward the front because Mattias was simply too strong for me. So I made good use of my tires and concentrated on not making any mistakes throughout the race. Space in front and at the rear – that’s how I’d pictured the situation to be. I’m very pleased with the result today, and tomorrow I’ll start thinking about the next race. We need to continue to work step by step.”

Martin Tomczyk (Schaeffler Audi A4 DTM), 3rd place
“It’s hard to find words for my emotions. It’s definitely a very nice feeling to be DTM Champion. You’ve got to have achieved it first before you can realize that that’s what you are. Eleven years of DTM with lots of ups and downs, and in the eleventh year, together with Team Phoenix, I’ve managed to become champion. It’s been a fantastic season and real fun to drive this car and to work together with this team. Not only I have earned this title but also, first and foremost, Audi Sport Team Phoenix. But Abt and Rosberg, too, have their share in this overall Audi performance. I think we deserve a couple of parties now.”

Timo Scheider (AUTO TEST Audi A4 DTM), 4th place
“I had a good race which began with a good start. I was immediately able to overtake two cars. The performance was good. Together with the team I decided to stay out for a very long time for the first stint. I was even surprised myself that it worked out so well. Then we quickly followed with the second stop to give Martin a little help and to stay in front of the competition. That was the right decision and we finished in fourth place. The fastest race lap shows what was possible. But at Audi today was clearly about the championship. I happily filled this role.”

Miguel Molina (Red Bull Audi A4 DTM), 5th place
“The race went superbly for Audi and we won the championship here with Martin (Tomczyk). That we managed to do this already here in my country, Spain, is a great thing. My race was good, I finished fifth. I took no risk to overtake David Coulthard in the Mercedes because he was running under an appeal, which of course influences the classification. So it was just about defending my position, and I managed to do that.”

Oliver Jarvis (Audi Sport performance cars A4 DTM), 6th place
“I spent most of the race in heavy traffic. In the end, sixth place is anything but a poor result but unfortunately I didn’t have the pace to move farther to the front. That’s why I’m a bit disappointed. But I’m pleased to take the points and am now looking forward to the finale at Hockenheim.”

Mike Rockenfeller (E-POSTBRIEF Audi A4 DTM), 9th place
“Congratulations to Martin (Tomczyk) and Team Phoenix! That was the most important thing for Audi today. The mega-poor start was crucial for my result. I made a quick start but then the wheels spun. I’ve always had good starts this year but today was a catastrophe. I feel very sorry for the team because a result among the top five and thus important points would have been possible today.”

Rahel Frey (Glamour Audi A4 DTM), 14th place
“It wasn’t an easy race for me. Susie (Stoddart) had brushed me in the first turn and then I unfortunately dropped to 18th place. I had a difficult first and second stint and was struggling extremely with the car. The final third was nearly perfect and the lap times were also more competitive. That had already been the trend at the last races and we need to continue to work on this for Hockenheim so that we can make more progress at the finale.”

Edoardo Mortara (Playboy Audi A4 DTM), 16th place
“A difficult race for me. In the end we had tire problems and I was heavily struggling with the car. After my mistake in qualifying the weekend on the whole was a disaster. But I’ll strike back at Hockenheim at the finale. I’m not worried that we won’t be able to make a good showing there because the performance potential exists. I’m very happy for Audi Sport Team Rosberg and my team-mate Filipe (Albuquerque) that he managed to clinch a podium result. And of course for Martin (Tomczyk) for having decided the championship early in his favor.”

Hans-Jürgen Abt (Team Director Audi Sport Team Abt Sportsline): “It’s been an absolutely tremendous day for Audi and for the drivers. ‘Well done’ to Martin Tomczyk; he did a fantastic job, but it probably wouldn’t have been possible this way without the whole team having worked for him. Mattias (Ekström) showed a sensational performance. But what counts in the end are championships – and Martin is the one who clinched it.”

Ernst Moser (Team Director Audi Sport Team Phoenix): “A dream has come true. After many years of hard work and lots of setbacks we have clinched the title as Team Phoenix. Many thanks from us to Audi for the fantastic car. Martin is a great driver, he never made any mistakes in the race and neither did the team. We’re champion one race before the season ends. We’re enjoying this success and are traveling to Hockenheim completely relaxed.”

Arno Zensen (Team Director Audi Sport Team Rosberg): “Congratulations to Martin Tomczyk, Ernst Moser and Audi for winning the championship. We’re happy today as well. As Team Rosberg we managed to clinch three consecutive podium finishes and now Filipe (Albuquerque) has celebrated his first podium position as well. The only thing we’d need now to be perfectly happy is a victory at Hockenheim.”