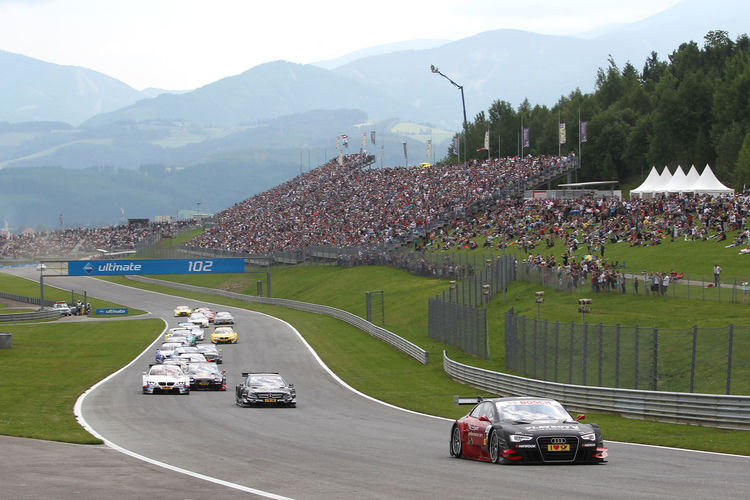 Jubilation at the Audi camp: Edoardo Mortara secured his first victory at the Red Bull Ring and celebrated the first triumph of the new Audi A5 DTM. Quotes after the race.

Dr. Wolfgang Ullrich (Head of Audi Motorsport): “That was a fantastic race. With a strong team performance and victory by Edo (Mortara) and the Rosberg squad we showed that we’re back in contention for victory. The pole position yesterday and victory today plus five Audi cars in the top ten underscore that Audi is back again. We’ll continue to work hard on maintaining this. This result was the best way of thanking the squad that has been working extremely hard.”

Edoardo Mortara (Playboy Audi A5 DTM), 1st place
“After the best time in yesterday’s qualifying, my first victory today – that’s a very special moment for me. But for Audi, too, this is a great moment in the new DTM era. And for Team Rosberg it’s fantastic also. I can hardly find words for this wonderful situation. After a few difficult weekends I wouldn’t have necessarily expected to win. You always try and give your best and today we achieved the maximum.”

Mattias Ekström (Red Bull Audi A5 DTM), 4th place
“I had a very good start in the race but then unfortunately lost a few places on lap one. In the end, I finished in fourth place. It’s definitely a bit disappointing that I didn’t finish on podium and manage to score big points. But twelve points from Spielberg and second place in the championship are good. The most important thing today, though, was that we were very competitive.”

Timo Scheider (AUTO TEST Audi A5 DTM), 6th place
“All in all, this was a sensational race. I made up two places right at the start. The restart after the yellow period went well too. After a few laps I was running alongside Augusto Farfus when braking into turn 3. When he was behind me he touched the left rear corner of my car and heavily offset it in the process. That’s why I flew into the gravel trap and stopped just before hitting a tire wall. I managed to turn around and free myself again. But it was frustrating to run 200 meters behind the field. But our performance was sensational, the car was awesome. I’ve never had such a good car in a race this year. With a good strategy and two perfect pit stops we recovered ten places today. That was sensational under these circumstances!”

Mike Rockenfeller (Schaeffler Audi A5 DTM), 7th place
“That was one of the craziest races I’ve ever experienced in the DTM. The first lap was very turbulent. Congratulations to ‘Edo’ and to Team Rosberg on winning. I also want to thank my team. We had a tough weekend. Considering this, I’m really happy with seventh place in the race. I had huge fun in the car; we battled and I was able to move forward with a good strategy. The points were important.”

Filipe Albuquerque (TV Movie Audi A5 DTM), 8th place
“A very hard race. I was behind Bruno Spengler when his car was damaged, which caused us to lose a lot of time. That was a shame. As a result, I also lost against Joey Hand and got stuck behind him. Due to our strategy we lost against Timo Scheider too. My car was fantastic, our pace was really good. But I couldn’t achieve more than eighth place. I think a place among the top five would have been possible.”

Rahel Frey (E-POSTBRIEF Audi A5 DTM), 15th place
“That was really thrilling and exciting – I was finally able to join the battle. This was really good for me and for my self-confidence. Unfortunately, the pit stops weren’t very good and I was too fast on exiting the pit lane for which I received a drive-through. But my race pace was right again and it was really good fun. Let’s continue this way!”

Miguel Molina (Red Bull Audi A5 DTM), retirement
“I had a really good start and overtook a few rivals right on the first lap. After the safety car period I wanted to attack again but my car got damaged a bit. I tried to continue but the damage to my car was too severe. That’s why we decided to go to the pits in order to keep from causing even more damage.”

Adrien Tambay (Audi ultra A5 DTM), retirement
“My start was very good, and so was turn one. But then there was a pretty heavy commotion. There were many cars running on the same line. I decided to run on the outside. Unfortunately, I was pushed into the grass and my race was over.”

Hans-Jürgen Abt (Team Director Audi Sport Team Abt Sportsline): “First of all, congratulations to Edoardo Mortara and Team Rosberg. Audi did a tremendous job today in every respect. The car was perfect today. Five Audi A5 DTM cars among the top eight is a fantastic team result. With Mattias Ekström we’re in second place of the championship. That’s a good starting base for the other races. And there are still a few rounds on the calendar. A successful day for Audi – let’s continue this way.”

Ernst Moser (Team Director Audi Sport Team Phoenix): “A brilliant weekend for Audi with the first victory of the year. A huge compliment and ‘well done’ to Edo (Mortara) and Team Rosberg. But the other Audi drivers were quick as well and there are five A5 DTM cars in the top ten. The race pace was good, so we managed to bring ‘Rocky’ forward from 13th to seventh place. We can all be happy about this overall result Audi has achieved. Now we’ll have a big party.”

Arno Zensen (Team Director Audi Sport Team Rosberg): “That was the longest hour of my life! ‘Thank you very much’ to everyone – to ‘Edo’ and the team and to the Audi squad. The work done over the past four weeks was incredible. I’m very happy about this victory.”