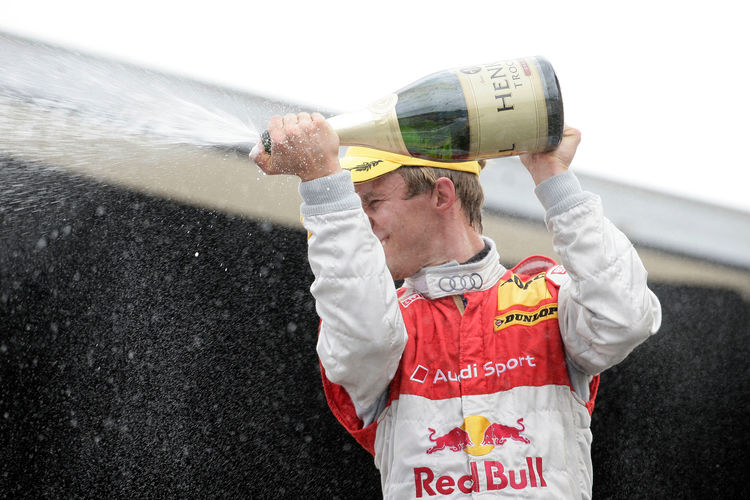 Audi was lacking just 1.678 seconds to clinch the coveted “home victory” at the Norisring. Quotes after one of the most thrilling DTM races in recent years.

Dr. Wolfgang Ullrich (Head of Audi Motorsport)
“That was premium motorsport today and one of the best touring car races in recent years. Anyone watching the race from the grandstands at the Norisring or on TV was able to witness everything the DTM stands for: tough duels on the track, various strategies and fantastic pit stops. Everything almost worked out for us but in a nail-biting fight during the final 15 laps, which also included a number of body contacts, we lost the race. We were leading the race almost the whole time and came so close to clinching our first victory at the Norisring in seven years. So this business remains unfinished.”

Mattias Ekström (Red Bull Audi A4 DTM #5), 3rd place
“My goal was to win the race today. And before the start I also had a good gut feeling that it might work out that way. Of course starting from positions one and two and then finishing only in third and fourth place is a huge disappointment for Timo (Scheider) and me. Seeing to many Audi fans in the grandstands, driving a great race and then losing makes me really angry. But we’ve got to look ahead now: Timo is leading the championship, and I’m just three points behind him – so the suspense will continue. And we’ll strike back soon.”

Timo Scheider (GW:plus/Top Service Audi A4 DTM #1), 4th place
“Both my body temperature and the duels were hot. It was a hard race across 80 laps. Due to my bout with the flu I felt anything but well but didn’t notice it that much while driving. The pit stops were good and I kept my lead. Toward the end the rear balance was degrading. My rivals ‘ate me up’ and Jamie Green even pushed me. I went wide and so the whole pack passed me. Frustrating, but that’s how things go.”

Tom Kristensen (100 Jahre Audi – A4 DTM #2), 8th place
“Of course I’ve have preferred scoring more than one point. But that was difficult from position nine on the grid. The cars were very close and all were at a similarly high level. My car was very good on new tires. Unfortunately, the rear tires and the brakes overheated. I spent the whole race behind a white Mercedes.”

Mike Rockenfeller (S line Audi A4 DTM #11), 9th place
“In the first section of the race I had to fight and wasn’t able to find the right rhythm, but the second and third were super. The car was great to drive, my speed was good and the pit stops were a class act. The strategy was right too. Eighth place would have been possible theoretically. I was much faster than Tom (Kristensen). But I would have really had to force the issue, even though I was running alongside him once in front of the Schöller-S. I was on the worse side and had to give in. I probably would have fought harder against a Mercedes.”

Martin Tomczyk (Red Bull Cola Audi A4 DTM #6), 11th place
“As sad as it may sound: This was a typical Norisring race for me with an eleventh-place finish. My car was not handling well. I tried to keep it on the track. That’s how I drove for 80 laps, never having a chance to keep up with the pace of the front runners. It was just about finishing the race. I hope that, finally, at Zandvoort things will be going better again.”

Katherine Legge (Audi Collection A4 DTM # 21), 12th place
“It was a very interesting race, with mixed feelings. The start was a massive disappointment. I stalled the engine because the car wanted to start moving but I had to keep from jump-starting. So I guess that now I’ve got to practice starting again. My qualifying keeps improving this season. I also posted the fastest race lap. That shows that my speed is right. I’ve got to eliminate a couple of mistakes now, and then quite a bit will be possible.”

Markus Winkelhock (Playboy Audi A4 DTM #12), 13th place
“On the first lap I was fortunate enough to slip through a gap between Jarvis and the wall. Other than that, my race was boring. My brakes started degrading after ten, twelve laps. Every time I caught a car the brakes got even hotter. And each time the car in front of me was an Audi so I didn’t want to force the issue. My guys deserve big praise. After yesterday’s accident they did a super job and worked through the whole night. In the warm-up the car was running well right away and in the race, too, as if nothing had happened. Well done!”

Alexandre Prémat (Audi Bank A4 DTM #14), retirement (accident)
“A nice race – up to the mid-point. It was great and there were a lot of nice fights with Tom (Kristensen), Ralf (Schumacher) and Paul (Di Resta). Unfortunately, Paul did not give me enough room on one such occasion. I perfectly braked into the turn but he pushed me into the guard rail. The steering broke in the process and I had to give up my race. The positive thing is that our pace today was good.”

Oliver Jarvis (Audi Cup A4 DTM #15), retirement (accident)
“The race was over for me quickly. My start was okay. I took it easy on the first turn because the race would be long. In the chicane I narrowly approached the apex and entered the straight with a nice speed. Kostka made a mistake and spun at the end of the turn. He hit the right rear of my car and that’s why I spun into the wall. That was my race.”

Hans-Jürgen Abt (Team Director Audi Sport Team Abt Sportsline
“For the spectators, it was great but not so much for us because we were leading almost up to the end of the race and then didn’t win after all. We’ve got to live with that. For the sport, it was fantastic. You’ve got to see the positive side of things as well: We were very strong here. And now Zandvoort is coming up – I see Audi having an advantage there.”

Ernst Moser (Team Director Audi Sport Team Phoenix)
“Too bad that Oliver (Jarvis) wasn’t even able to finish even one lap. It’s crazy how some people drive. This should be subject of some serious discussion some time. The second point of the day: Alex (Prémat) was finally fully able to keep the pace of the race again. After a superb start he was running in eighth place. I think we could have kept that up until the finish. One or two points would have been possible today. That makes it even more regrettable that Di Resta did not leave him any room during his overtaking maneuver. Unfortunately, that also caused us to lose our car.”

Arno Zensen (Team Director Audi Sport Team Rosberg)
“Amidst our major misfortune on Saturday we also had the fortune of being able to prepare Markus’s (Winkelhock) car again. He drove a decent race. More was not possible. A really big thank you goes to the squad. They did a sensational job. That was a class act. ‘Rocky’ drove a very good race. He posted faster times than the front runners and finished only ten seconds behind the winner and very narrowly missed a point finish - an unrewarded achievement.”