Quotes after the race at Spa 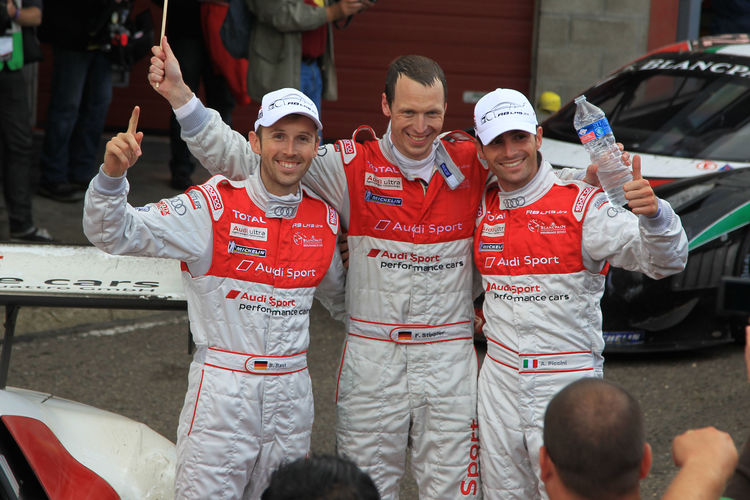 One-two victory for the Audi R8 LMS ultra at the Spa 24 Hours. Quotes after the race from the Audi camp.

Dr. Wolfgang Ullrich (Head of Audi Motorsport): “It’s a fantastic result to be at the very top of the podium here at Spa with two Audi R8 LMS ultra cars – particularly with the cars of both teams. Audi Sport Team Phoenix managed to also win the Spa 24 Hours. It was very close because last year’s winner, WRT, did a superb job. In the end, fortune played a part to some extent too. It was a shame that the second WRT Audi retired due to an accident shortly before the end while running in a good position. It was especially sad that the three Le Mans legends were deprived of the chance for victory so early – all the more impressive was their recovery from position 63 to sixth place. At Audi, we’ve now managed to win all three major European 24-hour races in one year. I think nobody has achieved this feat up to now.”

Werner Frowein (quattro GmbH): “The joy is huge about Audi having managed to win a 24-hour race three times in succession – at the Nürburgring, at Le Mans, and now here at Spa. That’s sensational. In addition, a large number of customer teams were on the grid here – and running all the way to the finish.”

Romolo Liebchen (Head of Audi Sport customer racing): “This is another great day for Audi customer sport. After the first victory at the Nürburgring, the Audi R8 LMS ultra has won another major endurance race here. We’re proud of having had six customer teams on the grid here at Spa as well. Some of them have celebrated nice successes. We worked hard together with them for these results. I’m convinced that next year a large number of customers will be here and tackle the race again.”

Ernst Moser (Team Director Audi Sport Team Phoenix): “As expected, it was an extremely difficult race – due to the strong opponents, due to the weather and, last but not least, the brand-internal competition with WRT. This continued through to the last hour. That after the historic victory at the Nürburgring we’ve now won another 24-hour race is fantastic. I’m overjoyed and thank my entire squad and our drivers. My thanks also go to Audi for making it possible for us to field such powerful cars at such great events.”

Vincent Vosse (Team Director Audi Sport Team WRT): “As we’d been expecting: it was a tough race. Everyone who finished can be proud. We battled hard; the drivers did a tremendous job. But we were a little unfortunate with a safety car period. Phoenix made no mistakes in this respect and that was the key to victory. Last year, there was one Audi on podium, and this year two. The goal for next year will be to see three Audi cars on podium here.”

Andrea Piccini, Audi R8 LMS ultra #16 (Audi Sport Team Phoenix), 1st place:
“I’ve often tried to win this race – today I finally managed to do so. I’m simply happy, that’s all. It was a great race and a great battle for victory. My thanks go to Audi and to all the guys at Phoenix for their fantastic commitment.”

René Rast, Audi R8 LMS ultra #16 (Audi Sport Team Phoenix), 1st place:
“All I can say is I’m simply happy. This was my first 24-hour race here at Spa – and I immediately won it. It wasn’t an easy victory because we had difficult conditions especially in heavy rain. Our car was fantastic and the guys in the pits always made the right decisions and on top of that performed absolutely perfect stops.

Frank Stippler, Audi R8 LMS ultra #16 (Audi Sport Team Phoenix), 1st place:
“A really nice success. We started from position 29 and had to take some risks to overtake the cars in front of us. In fact, there were some fierce attacks and I had some concerns. But the R8 LMS ultra was absolutely stable. I’m happy that I’m able to celebrate this exploit with Audi, such an outstanding team and my two fantastic team-mates René Rast and Andrea Piccini.”

Christopher Haase, Audi R8 LMS ultra #1 (Audi Sport Team WRT), 2nd place:
“That was a tough race with very difficult conditions. Lots of rain, many safety car periods – you always had to be careful not to make the slightest mistake. The teamwork among us drivers, but also the cooperation between the two teams Phoenix and WRT was perfect and really good fun. The one-two result in the end is a nice reward. I want to thank Audi for letting me be part of this.”

Christopher Mies, Audi R8 LMS ultra #1 (Audi Sport Team WRT), 2nd place:
“An exciting race! We gathered many leading kilometers with our car but also suffered some misfortune in a few crucial moments when we lost a lot of time during the safety car periods. But sometimes that’s the way racing is. Today, we clinched a one-two victory for Audi – you really can’t do any better than that, can you?”

Stéphane Ortelli, Audi R8 LMS ultra #1 (Audi Sport Team WRT), 2nd place:
“The one-two victory at such a famous and important race is an outstanding success for Audi. We fought a fierce battle for 24 hours and the better one won in the end – ‘well done.’ Maybe, in terms of strategy, we were a bit unfortunate at times. But driving this car on this track was simply a pleasure. I really enjoyed the weekend with my two Christophers (Haase and Mies). I’m hoping for us to again get the chance of contesting such a race together. I’d like to thank WRT, Phoenix and Audi – all can be proud of their performance.”

Marcel Fässler, Audi R8 LMS ultra #6 (Audi Sport Team Phoenix), 6th place:
“Congratulations to Audi and Team Phoenix. The whole team of car number 16 did a superb job. We on the other hand were a bit unfortunate in the first hour. Afterward you could see that our speed was great. So we made the best of it and can be pleased. We’re definitely proud of having recovered to sixth place from the far rear of the field. And our rookie Tom Kristensen did a brilliant job. I think he’s got a great future in the endurance racing scene ...”

Tom Kristensen, Audi R8 LMS ultra #6 (Audi Sport Team Phoenix), 6th place:
“What a race! This weekend really offered a bit of everything – from heat to incredible rainfalls. Our team was among the front runners in all sessions and in all conditions: night practice, warm-up, the race. As a rookie, I had a lot of fun and am proud of our performance. If you mentally add the twelve laps we lost due to André’s accident in which he wasn’t at fault, quite a bit would have been possible for us. A great showing of the whole Audi squad.”

André Lotterer, Audi R8 LMS ultra #6 (Audi Sport Team Phoenix), 6th place:
“A fantastic day for Audi with a great victory. Our car was the only one with a great deal misfortune so that we lost a lot of ground right in the first hour. In the collision I had no chance. The other car suddenly went right across the track and I was simply there. The guys in the pits did a superb job and repaired the car in record time. Afterward, we were actually just aiming to make it onto the first time-taking monitor, in other words into the top 20. In the end, we even finished in sixth place. So if you start figuring what would have been possible for us without the accident …”

Marco Bonanomi, Audi R8 LMS ultra #2 (Audi Sport Team WRT), retirement:
“It was a great race until we retired four hours before the end. But things like this happen and now we’ve got analyze what happened. I’m pleased, though, because we three drivers showed a good performance. The race was extremely tough, particularly in pouring rain at night. The team did a perfect job. The retirement makes me feel particularly sorry for the team. It was so motivated and would have deserved a podium finish.”

Edward Sandström, Audi R8 LMS ultra #2 (Audi Sport Team WRT), retirement:
“I had a good race up until my accident. The Audi R8 LMS ultra functioned really well. I was happy with the set-up, the car was very easy to drive, especially in the morning when I was driving a triple stint. Unfortunately, I was briefly lacking concentration before the accident because a problem during the pit stop had distracted me and then I made a mistake. The impact was heavy but the car is very safe. Naturally, the retirement was disappointing but mistakes simply happen. I’ll try and learn from this for the future.”

Laurens Vanthoor, Audi R8 LMS ultra #2 (Audi Sport Team WRT), retirement:
“This was my first 24-hour race. It was an honor for me to compete with such a good team and such strong and experienced team-mates. We put a lot of pressure on our rivals but unfortunately lost a lap early in the race due to a safety car period. It was hard to make this up again. After a crash we were unfortunately unable to finish the race. Without the accident, a podium place would have been possible.”