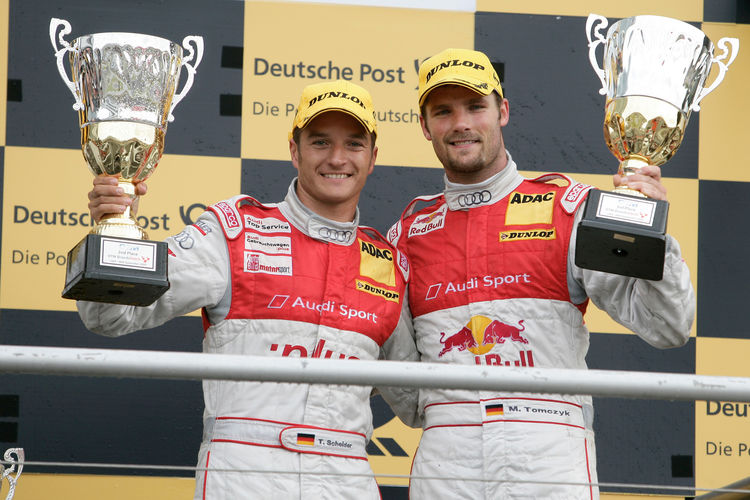 Dr. Wolfgang Ullrich (Head of Audi Motorsport)
“I’m very satisfied with the overall result. It was a strong team performance having three cars finish among the top five. Two of our drivers mounted the podium. Timo (Scheider) was able to extend his lead of the championship. All in all, we can be happy with the race weekend. Of course it’s always nicer to go home with victory. We’re planning to do everything to achieve this goal again in the next race at Barcelona.”

Timo Scheider (GW:plus/Top Service Audi A4 DTM 2009 #1), 2nd place
“I concentrated on the start and the start did go well, but on the outside I chose not to take any risk against Paul (Di Resta). So, I was a good boy and got right in line. I had no problem following him. Then the small chaos broke loose. There was a lot of traffic, even at the first pit stop. At the second stop, there was a problem at the right rear. Things weren’t so easy today. That’s why I’m very happy with second place. This has enabled me to extend my lead of the championship.”

Martin Tomczyk (Red Bull Cola Audi A4 DTM 2009 #6), 3rd place
“Advancing from fifth to third place is a good showing because overtaking is difficult at Brands Hatch. The whole strategy fit, and so did the whole race as a matter of fact. I had a great duel with Bruno (Spengler). That was tough but I was a step ahead and managed to overtake him. I’m also happy about our team performance. Timo (Scheider) was able to extend his lead of the championship. That was our goal.”

Mattias Ekström (Red Bull Audi A4 DTM 2009 #5), 5th place
“Honestly speaking, my race was pretty boring. I started from position seven and had a good start. Still, I wasn’t able to prevent Gary Paffett from overtaking me. In the second turn a Mercedes pushed me onto the grass a little and I lost a position. After that, nothing else happened. I drove as best I could. The car felt very good. I definitely had the pace of the front runners. When you start from seventh and run in eighth place after the first lap you can be happy to finish in fifth place.”

Mike Rockenfeller (S line Audi A4 DTM 2008 #11), 7th place
“In the warm-up my car was great to drive. It was really a lot of fun. In the race I was struggling with under-steer, which was partially due to the fact that I was following other cars. I don’t know if it was just a matter of our lack of down-force or whether our set-up was not optimal for the temperatures during the race. In any event, it was a good race. I’m satisfied. ‘Thank you’ to the team for two great pit stops. Starting from twelfth on the grid and finishing in seventh place is okay – you can’t do any better than that.”

Oliver Jarvis (Audi Cup A4 DTM 2008 #15), 8th place
“That was a tough race. I’m upset because I don’t know what Jamie (Green) was planning. This has been the second time in two years now and pretty foolish on his part. Otherwise, we could have scored a lot more points because my start was very good. After retiring twice I was very cautious. I was determined to finish the race. The first section was a bit difficult. In the second and third ones things were going very well. Without Green’s attack a lot more would have been possible. I fought hard to score a point. The team performed two good stops and can be happy.”

Alexandre Prémat (Audi Bank A4 DTM 2008 #14), 11th place
“That was a difficult race from start to finish. I received a drive-through penalty for jump-starting. Afterwards, our strategy was very good and I kept moving forward. The car was quick. Eleventh place after a drive-through is still a pretty good result.”

Katherine Legge (Audi Collection A4 DTM 2008 # 21), 15th place (30-second time penalty)
“I think it was a good race in terms of lap times. I was running well. On the first set of tires I had heavy over-steer after ten laps. That was a bit difficult but the other two sets were really good. The times were good but then I was given a penalty for allegedly obstructing Paffett. I saw three blue flags in two turns. I don’t know what they expected me to do – apparently I should have vanished into thin air. That was disappointing.”

Markus Winkelhock (Playboy Audi A4 DTM 2008 #12), 18th place (accident)
“My start was pretty bad. I almost jump-started and had to push the clutch pedal once more. That’s why I didn’t get away perfectly. In the first corner someone hit the left rear of my car. As a result, the suspension was a little crooked. Other than that, the car was quite okay in the race. Unfortunately, Ralf Schumacher shot me off the track after the safety car period. That meant the end of my race.”

Tom Kristensen (100 Jahre Audi – A4 DTM 2009 #2), 19th place (accident)
“Directly after the start Spengler pushed me toward the guard rail. I had to lift, he even touched me and a few components broke. On the first set of tires I had no grip whatsoever. Of course that helped ‘Eki’ move forward some more. On the next set things were going better and I maintained sixth place up to retiring. Spengler heavily hit the right rear of my car, broke off the entire corner and pushed me off the track. My race ended in the circuit barrier – a rough day.”

Hans-Jürgen Abt (Team Director Audi Sport Team Abt Sportsline)
“That was drama in every respect with many ups and downs. But the team did a superb job. ‘Well done’ to Timo, Martin and ‘Eki’ – they really drove a tremendous race, and so did Tom, by the way. Bruno Spengler’s action with him was pretty unnecessary. I can’t understand why he didn’t receive a penalty for this, especially after pushing Tom off the track already at the start. Still, we’re happy and have a good lead of the championship. That was our goal. We’re looking forward to the next race.”

Ernst Moser (Team Director Audi Sport Team Phoenix)
“That was a thrilling race. In the beginning, we had a few things going against us. Oliver (Jarvis) was turned around by Jamie Green, which was very unfair. This threw him back but we were able to push and make up ground again. Ultimately, we finished eighth in a turbulent final stage of the race. Our pace was always good and we never gave up. It’s nice that this was well-rewarded. Alex (Prémat) was too optimistic at the start. That pretty much ended his chances in the race. We still wanted to find out what pace we’d be able to keep. Alex was very happy with the car, but you can’t move forward very much any more in a situation like this. From this perspective, eleventh place isn’t even that bad.”

Arno Zensen (Team Director Audi Sport Team Rosberg)
“I’m upset. We could have had both drivers finish in the points for the first time if Ralf Schumacher had avoided this unnecessary action. I’m happy for Mike (Rockenfeller), who was finally able to drive a full race. The start and finish were okay, the pit stops worked well. ‘Many thanks’ to all.”