Quotes after the Audi victory at Le Mans 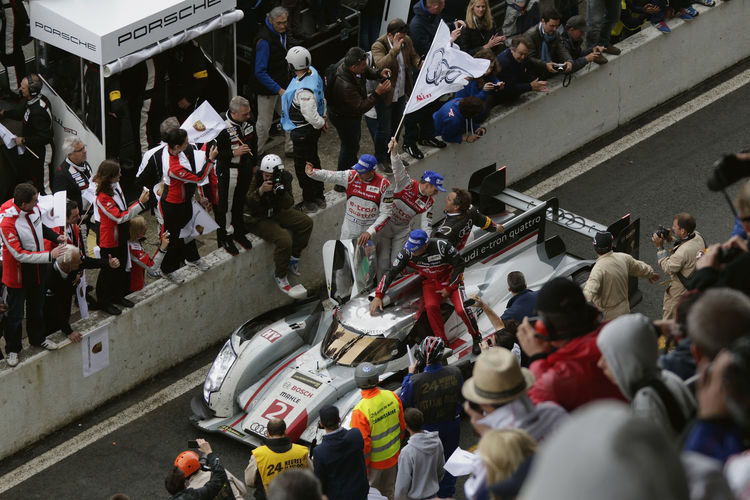 In a dramatic race, Audi achieved its twelfth victory at the Le Mans 24 Hours. Quotes on the triumph of the Audi R18 e-tron quattro in the world’s most important endurance race.

Dr. Wolfgang Ullrich (Head of Audi Motorsport): “That was the most difficult race I’ve experienced in my 15 Le Mans years. One reason, no doubt, was having to see a young race driver from Denmark lose his life this weekend. We’re feeling with his family. But the race itself was unusual too. For 24 hours straight, our drivers had to cope with changeable weather and adjust to new conditions over and over in a very short period of time. Consequently, the team in the pits and along the pit wall didn’t have any time to rest – I can’t recall ever having experienced anything quite like this. The entire squad showed an incredible performance in an extreme situation this weekend – I’m proud to be a part of it.”

Chris Reinke (Head of LMP): “After a dramatic beginning, we had a great battle on track. Various technologies competed against each other in the most difficult weather conditions and fought an open battle all the way to the final hours. We’d expected such a race and were extremely well prepared for it – so the Audi R18 e-tron quattro deserved mounting the very top of the podium today.”

Ralf Jüttner (Technical Director Audi Sport Team Joest): “This was the craziest Le Mans we’ve ever experienced in terms of the weather and the safety car periods. You never knew what the deal was. But it was an incredible thrilling race all the way to the end. We had an absolutely flawless car and that was enough to beat Toyota. We knew before the race that to beat such an opponent everything had to fit. With our number’2’ car, this was the case. Congratulations to Tom (Kristensen) on his ninth victory and to Allan (McNish) on his third success at Le Mans. I’m also happy about Loïc (Duval) being able to celebrate his first victory here. This evokes unique emotions. ‘Thank you’ to Audi Sport and of course to my whole team, including the guys from the other two cars. They all worked hard for this success. Unfortunately, number ‘3’ had enemy contact and thus dropped back. Our number ‘1’ was even the fastest car in the field but was simply unfortunate with some damage. That goes to show that it also takes luck to win here. Congratulations to Toyota, who forced us to fight a fierce battle. That deserves respect.”

Loïc Duval (Audi R18 e-tron quattro #2): “Le Mans is a great race that evokes so many emotions and is so tiring. Now I’ve really got to restrain myself to keep from shedding tears. It was a difficult race in which we unfortunately lost someone (Allan Simonsen). Since last year, the whole team has been giving everything and prepared an outstanding car for us. This is my first Le Mans victory – together with Tom Kristensen and Allan McNish. A really great moment in my career!”

Tom Kristensen (Audi R18 e-tron quattro #2): “For me, Le Mans was filled with very personal emotions this time. I’m proud to drive for the world’s best team. This applies to all team-mates, all employees in Ingolstadt and Neckarsulm and for Audi Sport Team Joest. They make it possible for us to realize a dream. Now this dream has come true again – winning the fastest and toughest race under the direction of Dr. Wolfgang Ullrich. Unfortunately, we lost someone yesterday (with Allan Simonsen) who had the same dream. He was a very modest and nice person. That’s why I’m experiencing highs and lows this time. With respect to my ninth victory: I’m driving with determination and the ambition my father inspired in me. He died in March. Before his death, he told me that I’d win Le Mans this year with my team-mates. I’m hoping that one day I’ll be able to celebrate another victory with Loïc and Allan that I can dedicate to my father. Because this Le Mans success I’m dedicating to Allan Simonsen.”

Allan McNish (Audi R18 e-tron quattro #2): “Our pace was right this year. The 2013-specification Audi R18 e-tron quattro is simply very, very good. The engineers did a perfect job in the winter. We were here on the test day. Loïc Duval’s lap time and the confidence that Tom Kristensen and I had in the car gave us a good feeling. That’s why for us it was about being careful and driving a clean race throughout – without additional pit stops. Except for a puncture on Tom’s stint our run was perfect for 24 hours straight. There aren’t too many races like that at Le Mans. And we had strong competition in the form of our ‘sister car’ and by Toyota.”

Lucas di Grassi (Audi R18 e-tron quattro #3): “I drove at Le Mans for the first time. The track is really unique. It’s very fast and incredibly difficult to learn and to understand as well. But the atmosphere, the fans and the effort that all the teams invest into this one race are impressive. You can feel the great confidence which Audi has in us. Especially for me as a newcomer, the race wasn’t easy. But I gave my best. We even finished on the podium, which is really a great feeling. I learned a lot and would very much like to run here again in the future.”

Marc Gené (Audi R18 e-tron quattro #3): “What a fantastic result for Audi. Unfortunately, our squad lost two laps at the beginning of the race due to a damaged tire valve. As a result, Oliver (Jarvis) had to complete a whole lap on three wheels. Afterward, we benefited from a safety car period to repair the car. Congratulations to our Audi winners as well as to Toyota on a great race and to my team-mates Lucas (di Grassi) and Oliver, who drove a good race in difficult conditions.”

Oliver Jarvis (Audi R18 e-tron quattro #3): “The whole race was very difficult. Fortunately, my team-mates handed the car over to me in a promising position. We knew that to finish on the podium we had to give everything. And that’s exactly what we did in the final 18 hours. We watched the distance to the Toyota and knew that we’d have to be at least 1.2–1.4 seconds faster per lap to catch up to it. I always drove at the limit, which wasn’t easy as the conditions kept changing. That was very challenging because in front of a turn you never knew what was awaiting you. It was arguably the most difficult race I’ve contested so far. I’m happy about third place. But it’s also a bit frustrating that we lost two laps due to a collision. ‘Well done’ to the team of Audi’s car number ‘2.’ Tom, Loïc and Allan They drove a flawless race. But I congratulate Toyota as well, who were a strong rival.”

Marcel Fässler (Audi R18 e-tron quattro #1): “Congratulations to the whole squad of the winning car. They had a flawless weekend, were always super-fast and therefore deserved winning. Unfortunately, we had a small technical problem that caused us to lose a lot of ground. Afterward, we attacked. The car was perfect and we really enjoyed it. We made up a bit of ground but unfortunately it wasn’t enough to be able to attack again at the very front. But that’s secondary – the most important thing is that Audi won.”

André Lotterer (Audi R18 e-tron quattro #1): “This is a great day for Audi. Congratulations to the team of number two. I’m particularly happy for Loïc (Duval), because he’s been a good friend of mine for a long time. I recommended him to Audi Sport and it’s fantastic that he managed to clinch this success. But the ninth Le Mans victory by Tom (Kristensen) is an impressive achievement as well. For us, the race took an unfortunate course. That was a shame because we had an absolutely fast car. Unfortunately, we lost the lead due to a technical problem. Afterward, Ben, Marcel and I gave everything again but with a twelve-lap gap, it’s very difficult to advance again to the far front. The main thing is that an Audi has won. We’ll try it again next year.”

Benoît Tréluyer (Audi R18 e-tron quattro #1): “This was a particularly tough 24-hour race at Le Mans this year.  The entire squad did a superb job and we had an outstanding car. But to win here, simply everything’s got to fit – and it didn’t in our case this year. We were simply lacking the necessary fortune. Otherwise we could no doubt have been in contention for victory here. ‘Well done’ to the team of our sister car designated as number ‘2’ that drove a great race and clinched the well-deserved victory for Audi.”